Remember This? The Confederation Train

As we begin the year 2017 we look forward to the celebrations being planned to commemorate our 150th birthday as a country.  Looking back to 1967, our country’s 100th birthday, there were many celebrations held throughout that year, including the Confederation Train.

The Confederation Train travelled the country in 1967 and was intended to remind Canadians that Canada’s early growth as a nation depended on the construction of rail lines to link the provinces. For several decades following its construction in 1885, the railway was the only means of transportation connecting and uniting regions with major cities. Building a transcontinental railway was the “National Dream” of Prime Minister John A. MacDonald.

In exchange for joining Canadian Confederation, provinces were promised a railway link that would connect the western provinces to the eastern part of the new country.  Construction of the railway provided work for hundreds of thousands people, in addition to establishing Canada’s reputation abroad and encouraging colonization. The railway transformed the new country of Canada into a competitive economic force.

The Confederation Train was funded by the Government of Canada through the Centennial Commission and began its journey on the west coast at Victoria, B.C. on January 9, 1967 and moved eastward until it reached the Maritimes on October 26, 1967.  After visiting the Maritimes it turned around and ended its itinerary in Montreal on the evening of December 5 after stopping at more than 60 towns and cities across Canada, including Sault Ste. Marie.

The train included a diesel locomotive and eight coaches loaned by the Canadian National Railway. The Centennial symbol was painted on the nose of the diesel locomotive directly under the headlight and the locomotive horn was distinctive because it sounded the first four notes of ‘O Canada’.

The interior of the six exhibit cars used sight and sound to create an adventure leading visitors through Canadian history.  It took three years to plan and another one to build. The train was a moving panorama of Canada from pre-historic times through Confederation and up to 1967. Unusual lighting and sound effects combined with artifacts, historic documents, life-like displays and colourful photography to remind Canadians of their past. During 1967, hundreds of thousands of Canadians visited the train as it rolled across the country.

From the day of the train’s departure from Victoria, B.C., the Centennial Commission had been looking for places to take pictures of the Confederation Train against a scenic background.  However since the train travelled mostly at night, there were limited opportunities for photographs.  As the train approached Sault Ste. Marie, photographers Doug Putman and Gordon MacAulay were successful in taking pictures of the train against scenic backgrounds at both Montreal River and Heyden. 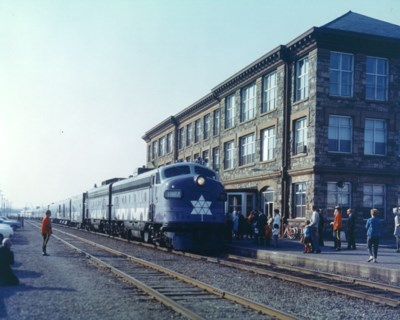 The train rolled into Sault Ste. Marie in late May of 1967 for a four-day stopover. The Algoma Central Railway was the first railway to handle the train with a caboose.  The ACR consented to adjust normal operating procedures so that they could accommodate the display of the train at the Bruce Street station.  News stories about the train’s visit indicate that Sault Ste. Marie was the first stop on the tour where the weatherman cooperated by providing four consecutive days of good weather.  A total of 37,427 citizens of Sault Ste. Marie toured the train during the four days of its visit.

Municipal workers from the Board of Works put up fencing around the display zone and additional lighting was set up to shine on the south side of the train by the PUC. Police were on duty 24 hours a day while the train was on display to deter vandalism.

The visit by the Confederation Train to Sault Ste. Marie in 1967 was certainly an exciting time for all citizens but it was only one of many wonderful events held during the Centennial year and we look forward to the special events planned for Canada 150 in 2017.