Remember This? Have you seen the Ripple Rock?

When people drive along Highway 17 East a comment frequently heard relates to the number of rocks lining the highway.  Did you know that there is a very unique rock formation located just one and a half miles west of Desbarats on the north side of Highway 17 East? 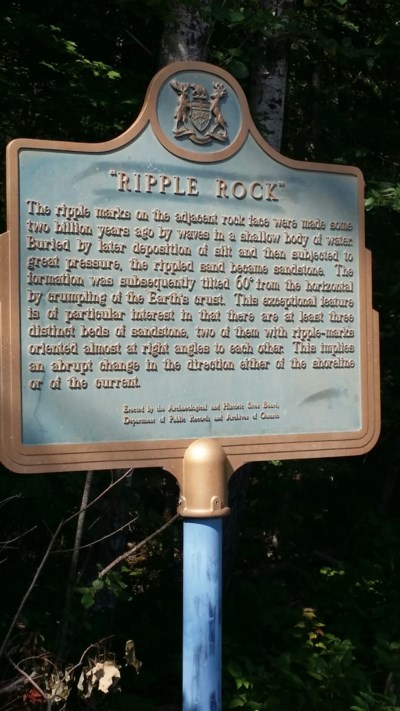 A sign marks the location of Ripple Rock, a unique rock formation that can be found just west of Desbarats along the north side of Highway 17. Sault Ste. Marie Public Library Archive photo

This unique rock cut is called the Ripple Rock.  During the construction of the Trans-Canada Highway along the North Shore in the early 1960’s, this rock cut was uncovered during the blasting of the rock formations.  Fortunately the construction workers at the time recognized that this was unusual and geologists were immediately called in to investigate.

Dr. Peter Giblin, resident geologist at the Ontario Department of Mines at the time of the blasting, explained that the ripple rock is part of the Lorrain Formation of the Proterozoic age and is about 2 billion years old. Dr. Giblin also suggested that at one time there had been a range of mountains along the north shore which had become worn down by erosion. He said the rock contains no fossils because it was formed in the period before animals had hard shells.

According to the website, www.thisoldearth.net  “ripple marks come in two forms, symmetric, or wave formed ripples and are asymmetric, or current ripples. Wave-formed ripples result from the to-and-fro motion of waves and have a symmetrical profile. Current ripple marks form in response to water or wind currents flowing in one direction and have asymmetric profiles. The asymmetric profiles allow geologists to determine paleocurrent directions, in other words, which direction the wind or water was flowing from when the cross beds were deposited. This is possible due to the fact the longer side of the ripple always faces the upstream direction.”

When the highway was widened in 1968 it was feared that the rock formation might be damaged. On the suggestion of Dr. Walter M. Tovell, Curator of Geology for the Royal Ontario Museum, and Associate Professor of Geology at the University of Toronto, the contractor was required to cover nearby rocks to be blasted with rubber mats. As a further precaution, straw was piled in front of the ripple rock to protect it from stray flying rocks.

On August 22, 1970, the Sault Ste. Marie Historical Society unveiled a plaque provided by the Archeological and Historic Sites Board, Department of Public Records and Archives of Ontario. The plaque reads as follows:

The ripple marks on the adjacent rock face were made some two billion years ago by waves in a shallow body of water. Buried by later deposition of silt and then subjected to great pressure, the rippled sand became sandstone. The formation was subsequently tilted 60 degrees from the horizontal by crumpling of the Earth's crust. This exceptional feature is of particular interest in that there are at least three distinct beds of sandstone, two of them with ripple-marks oriented almost at right angles to each other. This implies an abrupt change in the direction either of the shoreline or of the current.

The unveiling ceremony took place just to the west of the rock where the shoulder of the road had been widened to provide parking for spectators’ cars, about 4.2 km east of Highway 548. Perhaps it might be worth taking a drive this summer to check out this important phenomenon available in our own area!