This edition of Remember This chronicles what police called 'the most ghastly and gruesome killing in the history of the north'
Jul 14, 2019 11:00 AM By: Remember This? 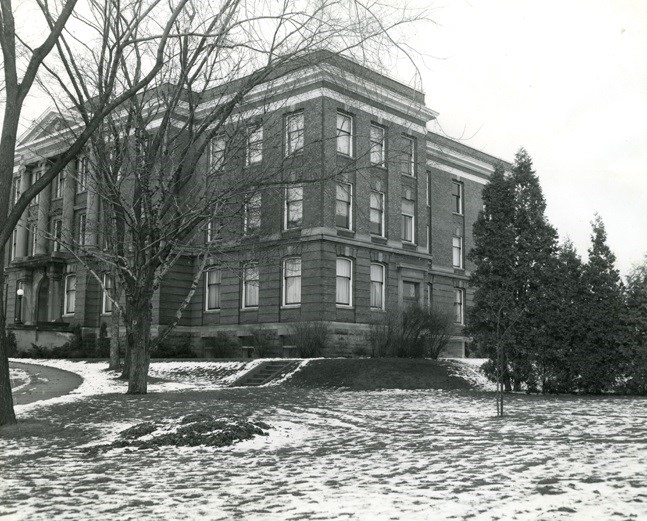 The courthouse is pictured in this Sault Ste. Marie Public Library archive photo

From 1867 onwards, the federal government has records of four people hanged in Sault Ste. Marie.  The first man was executed in 1902. In 1948 alone, two men received the noose, the first of which was Edgar Simons.

In April of 1947, Frederick Rupert, an American army veteran, was running a tourist lodge at Pancake Bay, alternately referred to as Northwoods Lodge, Heron Lodge, and Rupert’s Lodge in subsequent newspaper articles.  He lived on the property in a log cabin with his wife, Catharine, and two-year-old son, Frederick Lee.

On that particular day, he had gone to Sault Ste. Marie to run some errands, spending some extra time searching for candies for his son.

It was only the second time he had left his family alone at the lodge.  The first time, he returned to find his dining room had burned. This time, he returned home to find something much worse, walking in to find a grisly, horrifying sight, something that police would later refer to as “the most ghastly and gruesome killing in the history of the north.”

His son was in the kitchen, having been shot in the head.  His wife, too, was dead, partially undressed, lying at the foot of the bed in a pool of her own blood.  Blood splatter covered the house, and the walls were riddled with bullet holes.

From the bloody trail alone, investigators determined that she had been outside when she was shot, ran inside, tried to get her son, tried to reach the telephone, and then was grabbed by the assailant.  At some point, she may have been sexually assaulted, although it wasn’t clear if this was prior to or after her death. A bullet to the head eventually killed her.

Rupert, accompanied by a carpenter who had returned from Sault Ste. Marie with him, armed himself and searched the rest of the house.  They found one item of note that they turned over to the police, a pad of paper that had been written on. Over the course of the trial, the contents of the note became known: “Dear Fred, I killed your wife and baby.  I don’t know why I did it. It won’t help matters to say I’m sorry so I guess I don’t want to live now. I never lit the dining room though. I don’t know why I did shoot them. I wish I didn’t do it. Do the best you can.  So long for now, I mean goodbye Fred. Be careful.”

It didn’t take long for the murderer to come forward.  While police were at the cabin, investigating, they heard a voice from the bushes.  Edgar Simons, rifle in hand, cold and crying, surrendered and confessed – both verbally and in a note that he left.  The motive was a mystery, though, with Simons repeatedly saying, “I don’t know why I did it.”

Simons, 19 years old, had been employed by Frederick Rupert at the tourist lodge, where he worked as a guide, handyman, and general caretaker.  He had worked under the previous owner, but stayed on after Frederick Rupert had purchased it in 1945.  He apparently felt very positively toward the Rupert family, and they had treated each other as family.  Rupert went so far as to say he had “trusted Simons like a brother,” according to the Globe and Mail, and felt that “his wife and child would be safe from harm as long as Simons was at the resort with a rifle to protect them.”

Rupert was also quoted in the Sault Star as saying, “The last person I would suspect of doing such a thing would be Edgar.”

Indeed, according to Rupert, the only real tension was between Simons and Catharine Rupert - he would not take orders from her, and “things came to such a point that [Rupert] asked Catharine to leave the ordering of the men to [him].”

In addition to the note found in the cabin, Simons provided police with a full confession.  The only aspect he denied was the sexual assault, however he fully acknowledged killing Catharine and Frederick Lee Rupert.

Simons was charged with two counts of murder and stood trial first for the murder of Catharine Rupert.

Check back next week for the story about the trial.