Legend tells of a fur-bearing fish that explodes and may have arisen from cotton mould infected fish
Mar 28, 2021 11:00 AM By: Remember This? 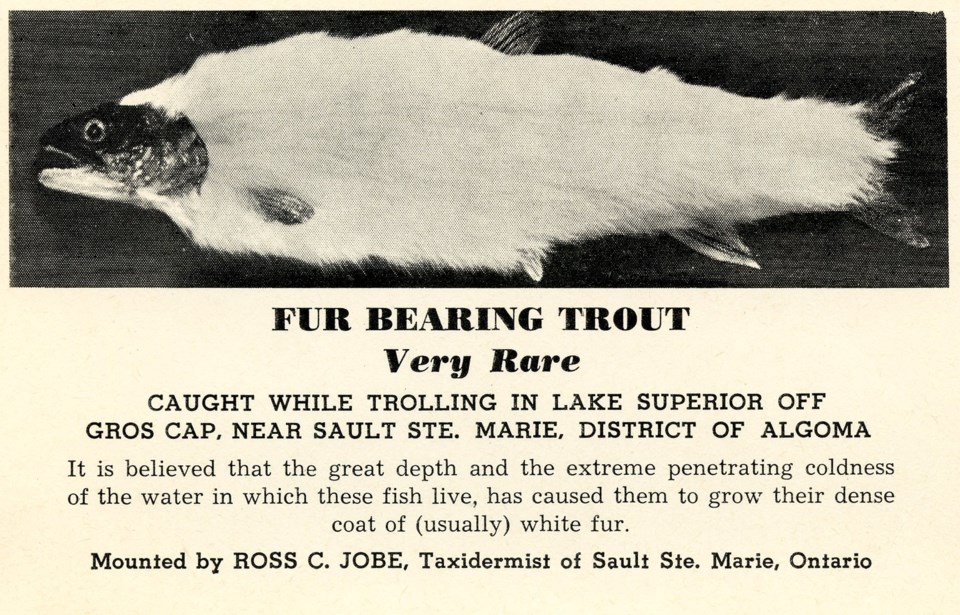 Dwelling in the archives of the cryptozoology collection of the National Museum of Scotland lays a tiny piece of Sault Ste. Marie folklore in the form of a taxidermied fish warmly wrapped in fur.

The inscription beneath the specimen states that it is a “Very Rare Fur-bearing Trout caught while trolling in Lake Superior off Gros Cap near Sault Ste. Marie in the District of Algoma”.

It goes on to add that “it is believed that the great depth and the extreme penetrating coldness of the water in which these fish live have caused them to grow their dense coat of (usually) white fur.”

The trout was mounted by Ross C. Jobe and arrived at the museum by way of donation by a returning tourist believing it to be real. Upon inspection by museum staff, they found the specimen to be a hoax with rabbit fur “ingeniously” attached.

To be fair to the tourist, maybe it is not such a stretch to believe in the existence of the fur-bearing trout considering the other oddities that truly exist in the world; creatures such as the duck-billed platypus, the narwhal, and the pangolin to name a few.

And when the national animal of your country is the unicorn, is a hairy fish really that much of a stretch?

The origin of this furry fraud came about in 1959. According to an article in the Edmonton Journal in September 1988, Jobe spotted a poorly done furry trout on the wall of a local lodge and convinced the owner to let him improve it.

The owner liked his improved version so much she asked him to produce more. The rest is history; as Ross Jobe went on to sell large numbers of the mounted furry trout through shops like the Hudson’s Bay Company.

They have made their way far and wide – residing on the walls of numerous homes and businesses here in the Algoma region, in Ripley’s Believe It Or Not Museums, and countless other locations around the world.

The fame didn’t stop there; the fur-bearing trout also starred in a successful Caramilk chocolate bar campaign. The title of the ad was “Five Fake Mysteries and One Real One” where our local furry hoax was featured front and centre.

The legend of the fur-bearing trout has a long history. It is believed to have started due to a misunderstanding when an immigrant arrived in North America from Scotland and wrote back to his homeland about the plentiful “furried animals and fish” in the New World.

When asked for a specimen of a fur-covered fish, the individual is believed to have fabricated one and mailed it home.

There are other tall tales – the fictional fur-bearing trout has been linked not only to Northern Ontario but also to the Arkansas River and Iceland.

Icelandic mythology tells of the Lodsilungar, a fish invented by demons and giants to punish the evil deeds of the human race. They would fill rivers but be inedible.

The Arkansas River variety is supposedly the result of hair tonic being spilled in the river. Also, there was allegedly an article written in a 1929 issue of Montana wildlife magazine which told a tale that the author had caught a fish in Glacier National Park where the water was so cold that nature had provided the fish with a thick coat of fur to enable their survival.

The story goes on to say that the change of temperature would be so great when the fish was removed from the water that it would explode.

Ross Jobe’s taxidermy trout is also not the only famous furry fish to find its way to a museum.

There is one proudly displayed in a museum in Salida, Colorado.

A hoax was created by William Foshay, the Secretary of the Chamber of Commerce to lure people into visiting the town in the late 1930’s. It’s no surprise that Foshay would create such a hoax, as he was known as a con man who had previously been sentenced to 15 years in prison for orchestrating a “pyramid scheme” using shares of his own corporation’s stock.

The idea for inventing this tall tale regarding fur-covered fish may have originated from the spotting of a fish infected with “cotton mould” or Saprolegnia.

An infected fish will become coated in a cotton-like film which is generally fatal. The mould can continue to grow after death resulting in what may appear to be a “hairy” fish if it were found washed ashore.

The creator of this hometown fish fraud, Ross Jobe, was a retired steelworker who must have possessed a great deal of energy and a good sense of humour.

Not only did he produce the fur-bearing trout (with a little help from his friends who he paid fifty cents for trout heads and tails), he also carved totem poles at the short-lived Fort Wosguhaegun, made jackalopes (a jackrabbit with horns), rhino-bucks (a rhino/deer with a horned nose), and oopiks.

These creations however could not match the allure and success of the trout.

Many locals may also have small carvings that the Jobe household would distribute on Halloween.

When the National Museum of Scotland was contacted, they acknowledged that the fur-bearing trout is not on display, though they believed it had been shown in the past as part of an exhibition of animal fakes and frauds.

It is still available to be viewed by appointment when coronavirus restrictions are lifted, but you may not need to travel all the way to Scotland or to a Ripley’s Believe It Or Not Odditorium – many locals have these novelties on the walls of their camps or stowed away in their attics!

Wheelies: A meeting place for the Sault's youth, where employees took lie-detector tests
May 9, 2021 11:00 AM