This edition of Remember This looks back on a tragic incident that took the lives of four people
Jun 2, 2019 11:00 AM By: Remember This? 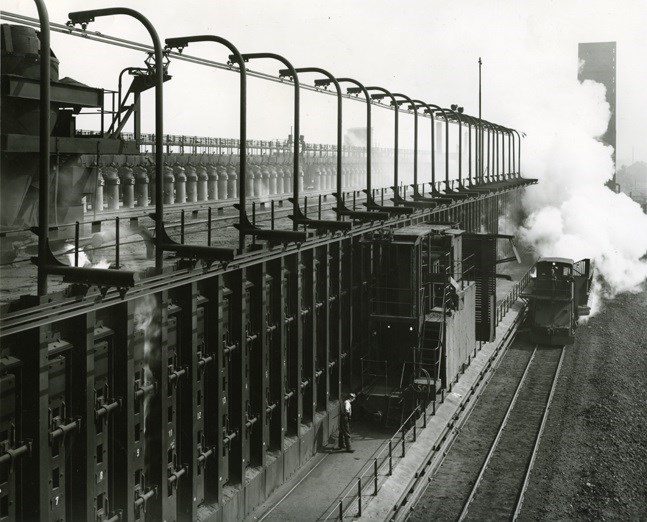 One of the batteries involved in the fatal blast of 1963 at Algoma Steel. Sault Ste. Marie Public Library archive photo

In January of 1963, panic gripped Sault Ste. Marie as an explosion rocked the steel plant.

It was hardly the first time something had exploded at Algoma Steel.

The plant made national headlines in 1928, when an explosion in the No. 3 Blast Furnace left five people injured and one person dead; rubble from the explosion flew as far as a quarter of a mile away.

On Dec. 27, 1946, just after 2 a.m., two explosions were caused by hot slag spilling outside the open hearth onto ice and snow. While there were no injuries, the second and stronger blast shook the city and Sault, Michigan.

On Jan. 23, 1963, a major explosion shook the steel plant, just prior to eight in the morning, less than an hour into the shift. Initial reports coming out of the plant said that one employee was dead and many others were missing. However, rescue crews uncovered more bodies under the rubble, the last of the dead men being found at approximately 1 o'clock that afternoon.

All told, eight employees were injured and four killed: Henry Crawford, Charles Gooderham (who was also the Sault Board of Health chair), Steve Tarasuk, and Charles Wolfe.

While the cause of the explosion wasn’t initially known, it happened between the No. 5 and No. 7 batteries, in the reversing room. Dazed employees described to the Sault Star how the explosion had come on with no warning. One described it as “just a blast of smoke,” with another saying that “there was smoke and dust all around. Everything was pitch black.”

Others talked about not being able to see anything, the noise of the blast, and wanting to get out as soon as possible. One injured employee said he just walked without knowing where.

Debris was scattered approximately 200 yards away, and glass was shattered. Even as far away as Gore Street, a combination of the cold weather and the force of the explosion may have shattered some windows.

Ray Smilie, Olympic boxer turned Bell Telephone Company manager, told of the pressure the accident placed on phone lines. As anxious relatives of Algoma Steel employees phoned the media and the police in search of information, they placed an “unprecedented” strain, leading to many lines going out of order.

The panic wasn’t quelled until 11:30 a.m., more than three hours after the initial blast, when Algoma Steel released a statement. They hadn’t wanted to provide any details until they first notified the victims’ next of kin.

However, as time went on, they released further information. Algoma Steel began an investigation into the cause of the explosion, in conjunction with the Department of Labour and the Department of Energy and Resources. Within a couple of days of the explosion, they announced that it “[appeared] to have been caused by some external factor and not by normal operating methods,” as reported in the Globe and Mail.

Algoma Steel officials also praised employees for their roles in the aftermath of the explosion. The initial rescue team was made up of trained employees “who worked so effectively . . . to assist plant protection personnel in controlling the area and assisting in rescue operations.”

Employees, according to Vice President of Operations Douglas Joyce, “worked in sub-zero weather, and long past their normal hours to make the area safe and bring it back to normal production as rapidly as possible.”