Elmer the Safety Elephant, beauty queens and the Soo-ette club as seen on Queen

Concerns with weather, storage facilities put the Santa Claus parade on hiatus nearly two decades
Dec 27, 2020 11:00 AM By: Remember This? 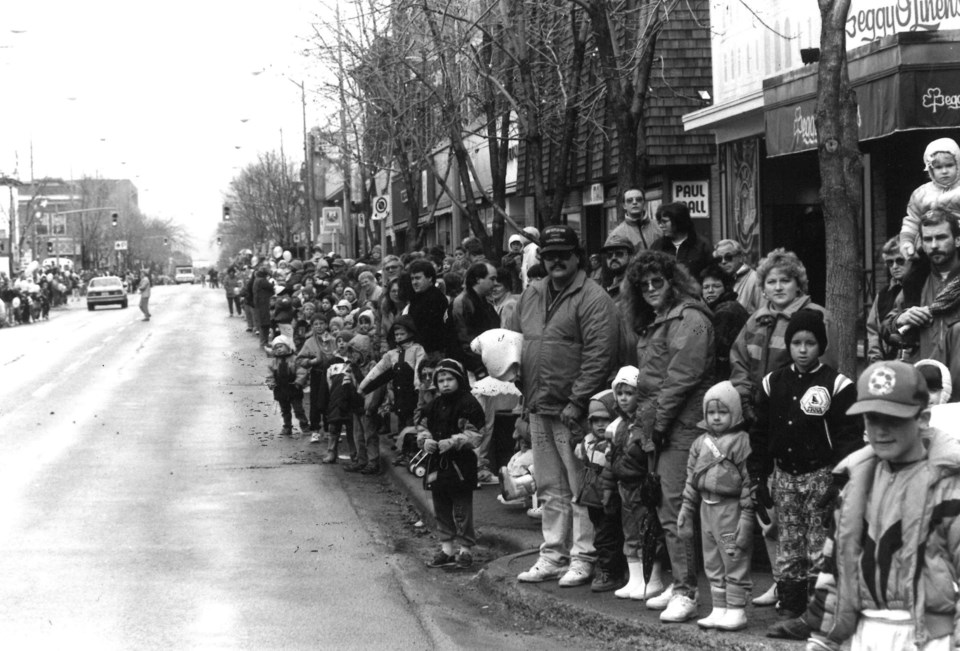 A shot of people waiting for the Santa Claus parade in an unknown year is pictured in this Sault Ste. Marie Public Library archive photo

In 1951, the Junior Chamber of Commerce – or Jaycees – sponsored Sault Ste. Marie’s Santa Claus Parade for the first time. The event quickly became a yearly tradition, a way that Saultites would mark the beginning of the Christmas season.

The parade was packed with floats and community groups. In 1954, for example, the parade had a Mother Goose theme and featured Disney and fairy tale themed floats, along with Elmer the Safety Elephant, the Canadian Legion Band, the Sault Star Christmas Fund, and the Soo-ette Club, just to name a few.

Some years, out-of-town groups even joined, including the Sudbury Mining and Technical School majorettes and band. There were even beauty queens, chosen from local high schools, who “[sat] quietly and [looked] elegant.”

The annual event was highly successful, but the Jaycees worried that it was “getting too big for us to handle” and hoped that they could partner with other groups to help organize the yearly event.

However, the weather was almost always an ongoing concern for the parade. In 1958, the Sault Daily Star commented that “If no one gets pneumonia as a result… then the affair can be termed an unqualified success.”

Some didn’t appear to mind the chilly weather. For others, though, the cold temperature and high winds were a challenge. The newspaper reported that “Some of the young girls… had to be picked up by cars during the progress of the parade because of the cold. Some were crying from fatigue and exposure.” Others made it to the end of the parade “and dropped exhausted, shivering, and some in tears.”

Over the years, there were continual concerns – with the weather and with the lack of storage facilities where the Jaycees could keep their floats and props during the rest of the year. There were even a few close calls when, as late as October, there were fears that the parade would have to be cancelled.

In 1967, the yearly tradition ended. The Jaycees opted instead to host an indoor Christmas village, repurposing parade floats to create elaborate and interactive sets. Inside, the weather was no longer a concern – but the availability of year-round storage remained an ongoing issue.

However, the lack of a parade didn’t stop other organizations from hoping to bring it back. In 1986, after twenty years without a Santa Claus Parade, the Queenstown Association took over. As Udo Rauk, manager of the association said, “Sault Ste. Marie is a parade city,” and, moreover, “This is a show-me city. I think we showed them.”

The parade has remained a staple, involving many community organizations: the Jaycees once again and the Rotary Club, to name a couple. While it may have been cancelled this year for safety concerns, the Rotary Santa Claus Parade has a long and successful history in the city.