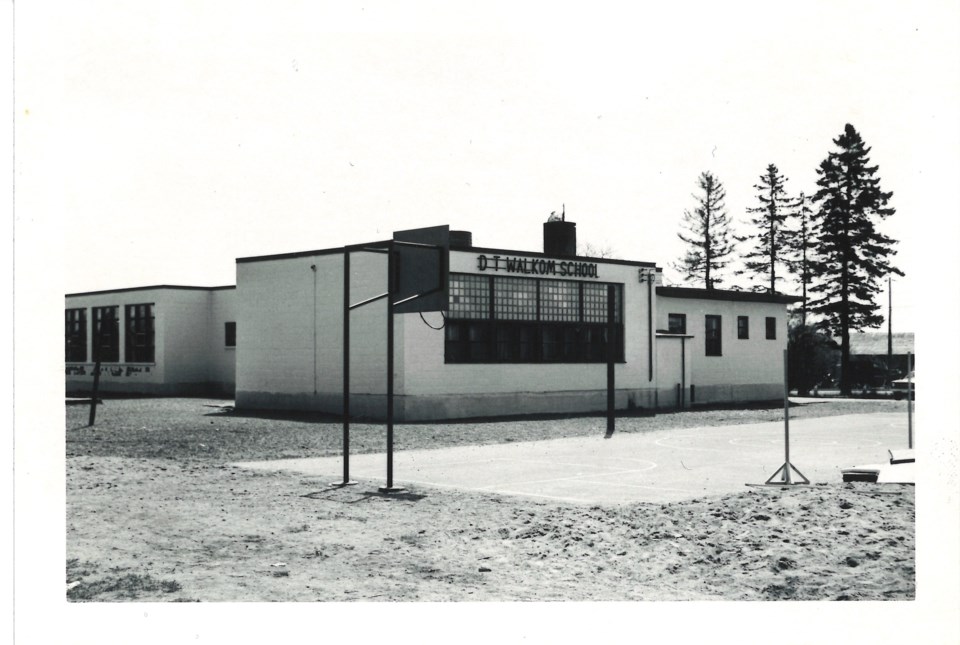 The establishment of Francis H. Clergue’s empire of industries in Sault Ste. Marie during the early 1900’s attracted many new people not only to Sault Ste. Marie but also to the adjacent townships, including Tarentorus Township. From 1899 to 1913 the population of Tarentorus Township grew rapidly as more families moved into the area. Naturally, with all these new families there was an urgent need for additional schools.

At a meeting of the Tarentorus Public School Board in 1913, members J.H. Haining, A.H. Huckson and John Fleming chose the lot at the corner of Great Northern Road and Fourth Line as the new site for another school. The property was purchased at a cost of $200 for 2 acres of land.

Eight years later, on Jan. 16, 1950, a catastrophe struck when a fire, believed to have started in the basement by overheated pipes destroyed the school with damages estimated to be $30,000. The principal, Harold Phillips and teacher Miss Patricia Lamb were credited with calmly evacuating all of the children to safety with no injuries. The school had been built of brick and was well designed making it one of the finest schools in the township but unfortunately it was not able to survive the devastating fire.

In less than a year a new three-room school was constructed on the same site at a cost of $58,000. The new school was considered one of the most modern schools for its size in Ontario. It was built as a one-storey school built in an L-shape of cement blocks and measured 66 feet by 101 feet.

The name chosen for the new school was D.T. Walkom Public School.

Daniel T. Walkom was born in Essa, Ontario in 1880. At the age of 17 he received his first teaching post in Powassan before going on to teach in Kitchener. In 1911, he received his teaching degree from Queen’s University and began teaching science at Stratford. He moved to Sault Ste. Marie within the year and began his position as science master at Sault Collegiate. From 1928 until 1949, Mr. Walkom worked as a school inspector in Sault Ste. Marie and the Algoma District, earning him the designation as one of the longest-serving school inspectors in Northern Ontario. At the dedication of the new school on March 17, 1951, D.T. Walkom commended the residents of Tarentorus Township for the progress they had made in furthering the education of the children in the township.

In the 1921 edition of the Sault Collegiate Institute Argus yearbook, a quote from Daniel Walkom revealed his unique view on the role of an educator, “There are now and have been year after year students in the school whose influence is priceless.” He went on to say, “They are not necessarily the most brilliant but it is they who will do most to make the world a happier place in which to live.” With this quote, he seemed to recognize that a full education goes beyond the academic studies. Daniel T. Walkom died in a boating accident near St. Joseph Island on Aug. 8, 1955.