Did Vikings roam the Great Lakes? Some once thought so

This edition of Remember This looks back at the discovery of relics and a local newspaper owner's efforts to determine their validity
0
Jan 5, 2020 11:12 AM By: Remember This? 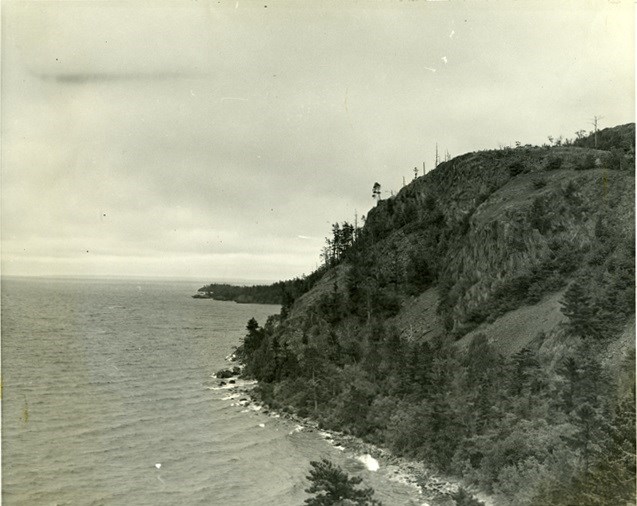 Gros Cap was used to film the television show Vikings, but did real Viking relics show up on the shores of Lake Superior?

In 2015, the popular television show Vikings spent some time filming around Gros Cap. But that was hardly the first time people thought about Vikings in relation to Northern Ontario.

In the early 1930s, James Dodd, a prospector and railway conductor from Port Arthur, Ontario, apparently unearthed Viking weapons.  He said he was working on a mining claim near Beardmore, northeast of Nipigon, when he hit upon rusty, iron relics – a sword, an axe head, and a talisman.  He brought them home for safekeeping and, a few years later, sold them to the Royal Ontario Museum in Toronto for a whopping $500.

So, how does this relate to Sault Ste. Marie?

None other than James Curran, editor of the Sault Star, became fascinated with the case.  He wound his way through a maze of information, trying to make sense of conflicting accounts, stories, legends, and supposed archeological evidence – including what was believed to be a Norse spear found at Gros Cap.

He tracked down people for interviews, refuted arguments that the relics were not legitimate, and wrote widely on what this could mean for the history of Canada.  It was no easy task: in the Globe and Mail in 1938, one writer praised Curran’s tenacity, reflecting that he didn’t know of an investigator who “had to track his quarry . . . through a greater mass of contradicting facts.”

The results of Curran’s efforts were a series of Sault Star articles as well as a book titled Here was Vinland: The Great Lakes Region of America.

Vinland referred to a settlement established by the Vikings, outside of their settlement in Greenland.  Questions abounded about where exactly Vinland was located. Curran thought that it might have been the Great Lakes region, and that Vikings may have travelled to the area through James Bay.  For a time, he was considered to be the chief proponent of that idea.

He vehemently argued that the Beardmore relics were genuine, and that they proved a Norse presence in Northern Ontario.  In a luncheon talk given at the Empire Club in Toronto, Curran urged everyone to get involved in the search for Viking relics in the area: “We should get everybody in our communities to be relic conscious and look in places where they should be found, such as lake shores and river shores, attractive camping grounds, any place you would camp yourself,” he told the crowd, certain that more Viking artefacts would be uncovered.

So, was James Curran correct in his arguments about the relics?  Well, yes and no.

The Beardmore relics are now widely considered to be genuine Norse artefacts from approximately 1,000-1,100 A.D.  However, a Viking warrior almost certainly did not bring them to Northern Ontario.

Rather, it seems that the relics would have been found elsewhere and planted at the Beardmore claim.  The most damning evidence came in 1956, when James Dodd’s adopted son Walter came forward with his memories of the ‘discovery’ of the items.  While he originally had stood by his father’s account of how he came across the relics, he later recanted, saying that his initial statements were made out of fear.  In a sworn affidavit, Walter claimed that his father had found the relics in their basement in Port Arthur, eventually took them out to Beardmore, and “laid them on the ground at a spot where he had been blasting some time before.”

Several months later, James Dodd went back to his claim and returned with the relics, as if he had uncovered them there.

Also corroborating this explanation was a contractor from Port Arthur named J.M. Hanson.  Hanson claimed that a Norwegian named John Bloch had given him the relics as security on a $25 loan.  The relics were left in the basement of a Port Arthur house – the same house that James Dodd eventually rented.  However, Hanson expressed mixed opinions on whether the relics from Bloch appeared to be the same as the ones in the Royal Ontario Museum.

While the relics were genuine, they hardly proved the presence of Vikings in Northern Ontario – and they certainly didn’t paint the picture of Vinland that James Curran was so passionate about.

In other words, Saultites aren’t likely to find Viking relics in their backyards . . . unless, of course, they live in Gros Cap and stumble across a prop left behind from a television filming set.

Local journalist fights government censorship . . . in 1916
Feb 9, 2020 11:00 AM
Comments
We welcome your feedback and encourage you to share your thoughts on this story. We ask that you be respectful of others and their points of view, refrain from personal attacks and stay on topic. To learn about our commenting policies and how we moderate, please read our Community Guidelines.