A shipwreck, a young woman and a message in a bottle 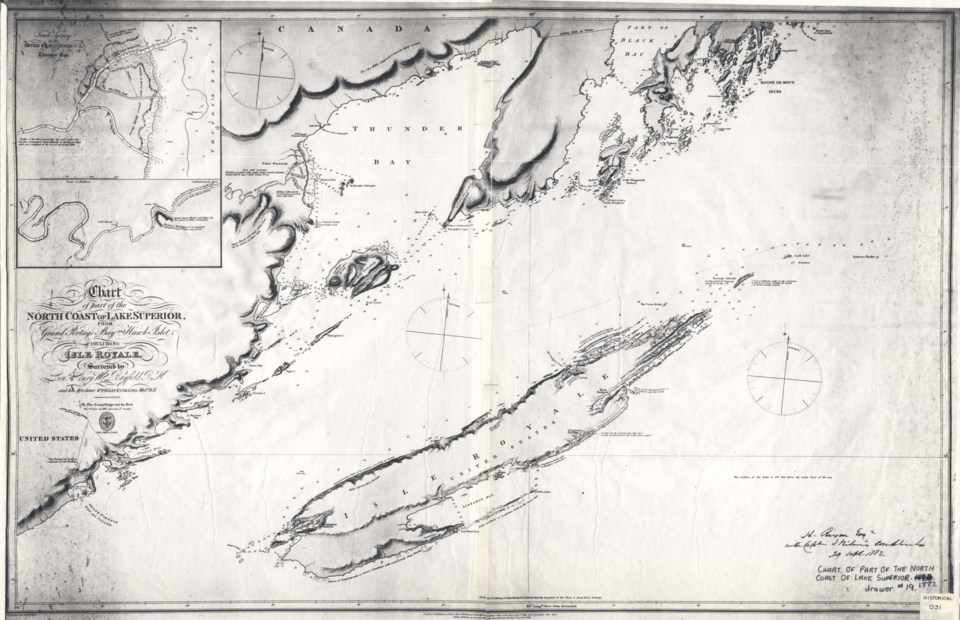 In December of 1928, a trapper working north of Sault Ste. Marie found a message in a bottle at the mouth of the Agawa River. The note told of the perils of the last surviving crewmember of a freighter, wrecked in a severe storm in December of 1927.

The Sault Star had already described the “raging blizzard” that saw the loss of several boats – including the Kamloops, a Canada Steamship Lines freighter carrying a load of barbed wire. The Kamloops and another ship, the Quedoc, were out on Lake Superior near Isle Royale, headed in the same direction. Crews on the Quedoc saw a large mass directly ahead of them, took a sharp turn, and tried to alert the Kamloops of the danger. However, the visibility was poor, thanks to the high winds and a frost fog. The Kamloops went out of sight, and the Star reported that it had likely “foundered on the rocks at some isolated point.”

With no wireless aboard the ship, it was impossible for rescuers to try to contact anyone on the Kamloops. Rescue crews had to rely on “an intensive search,” which was hampered by the wintery weather; the winter storm also sparked fears for the health of any survivors of the wreck.

As winter closed in, rescuers suspended the search, and all 22 people aboard the Kamloops were feared to have sunk along with it – a fear that increased as the bodies of some crew members were recovered, including a J. Journeault from Sault Ste. Marie. Any survivors likely would have wound up on Isle Royale, a place the Globe described as “a forbidding jungle in the winter.”

In May of 1928, the warmer weather meant that the search could resume. This time, the focus was on finding the freighter itself and any additional bodies. Operations even involved Ontario government planes, flying out from Sault Ste. Marie to Sioux Lookout, searching Lake Superior for any visible sign of the Kamloops along the way.

And then, in 1928, a trapper from Sault Ste. Marie, Louis Coutu, found the message in a bottle at the Agawa River – over 150 miles away from where the Kamloops was believed to have sunk. Louis Coutu was the brother of Bill Coutu, an NHL hockey player who infamously attacked a referee in 1927 and was briefly banned for life from the league.

Louis Coutu was trapping in the Agawa River area when he is said to have found a pickle or whiskey bottle with some paper inside. He brought his find back to Sault Ste. Marie, where a media frenzy ensued. Coutu had initially planned to provide the contents of the note to the Sault Star – something that the writer of the note had apparently requested. However, that’s not quite how it played out.

Instead, Coutu was quoted in a Sault Star article, saying that “[he had] to pay for all [he got] in the Soo, and if the people of the Soo want to know what is in the note, they can pay for it. They’ve never done anything for me and [he was] going to do the same.”

He offered what he called a “simple money proposition,” saying he would provide the note to the highest bidder.

This reaction prompted some speculation about the authenticity of the note, with some Saultites feeling that “[a]ny man with a heart would not refuse to give the message of a dying man to the world if he asked that it be published.”

They suspected that Coutu had faked the message.

However, in talking with the Star, Coutu also indicated that he may have wanted to contact the family of the letter writer before releasing its contents to the public, hence the delay in sharing information about it.

Coutu did provide a few details about the note. He told the Star that the author had signed it “Al, who is dead,” that the ship had sunk near Isle Royale as suspected, and that Al was the last surviving member of the Kamloops crew and did not expect to survive much longer.

As for Al, people initially assumed he was a crewman aboard the Kamloops. In fact, her name was Alice Bettridge from Southampton Ontario, a woman in her early twenties who worked as the assistant stewardess on the ship. Despite concerns that the letter may have been a hoax, her parents confirmed that the handwriting was a match.

In her letter, she described the wreck of the ship, and how she had made it to shore by herself. She chillingly wrote, “I am the last one left alive, freezing and starving to death on Isle Royale. I just want mom and dad to know my fate.”

Alice’s body had already been recovered in June of 1928, months before her letter was found. Her remains were identified by the papers found on her body and by her teeth – the only other woman aboard the Kamloops had false teeth.

In 1977, divers found the wreck of the Kamloops. As expected, she had gone down close to Isle Royale, near an area now known as Kamloops Point. The ship is virtually undisturbed under the water, a memory of the horrors of a storm more than ninety years ago.