Sault musician performs online with 'Back to the Future' actor

Sault punk legend Mikey Hawdon recently teamed up with Harry Waters Jr. of 'Back to the Future' fame for a special rendition of a classic song
May 14, 2020 1:58 PM By: Chris Belsito 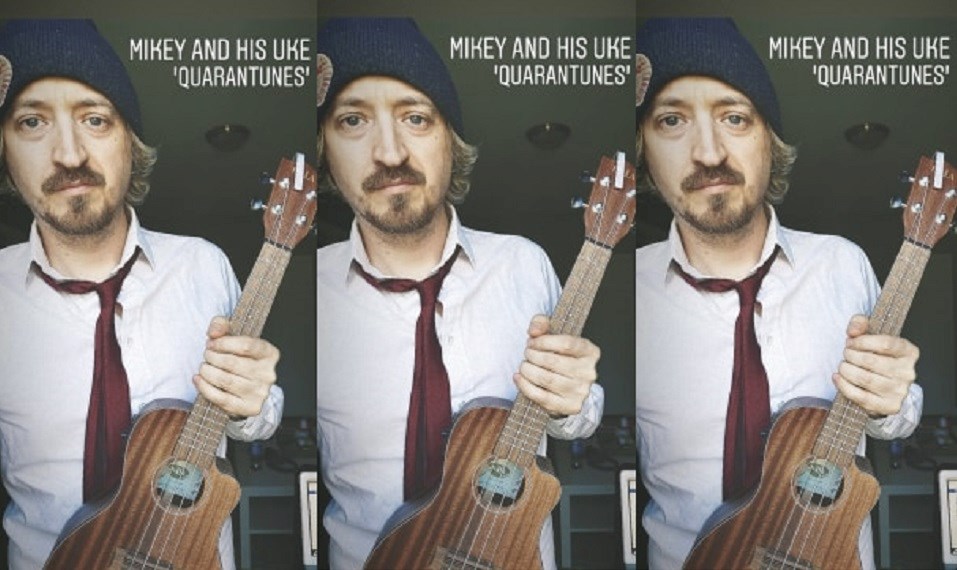 There are almost 60 'Mikey and his Uke' videos with no sign of stopping any time soon.

Sault-born musician Mikey Hawdon (Inner City Surfers, The Fairmounts, Lion Ride) has been a busy man during this pandemic. Currently living in Toronto, Hawdon is a both a working musician and works in the Linen Department at Mount Sinai Hospital.

“Before COVID-19, when I wasn’t at work, I was busy playing, practicing and creating music with my various bands. After lockdown, all of that ended, and my work at the hospital became much busier.”

For someone with a punk pedigree, his choice of musical instrument for the videos was unusual: a ukulele.

“I bought the ukulele in 2017, a few months before going to Hawaii. I wanted to learn how to play so I could record a couple of songs while I was there. After the trip, I put the ukulele away and kind of forgot about it.”

“When this all started, I hadn't played my ukulele in over year. I had gone to the pantry to look for toilet paper during the big 'Toilet Paper Scare' of 2020. I didn't find any toilet paper, but I saw my ukulele buried under some boxes so I decided to pull it out,” laughs Hawdon. “I figured it was as good a time as any to brush the dust off the ol' uke.”

His first pandemic video was a modestly filmed version of a song called Infected by the group Bad Religion.

“I was fooling around with [the ukulele] late at night, and just took a quick clip of me playing it. It seemed appropriate. The next day when I woke up, people seemed to really get a kick out of it, so I decided to do another. Then it just became a daily occurrence.”

As he continued to make the videos, their quality and complexity increased. Hawdon quickly realized he needed a bit more help if he was going to keep producing them.

“It started off with just me in my bedroom, playing little snippets of songs and posting them online. Not too far in, my friend and bandmate Dean Glover came on board and added himself playing drums next to me. Then we started asking other people to join us. Dean does all the editing and his skills allowed me to collaborate online with other musicians, including himself. I mainly come up with the ideas, recruit the players, and then send everything to Dean. He makes us all look and sound great. For a couple of the tunes we've done, my good friend Chuck Dailey [The Salads, I Mother Earth, The Conspirators] has done mixing and editing as well. He's been great to work with too.”

Initially, Hawdon was taking song requests from friends in order to decide what songs to cover, including diverse songs by artists like Paula Abdul, Prince, Nine Inch Nails and Men Without Hats.

“I did my best to accommodate as many of them as possible. Now, I try to do songs that seem relevant lyrically, songs I've always loved, or just songs I think would sound cool with a bunch of different players.”

Initially, a lot of the musicians Hawdon approached to join him in the videos were friends or people he had met over the years.

“Now, I’m working with [some musicians] for the first time, either because I’ve reached out to them or they’ve reached out to me. As a musician, that really is the silver lining in all of this. I've gotten to play with people in combinations that couldn’t have happened except online, and that’s not something many of us would have considered before the pandemic. Like everyone, I wish we weren’t in this terrible situation, but doing the videos has been a positive distraction.”

Recently, Hawdon took a chance and invited a special guest to join him that he didn’t expect to come on-board.

Hawdon reached out to Harry Waters Jr., an American actor and singer, best known for his portrayal of Marvin Berry in Back to the Future.

“It was a total shot in the dark. Last summer when I was in Los Angeles, I met someone who works with Harry sometimes and he encouraged me to reach out to him about these videos.”

“I was surprised at first. Maybe not surprised, but I was very excited. He gave me his phone number so I could call and walk him through the process, and that was it. He's a very sweet man, and it was a huge thrill for me to do this with him.”

For Hawdon, Back to the Future was his favourite movie while growing up.

The song they chose to perform was one of the songs Waters performed in the film, Earth Angel, which earned the actor a gold record.

“The reaction has been great for that one. Back to the Future is such a well-loved movie, and the scene with Harry Waters Jr. singing Earth Angel is so iconic. People get a real kick out of seeing him do that same song, 35 years later, and still so beautifully.”

With the end of the pandemic not currently in sight, Hawdon isn’t sure how long he will continue making the videos.

“It's been so much fun. It's very time consuming, but it's been an amazing distraction from the reality of the world right now,” he says. “I'd love if the videos ended tomorrow because the pandemic was over. But unfortunately, that's not going to be the case. I miss being on stage and in rehearsal rooms with my friends. In the meantime, these videos are giving me something positive to focus on, so I'll keep doing them as long as people are still enjoying them. I want to thank everyone for checking them out. We're all in this together. Stay positive, stay educated, and stay safe.”

To see all of the Mikey and his Uke videos, visit Hawdon's YouTube channel.