Local singer songwriter wrote, recorded and created a video for a song about social distancing
Jun 15, 2020 11:00 AM By: Chris Belsito 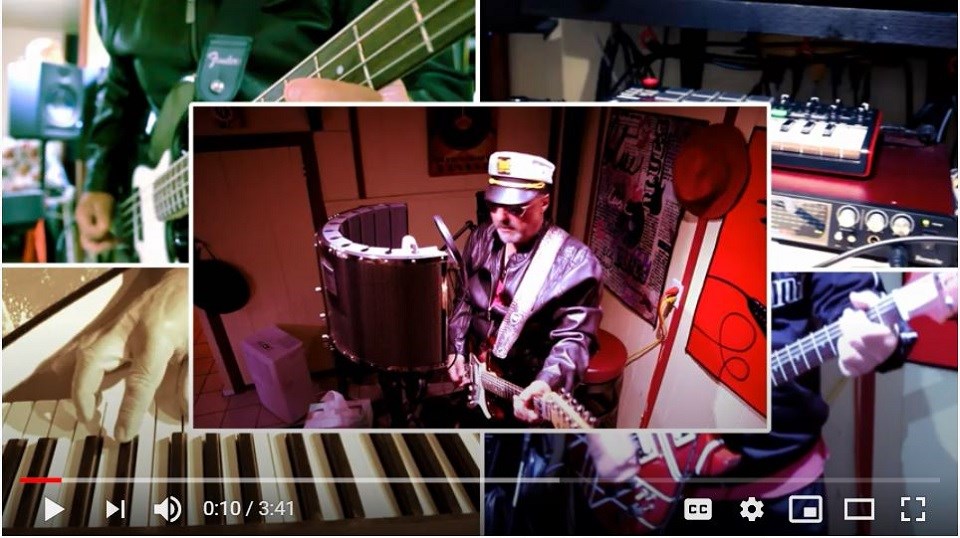 A screenshot from the video for Vince Boschi's social distancing song, Far Away From You.

Two weeks ago, local singer/songwriter Vince Boschi wrote a new tune called Far Away From You, about the emotional side of social distancing.

“There's so much to say about living through a pandemic,” says Boschi. “In my opinion, the one thing that is common, and will make us or break us, is the distance we keep from each other.”

Boschi knows that social distancing works and is the right thing to do as we await a better solution for managing the virus, but he doesn't believe it's something we as humans are innately good at.

“It's human nature to connect physically, visually, emotionally and spiritually with each other. So I simply wrote a song about a commonality that we are all experiencing around the world.”

Although Boschi doesn’t find the practice of social distancing to be hard, he does find it to be awkward and outside his normal behaviour.

“My family and friends are never short of many hugs and kisses when we get together. All of this has taken a back seat…no, placed in the trunk [during the pandemic],” he laughs.

“Social media has helped tremendously in staying connected, [but] we have family members who are not connected to social media. A drive-by and phone conversations [are what has] kept the connection [to those family members] alive.”

“This certainly minimizes the risk of virus exposure within the immediate family bubble.”

Boschi knows the challenges his family faced are not unique and many others are facing the same situation, which is why he wrote the song.

“I'm very proud of our city and how we are handling this pandemic. Frontline staff, supporters and seniors continue to be the people that face the brunt of this virus [especially] in the highly impacted parts of the world,” says Boschi. “We must protect, propel them and help them win this war so we can get back to normal with the very least number of casualties.”

In order to give recognition to all the people who are helping fight the virus and provide some inspiration for those impacted by COVID, Boschi put together a video for his new song, which features some local footage of the local hospital and people out supporting frontlines workers.

Boschi, who is has a passion and talent for photography, put together the video himself hoping to “provide good entertainment value for the viewer.”

As he played all the instruments in recording the song, the video features him performing each of those instruments. To give the video a more theatrical edge, Boschi made a number of personal outfit changes throughout the video.

“Costume changes were a simple and low budget way of portraying me in a few of the many ways I felt as a musician/performer for this song,” he says.

“I also thought it was very important to keep the viewer’s interest from beginning to end and a theatrical change-up sometimes works. How we view ourselves and how everyone else views us are two perspectives that I considered.”

One of the early commenters on the video refers to Boschi as “Captain” alluding to the unique hat featured in the video.

“That comment comes from a good friend and coworker,” he laughs, explaining how he acquired the hat. “We went for motorcycle ride to Petoskey to visit friends a couple of years back and somehow I forgot my hat back home. It was a very sunny day and the sun was beating on my head as we walked around. Stopped at the first gift shop we saw and the captain’s hat was the only hat they had. So I bought it and wore it all day…I keep that hat on my studio speakers in front of me, basically reminding me that I'm the captain of my musical ship and navigate my creativity to anywhere I feel.”

Despite the serious nature of the pandemic, it is clear the Boschi was out to have fun in creating the video.

“This may sound cliché, but I'll stop doing [things like the video] when it's not fun anymore. A lot of work goes into getting that idea and vision that sparked in the brain to a final product. But, never ever boring...always very fun, exciting and rewarding.”

Like many aspiring musicians, Boschi played in bands when he was younger. So will audiences see the return of Vince Boschi to the stage once the pandemic is over? Not likely.

“Musically, I grew a lot over the past few years and continue growing with it. Musician friends have contacted me on several occasions and asked if I would be interested in playing in bands. Although very tempting, I wanted to stay focused on my current interests; the first two phases of song creation.”

“I've experienced performance, even if it was at the local level,” he says. “Now I'm really interested in the songwriting and production phase. It's been said in the music business that at first you imitate and then you innovate. I feel I'm now at the innovative part and [I’m] comfortable expressing myself through the songs I write and produce.”

He hopes that his latest creation provides some inspiration for those managing the pandemic. Personally, he is going to keep creating music and finding personal inspiration.

“Me, my instruments and my music studio are close and tight ... no virus will keep us apart,” says Boschi. “Inspiration and creativity visit at different times and stay in varying durations. It's important to let them in right away when they're knocking on your door … all this truly becomes an expression of who you really are. Not sure if you can even escape it, even if you wanted to or tried.”

The video for Vince Boschi’s Far Away From You can be viewed here.

Mining the Sault’s rich musical history (6 photos)
Jun 29, 2020 10:00 AM
Comments
We welcome your feedback and encourage you to share your thoughts. We ask that you be respectful of others and their points of view, refrain from personal attacks and stay on topic. To learn about our commenting policies and how we moderate, please read our Community Guidelines.