In a statement sent early Monday afternoon, Guelph MPP Mike Schreiner called May a personal friend, mentor and hero to him
0
Nov 4, 2019 2:24 PM By: Kenneth Armstrong 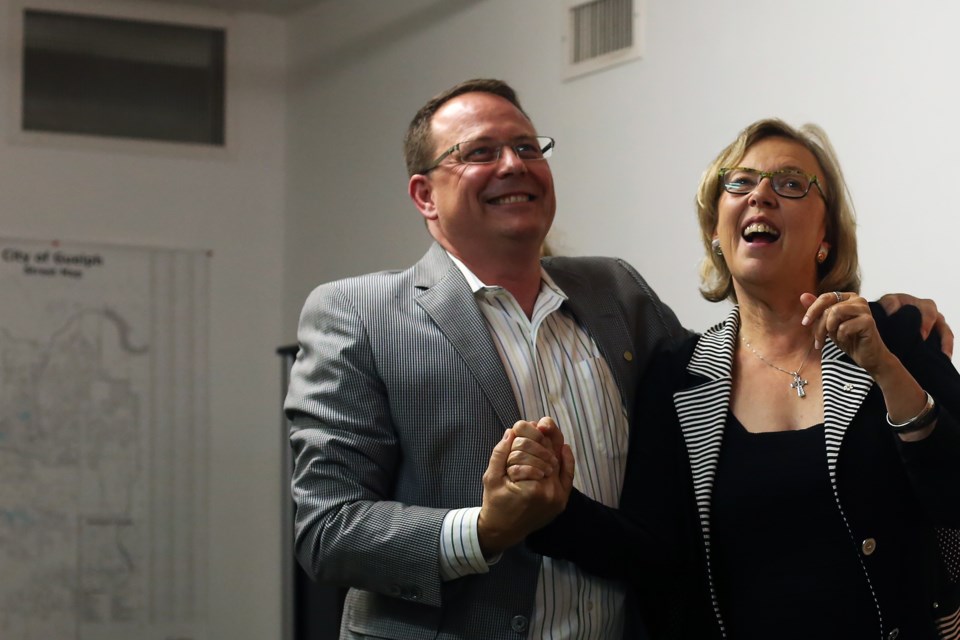 Mike Schreiner, leader of the Green Party of Ontario, embraces Green Party of Canada leader Elizabeth May at the opening of Schreiner's campaign office during the 2018 provincial election. Kenneth Armstrong/GuelphToday file photo

GUELPH - With the future leadership of the Green Party of Canada now open, Guelph’s member of provincial parliament says he is not interested in applying for the job.

Mike Schreiner, the Green Party of Ontario leader and Guelph’s MPP, said Monday he is not interested in seeking the federal Green Party leadership after an announcement earlier in the day that Elizabeth May was stepping down from that post.

“I love being the MPP for Guelph, I love being the leader of the Green Party of Ontario and I am really excited about leading the party into the next provincial election in 2022,” said Schreiner by phone Monday.

Schreiner said he appreciates the number of visits May has made to Guelph over the last decade.

“Knocking on doors with her in Guelph and in other communities — people just light up when they see Elizabeth May. There is something about who she is and what she represents that people are inspired by,” said Schreiner. “I deeply appreciate how much attention and focus she has placed on Guelph.”

In a statement sent early Monday afternoon, Schreiner called May a personal friend, mentor and hero to him.

“Elizabeth’s legacy is indisputable, and for the last decade she has been the heart and soul of the Green movement in Canada,” said Schreiner. “I respect her decision, her desire to spend more time with family and the importance of moving the party forward with new voices.”

Elizabeth May took on leadership of the Green Party of Canada in 2006 and has held that post in the 13 years since. In 2011, May became the first elected Green member in Canada.

Schreiner said she has been the ‘heart and soul’ of the Green movement in Canada.

“As the first elected Green in Canada, she ignited a movement that now counts 18 Greens in legislatures in Ottawa, BC, PEI, New Brunswick and Ontario,” he said.

Deputy party leader Jo-Ann Roberts will stand as interim leader until a successor is selected. Roberts did not win her riding in the recent federal election and is not currently an MP.

By phone, Schreiner said he is looking forward to seeing who the next leader of the federal Greens will be.

“I will certainly work with the next leader in the way I have had a close, working relationship with Elizabeth,” he said.

BEYOND LOCAL: Lying on your dating profile can hurt you and your chances at love
Jan 18, 2020 8:55 PM
Comments
We welcome your feedback and encourage you to share your thoughts on this story. We ask that you be respectful of others and their points of view, refrain from personal attacks and stay on topic. To learn about our commenting policies and how we moderate, please read our Community Guidelines.