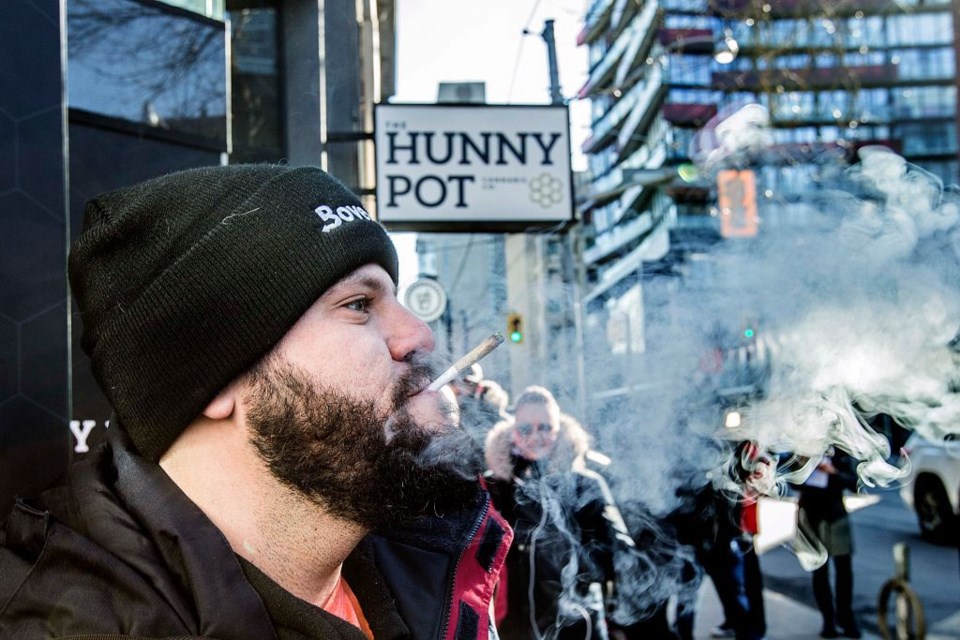 Weed Me’s growing facility in Pickering, Ont., is so crammed with cannabis plants that a row of pots have to be cranked out of the way before people can walk between them.

The growing rooms are perfectly clean and brilliantly lit, and of course, the building is filled with the overwhelming smell of weed.

Are there people in Pickering, east of Toronto, who might want to buy legal cannabis grown in their community by their neighbours? Well, so far, Weed Me hasn’t had the chance to find out.

As things stand, if recreational consumers in Pickering want to consume weed grown at the Weed Me facility in their city, they’ll have to get on a plane, fly to British Columbia or Saskatchewan and buy it there.

“Often, my friends ask how they can get my product,” Weed Me founder Terry Kulaga explains. “At the moment, they have to get a script from a doctor and sign up as a patient, and then we can sell directly to them. Otherwise, we sell our product quite literally all the way on the other side of the nation.”

The first year or so of legal cannabis in Canada has been a bumpy ride. There is a growing legal industry where there wasn’t one before, but there have also been collapsing share values and mass layoffs.  People involved in Canada’s cannabis industry say some of the issues just come with the territory of companies pressured to get too big too fast and the fact that legal weed still costs a lot more than the competing grey-market product.

But over and over again, members of the cannabis industry say their main problem is a painful lack of retail stores in high-population provinces like Quebec and Ontario.

Pickering, for example, not only doesn’t have a store but has no prospect of one in the near future, and Weed Me isn’t allowed to sell directly from its facility.

“The access to the consumer is really limited in Ontario,” Kulaga says. “All I can say is I hope that they ramp up their efforts to create brick-and-mortar stores. We’re definitely ready to service the market locally. Right now, we do sell nationwide, and it would be nice to be able to sell in our own backyard, so to speak.”

No province has dealt with legalization quite the same way, and that extends to the number of retail stores. While the number varies dramatically — arguably New Brunswick has too many — some big provinces still have far too few, which has an outsized effect on the nation’s cannabis economy.

“You have to make it easy for people to get the actual product,” says David Soberman, a professor of marketing at the University of Toronto.

“At the risk of oversimplifying, the inability of the Ontario government to license retail stores right off the bat has resulted in half of the expected market in Canada simply not existing,” he charged.

Why would a lack of stores matter all that much? Most provinces, on the first day of legalization, opened online cannabis sales sites where it isn’t all that much harder to buy legal weed than it would be to buy a book or a pair of socks online.

But one of the surprises of legalization is that it’s really hard to get Canadians to buy cannabis online. In New Brunswick, where every town of any size has had a cannabis store for over a year, just over one per cent of cannabis sales are online.

For better or worse, it seems Canadians want to see and smell cannabis before buying it, and talk to the people who are selling it.

And there’s a lingering uneasiness about the unavoidable data trail that an online purchase leaves. In December, the federal privacy commissioner urged cannabis buyers to use cash if at all possible.

“Some countries may deny entry to individuals if they know they have purchased cannabis, even lawfully,” the statement cautioned.

Alberta’s 301 stores give it Canada’s lowest ratio of people to stores, at one to 14,000, and Ontario has by far the highest, at one to 590,000. (If Ontario had opened cannabis stores at the same rate as Alberta, there would now be about 1,000, roughly three for every two full-service liquor stores.)

Cannabis companies can’t have impressed those who bought their stock in the leadup to legalization:

“I think one of the things that’s pretty certain across the board for the legal cannabis industry is the results have not been as strong as people thought they would be,” Soberman says. “And this is also reflected in the price of many of the cannabis stocks.”

Part of the problem is just inevitable growing pains of a new industry (or a new industry in its legal form) pressed to get vast quantities of flower out of the greenhouse, dried, cured, packaged and on to a truck as fast as possible.

“There’s definitely been some growing too big too fast, perhaps,” Kulaga reflects. “I think that you need to perfect your operations on a smaller scale and then scale. Starting super big is difficult to do. And there’s no real previous model to follow in this industry, so when you’re writing the book as you go, you’ve got to do it conservatively.”

Soberman and Kulaga call for a carrot-and-stick approach to the illegal market (which can be called the black market, grey market or legacy market, depending on your politics.)

First, at least some legal weed needs to be priced more competitively, despite a dollar a gram in excise taxes.

“We know legal pot is priced at approximately 10 dollars per gram, but the price in the black market for [a] similar quantity of cannabis is about six dollars — five, six dollars,” Soberman says. “So one of the real issues for people, especially people that have been using pot for a while, is what’s the motivation for them to switch? First of all, they can’t find it. And second of all, they have to pay a lot more for it.”

Kulaga would like to see more police effort put in to curbing the illegal market.

“The enforcement has to actually go out and shut down some of these illegal operations,” he says.

It’s a question that divides the legal cannabis community, which includes many people who were in one way or another involved with it under prohibition.

Last week, the Cannabis Council of Canada, an industry group, published a statement urging governments to “… prioritize the closure and removal of both illegal brick-and-mortar stores and actively seek out and shut down illegal online cannabis dispensaries.”

Aurora, a member of the council, issued a statement that said the company “… recognize(d) the importance and value of the cannabis movement and the people who advocated for better drug policy that led to legalization” and that the letter “did not represent the intended message.”

On the other hand, it’s challenging to run a business in a highly taxed, highly regulated industry against competitors selling a similar product who are neither taxed nor regulated.

For example, California’s legal cannabis industry has had a disappointing launch in part because the state has both high cannabis taxes and also a well-entrenched, tolerated network of grey-market stores.

Kulaga says some grey-market stores operate so openly that customers aren’t aware they’re buying from an illegal source — and, in principle, breaking the law themselves.

“People approach me on a regular basis saying, ‘Oh, I got some product,’ and they … more often than not obtained it from an illegal source and they don’t even realize that that’s the case. So that needs to change.”

About a month after legalization, 18 per cent of cannabis buyers in Ontario told pollsters they had bought from government-run stores and another 12 per cent from licensed, privately run stores. Neither category existed at the time, which leaves us to conclude they thought that stores operating so openly must be legal.

Between high taxes and competition from the illegal market, it’s possible that legal cannabis may never be a very profitable industry, Soberman cautions.

On one hand, he predicts more retail stores will open over time, which will lead to more people buying from the legal market.

“The second thing is I think you’re going to see a drop in prices because the prices in the black market and the cost of making your own cannabis isn’t going to change,” he says. “And so, if the legal producers of pot really want to grow their business, they’re probably going to have to be a little bit more competitive with their pricing.

“But all of that says that the market’s not going to be nearly as profitable as people thought it was. Not only that, there are multiple firms competing for business in the legal pot market, and they’re all trying to beat each other. So these are the reasons why I’ve said I’m not sure I see a very bright light at the end of the tunnel.”