BEYOND LOCAL: Parked school buses go up in flames near Sudbury 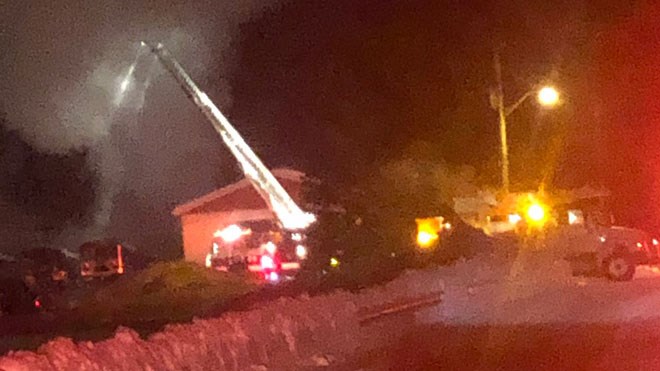 C&D Bus Lines owner Claude Montpellier said he was awoken late Monday night by a truck driver who passed his school bus yard on Montpellier Road in Chelmsford, and noticed a fire in front of one of the buses.

Montpellier rushed to the bus yard, and was able to move two buses out of a shelter that held seven vehicles before the fire became too intense.

In the end, five buses were destroyed in the blaze, along with the bus shelter.

“The other five just went up in flame in no time,” he said. “Ah, it went so fast. I was shocked to see how fast it went.”

Montpellier said he's grateful firefighters were able to save his garage, which is attached to the bus shelter.

Greater Sudbury Fire Services said in a press release that firefighters were called out to the blaze at 11:46 p.m. March 4. Damage is estimated at $800,000. Fortunately, nobody was injured in the fire.

The cause of the fire is under investigation. Platoon Chief Chris Stoakes said the cause is currently undetermined due to the level of damage, but it's suspected to be electrical in nature.

He said the fire was fully doused by around 9 a.m. Tuesday morning.

Montpellier said he suspects it was a block heater that shorted out that caused the fire. The shelter that burned along with the buses was where the vehicles were plugged in.

Even with the traumatic events of the night before, Montpellier's bus drivers were able to do their bus runs as usual Tuesday morning.

He said he actually had exactly five spare buses, although one of his buses was in for repairs, meaning he was one short.

Other bus operators in the area have stepped up to loan him buses so he has enough to do his runs, with a few to spare.

C&D bus lines, which Montpellier owns with wife Diane, has 18 buses that service bus routes in the Rayside-Balfour area.

Montpellier said he's now in the process of figuring out exactly how much the buses that burned were worth (they were all purchased in different years) and talking to his insurance company.

“Thirty-six years I've been in business, and this is the first thing that ever happened to me,” he said. “Phoof, it's a shock.”

Firefighters were called out to the blaze on Montpellier Road at 11:46 p.m. March 4.

Nobody was injured in the blaze.

“@CGSFireServices crews from 5 Stations working an active fire in Chelmsford and several School Buses were severely damaged as a result,” said Jesse Oshell of Greater Sudbury Fire Services on Twitter at 3:08 a.m. Tuesday.

“Not to worry though, the operator has made arrangements and NO student transportation delays are expected as a result!”