WASHINGTON — The U.S. unemployment rate fell to 13.3% in May from 14.7%, and 2.5 million jobs were added — a surprisingly positive reading in the midst of a recession that has paralyzed the economy in the wake of the viral pandemic.
Jun 5, 2020 11:29 AM By: Canadian Press 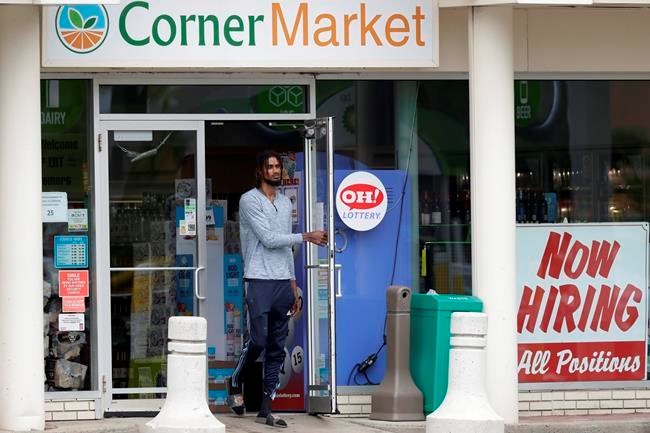 WASHINGTON — The U.S. unemployment rate fell to 13.3% in May from 14.7%, and 2.5 million jobs were added — a surprisingly positive reading in the midst of a recession that has paralyzed the economy in the wake of the viral pandemic.

The May job gain suggests that businesses have quickly been recalling workers as states have reopened their economies.

Other evidence has also shown that the job market meltdown triggered by the coronavirus has bottomed out. The number of people applying for unemployment benefits has declined for nine straight weeks. And the total number of people receiving such aid has essentially off.

The overall job cuts have widened economic disparities that have disproportionately hurt minorities and lower-educated workers. Though the unemployment rate for white Americans was 12.4% May, it was 17.6% for Hispanics and 16.8% for African-Americans.

Even with the surprising gain in May, it may take months for all those who lost work in April and March to find jobs. Some economists forecast the rate could remain in double-digits through the November elections and into next year.

THIS IS A BREAKING NEWS UPDATE. AP’s earlier story is below:

America's workers likely suffered another devastating blow in May, with millions more jobs lost to the viral pandemic and an unemployment rate near or even above 20% for the first time since the Great Depression.

Economists have forecast that the government will report Friday that employers shed 8.5 million more jobs last month on top of 21.4 million lost in March and April. A figure that large would raise the total losses since the coronavirus intensified nearly three months ago to almost 30 million — more than triple the number of jobs lost during the 2008-2009 Great Recession.

The economy has sunk into what looks like a deep recession, and most economists foresee unemployment remaining above 10% — its peak during the Great Recession — through the November elections and into next year.

A report Thursday on applications for unemployment benefits reinforced the picture of a bleak job market: The number of people seeking jobless aid last week was double the previous record high that prevailed before the viral outbreak occurred.

Still, that report did offer a few glimmers of hope. As restaurants, movie , gyms, hair salons and other retail establishments gradually reopen, job cuts are slowing and employers are recalling some of their laid-off workers. The total number of people receiving unemployment aid rose slightly, the government said, but stayed below a peak of 25 million reached two weeks earlier. And the number of laid-off workers applying for aid, while historically high, has declined for nine straight weeks.

The economic shock, like the pandemic itself, has widened economic disparities that have disproportionately hurt minorities and lower-educated workers. More than 55% of African-Americans say they or someone in their household has lost income since mid-March, compared with 43% of whites, according to a weekly survey by the Census Bureau. For Hispanics, the figure is 60%. The pandemic has especially eliminated jobs, at least temporarily, at restaurants, hotels, retail chains and other lower-wage industries.

The street protests over George Floyd's killing that led to some vandalism and looting in dozens of cities won't affect Friday's jobs figures, which were compiled in the middle of May. But business closures related to the unrest could cause job losses that would be reflected in the June jobs report to be issued next month.

A few businesses are reporting signs of progress even in hard-hit industries. American Airlines, for example, said this week that it would fly 55% of its U.S. routes in July, up from just 20% in May.

And the Cheesecake Factory said one-quarter of its nearly 300 restaurants have reopened, though with limited capacity. Sales at those restaurants are at nearly 75% of the levels reached a year ago, the company said. Both companies' share prices rose.

Those limited gains may lead to more rehiring as companies slowly restart shuttered businesses. But economists say the pace of hiring will then likely lag as a severe recession and high unemployment hold back consumer spending, the main driver of the economy.

Erica Groshen, a economist at Cornell University and a former commissioner of the Labor Department's Bureau of Labor Statistics, said hiring could ramp up relatively quickly in coming months and reduce unemployment to low double-digits by year's end.

“Then my inclination is that it will be a long, slow slog," she said.

Overhanging the jobs picture is widespread uncertainty about how long the unemployed will remain out of work. Most of the layoffs in recent months were a direct result of the sudden shutdowns of businesses in response to the coronavirus pandemic.

Though many of the unemployed have said they expect their layoffs to be temporary, many large businesses won't rehire everyone they laid off. And some small employers might not reopen at all if the recession drags on. Until most Americans are confident they can shop, travel, eat out and fully return to their other spending habits without fear of contracting the virus, the economy will likely remain sluggish.

Even if just one-third of the U.S. job losses turn out to be permanent, that would leave roughly 10 million people out of work. That is still more than all the jobs lost in the Great Recession. A hole that size would take years to fill. Oxford Economics estimates that the economy will regain 17 million jobs by year’s end, a huge increase by historical standards. But that would make up for barely more than half the losses.

Gwyneth Duesbery, 22, returned this week to her job as a hostess at a steakhouse where she lives in Grand Rapids, Michigan, as the restaurant prepares to reopen. Duesbery said she is grateful for the opportunity, given that she hasn't received unemployment benefits since the restaurant closed in March and has run through her savings.

She will spend this week helping to clean the restaurant and setting tables 6 feet apart. The restaurant will be able to seat only about one-quarter of its usual capacity.

The restaurant, Bowdie's Chop House, has reservations for about 20 people for its opening night Monday and said it has drawn plenty of interest from longtime customers. Still, Duesbery worries about her health.

“I am concerned that it will expose me to potential diseases, and expose others, no matter the precautions that we take," she said. “It’s kind of uncharted waters."