KAMPALA, Uganda — Ugandan pop star and opposition leader Bobi Wine, who released a song urging Africa's people to wash their hands to stop the spread of the new coronavirus, is criticizing African governments for not maintaining better health care sy
Mar 29, 2020 8:05 AM By: Canadian Press 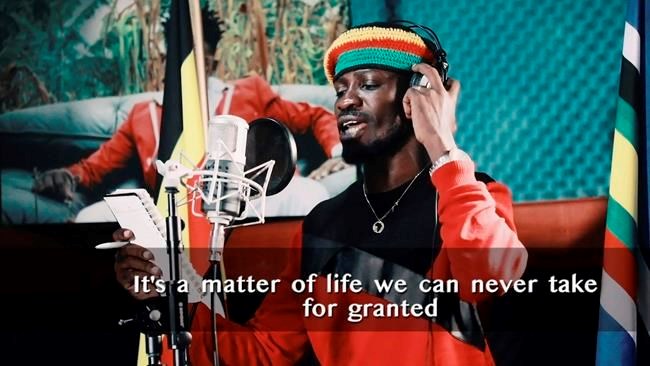 KAMPALA, Uganda — Ugandan pop star and opposition leader Bobi Wine, who released a song urging Africa's people to wash their hands to stop the spread of the new coronavirus, is criticizing African governments for not maintaining better health care systems for the continent's 1.3 billion people.

In his new song, “Corona Virus Alert,” Wine and collaborator Nubian Li highlight prevention measures against the virus, which now has been reported in at least 46 of Africa's 54 countries.

Speaking to The Associated Press about the song, Wine — a popular musician, legislator and presidential aspirant whose real name is Kyagulanyi Ssentamu — said it is time for Africa's leaders to channel more resources toward building functional health care systems that serve both the rich and the poor.

As the coronavirus spreads across Africa, he said, “this is the time for them (the continent's leaders) to remember that a functional health care system is not only a benefit for the poor but also the rich, because right now, as we stand, they cannot travel abroad for medical care. They have to face the same ailing medical care to deal with them. And this should be a message to them.”

Wine's criticism of Uganda's government has made him a leader of those opposing long-time president, Yoweri Museveni, who has ruled the East African country since 1986. Museveni is expected to seek reelection next year and Wine has said he will challenge the president.

Since becoming a potent government critic, Wine's attempts to perform and hold rallies have been blocked by authorities. He has complained of harassment and beatings by security forces when they block his public appearances. Authorities accuse him of trying to lure young people into rioting and have charged him with multiple criminal , including treason, which he denies.

Many Ugandans are angered by newspaper reports of high-ranking officials seeking medical treatment abroad at the expense of taxpayers while government-run health in remote areas routinely run out of basic supplies such as gloves and painkillers. The government spends less than 15% of its budget on health and local media frequently cite corruption in health-related procurement deals.

The World Health Organization also has urged African Union members to a 2001 pledge to allocate at least 15% of their annual budgets toward the health sector. The U.N. agency reported in 2011 that nearly all African countries failed to meet that target.

The WHO chief has warned Africa to "prepare for the worst” as the coronavirus begins to spread locally, amid worries that the continent's fragile health systems are not prepared to handle the challenge. The new virus has been slow to reach Africa, but its spread across the continent is picking up pace. Africa has registered more than 3,500 cases, with South Africa registering the largest number at more than 1,000.

Uganda has reported 30 cases of COVID-19, mostly people who recently through the United Arab Emirates city of Dubai.

In recent days Museveni has led the government's efforts to combat the virus, giving broadcasts in which he explains how the virus infects the human body as government health experts sitting nearby back him up. Museveni has closed schools and temporarily banned religious and cultural gatherings to curb the spread of the virus. Uganda's only international airport has been shut down and public transport restricted.

For most people, the new coronavirus causes mild or moderate symptoms, such as fever and cough that clear up in two to three weeks. For some, especially older adults and people with existing health problems, it can cause more severe illness, including pneumonia and death.