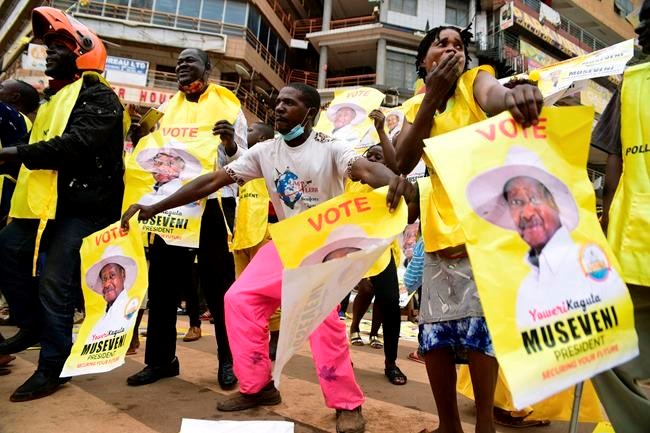 In a generational clash watched across the African continent with a booming young population and a host of aging leaders, the 38-year-old singer-turned-lawmaker Wine posed arguably Museveni's greatest challenge yet. The self-described “ghetto president” had strong support in urban where frustration with unemployment and corruption is high. He has claimed victory.

In a phone interview from his home, which he said was surrounded by soldiers who wouldn't let him leave, Wine urged the international community to “please call Gen. Museveni to order” by withholding aid, imposing sanctions and using Magnitsky legislation to hold alleged human rights users accountable.

Wine repeated that all legal options are being considered, including challenging the results in court and calling for peaceful protests.

The electoral commission said Museveni received 58% of ballots and Wine 34%, and voter turnout was 52%, in a process that the top United States diplomat to Africa called “fundamentally flawed.”

The commission advised people celebrating to remember COVID-19 precautions, but reaction in the capital, Kampala, was muted. At one point, hundreds of Museveni supporters on motorcycles sped by, honking and chanting. The military remained in the streets.

AP journalists who tried to reach Wine's home on Kampala's outskirts were turned away by police. Wine has said he is alone with his wife, Barbie, and a single security guard after police told a private security company to withdraw its protection ahead of Thursday's election.

“I'm alive,” Wine said. After declaring “the world is watching” on the eve of the vote, he said “I don’t know what will happen to me and my wife" now. He said he won't leave Uganda and abandon its 45 million people to the kind of treatment he has faced.

The vote followed the East African country’s worst pre-election violence since the 76-year-old Museveni took office in 1986. Wine and other candidates were beaten or harassed, and more than 50 people were killed when security forces put down riots in November over his arrest. Wine, whose real name is Kyagulanyi Ssentamu, was detained several times while campaigning but never convicted. He said he feared for his life.

This month, Wine petitioned the International Criminal Court over alleged torture and other abuses by security forces and named several officials including Museveni.

In response to his allegations of vote-rigging, Uganda’s electoral commission said Wine should prove it. Wine says he has video evidence and will share it once internet access is restored.

Museveni said in a national address that “I think this may turn out to be the most cheating-free election since 1962,” or independence from Britain.

The electoral commission deflected questions about how countrywide voting results were transmitted during the internet blackout by saying “we designed our own system.”

“We did not receive any orders from above during this election,” commission chair Simon Byabakama told reporters, adding his team was “neither intimidated nor threatened.”

While the president holds on to power, at least nine of his Cabinet ministers, including the , were voted out in parliamentary elections, many losing to candidates from Wine’s party, local media reported.

Tracking the vote was further complicated by the arrests of independent monitors and the denial of accreditation to most members of the U.S. observer mission, leading the U.S. to call it off. The European Union said its offer to deploy electoral experts “was not taken up.”

“Uganda’s electoral process has been fundamentally flawed,” the top U.S. diplomat for Africa, Tibor Nagy, tweeted, warning that “the U.S. response hinges on what the Ugandan government does now.”

The U.S. State Department urged “independent, credible, impartial, and thorough investigations” into reports of irregularities. It condemned “the continuing attacks on political candidates” and called for the immediate restoration of the internet and social media.

“We reiterate our intention to pursue action against those responsible for the undermining of democracy and human rights in Uganda,” it said.

Museveni, once praised as part of a new generation of African leaders and a longtime U.S. security ally, still has support in Uganda for bringing stability. He once criticized African leaders who refused to step aside but has since overseen the removal of term limits and an age limit on the presidency.

He alleged repeatedly that foreign groups were trying to meddle in this election, without providing evidence. He accused Wine of being “an agent of foreign interests.” Wine denies it.

The head of the African Union observer team, Samuel Azuu Fonkam, told reporters he could not say whether the election was free and fair, noting the “limited” mission which largely focused on Kampala. Asked about Wine’s allegations of rigging, he said he could not “speak about things we did not see or observe.”

The East African Community observer team noted “disproportionate use of force in some instances” by security forces, the internet shutdown, some late-opening polling stations and isolated cases of failure in biometric kits to verify voters. But it called the vote largely peaceful and said it “demonstrated the level of maturity expected of a democracy.”

Uganda’s elections are often marred by allegations of fraud and abuses by security forces.