JERUSALEM — Israeli Prime Minister Benjamin Netanyahu on Thursday called for the formation of an emergency government to confront a growing crisis over the coronavirus, offering a potential way out of the deadlock that has paralyzed the political sys
Mar 12, 2020 5:13 PM By: Canadian Press 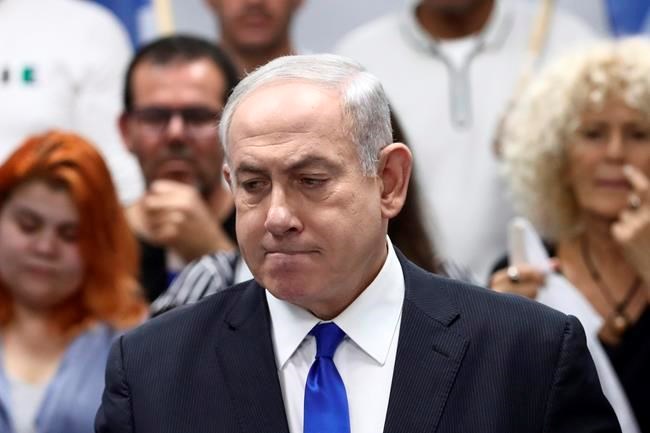 JERUSALEM — Israeli Prime Minister Benjamin Netanyahu on Thursday called for the formation of an emergency government to confront a growing crisis over the coronavirus, offering a potential way out of the deadlock that has paralyzed the political system for the past year.

Netanyahu made the offer in a nationally televised address, saying the virus does “not differentiate” between Jews and non-Jews or between the political left and right.

“I call for the formation now, even this evening, of a national emergency government,” he said.

“It will be an emergency government for a limited period. Together, we will fight to save the lives of citizens,” he added, saying that politics should be put aside.

His chief rival, former military chief Benny Gantz, said he was willing to discuss the possibility of a national unity government and that his party will do “everything in our power to see it move forward."

The conciliatory language marked a sharp change after months of acrimonious campaigning and heightened rhetoric in the wake of another inconclusive election earlier this month.

Israel has been relatively insulated from the coronavirus scare, with just over 100 cases diagnosed so far. But the numbers have begun to creep upward in recent days.

Israel has imposed a number of tough restrictions to slow the spread of the virus, placing tens of thousands of people into protective home quarantine, ordering all Israelis who return from overseas into quarantine and barring almost all tourists from entering the country.

Netanyahu announced that schools and universities would be closed through the end of the Passover holiday in mid-April, with the exception of preschools, boarding schools and special education facilities.

Israel's Health Ministry has barred all gatherings of more than 100 people.

More than 127,000 people in more than 110 countries have been infected. The vast majority are in just four countries: China and South Korea — where new cases are declining —and Iran and Italy, where they are not. More than 4,700 people have died worldwide.

This month's election was Israel's third to end in deadlock in the past year.

Netanyahu's Likud emerged as the single largest party but fell short of securing a majority of seats in parliament required to form a government.

Although a slight majority of lawmakers oppose Netanyahu, they are deeply divided on other issues. Gantz, of the centrist Blue and White party, also appears to lack enough support to form a government.

A unity government between the two large parties would be the most straightforward way out of the crisis.

But after three contentious campaigns, there is great animosity between the two leaders, and it remains unclear who would lead a unity government. Still, the growing coronavirus threat may be the spark that brings the sides together.

Gantz has previously ruled out a partnership with Netanyahu, citing the prime minister's upcoming trial on corruption charges, which is set to begin next week.

Netanyahu has insisted that he lead any unity government.

Citing the urgent health crisis, Gantz appeared to be open to compromise with Netanyahu.

“Given the circumstances, we are willing to discuss the possibility of establishing a broad national unity government, reflective of the entire Israeli public,” he said in a statement late Thursday.

“We will do everything in our power to see it move forward for the sake of the state of Israel and its citizens.”