International traveller is 1st case of new virus in Maine

AUGUSTA, Maine — A woman in her 50s who travelled internationally is the first person in Maine to test positive for the coronavirus after voluntarily isolating herself and reporting to a hospital emergency room for testing, officials said Thursday.
Mar 12, 2020 4:24 PM By: Canadian Press 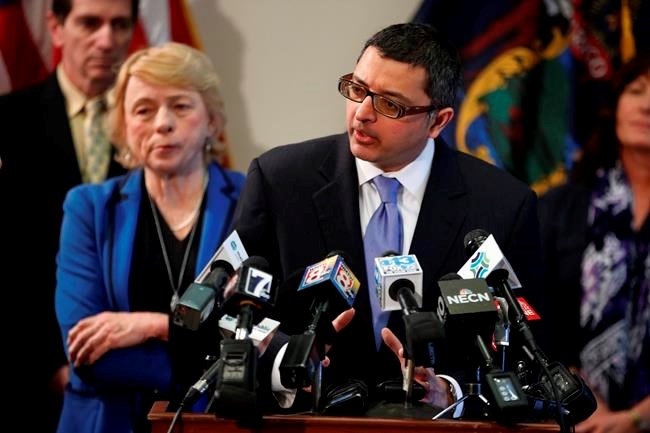 AUGUSTA, Maine — A woman in her 50s who internationally is the first person in Maine to test positive for the coronavirus after voluntarily isolating herself and reporting to a hospital emergency room for testing, officials said Thursday.

The woman is self-quarantined at her home in Androscoggin County. State epidemiologists are speaking to her and her medical provider to assess travel history, and it has started to investigate possible community exposure, Gov. Janet Mills said.

“With one presumptive positive case, Maine has a unique window of opportunity to delay an outbreak, like those we see in other states, and to minimize our exposure," Mills said.

Maine is the last state in New England to record a positive test for the new virus. It was only a matter of time, officials said, as the virus spread through the region, and around the world.

The woman suffered respiratory symptoms after visiting a “country of concern” and provided a sample at Central Maine Medical Center in Lewiston, said Kate Carlisle, spokeswoman for the hospital's parent company. The sample was tested by the state lab in Augusta and will be sent to a federal lab for confirmation.

In response to the spread of the virus, the governor announced a series of steps aimed at slowing, or stopping, the spread of illness a day after the World Health Organization declared a pandemic.

Mills announced she was suspending nonessential, out-of-state travel for 30 days for state workers. She also recommended the postponement of nonessential indoor gatherings of 250 people or more, and took steps to ensure patient reimbursement for tests and treatment through a declaration of an insurance emergency.

Dr. Nirav Shah, director of the Maine Center for Disease Control, urged people to "prepare but not panic." He said that means taking care of themselves and protecting themselves, and staying informed about developments. "This is a situation where fear and misinformation can spread more quickly than the coronavirus itself," he said.

For most people, the new coronavirus, which causes the disease COVID-19, results in only mild or moderate symptoms, such as fever and cough. For some, especially older adults and people with existing health problems, it can cause more severe illness, including pneumonia, or death.

The vast majority of people recover. People with mild illness recover in about two weeks, while those with more severe illness may take three to six weeks to recover, according to the World Health Organization.

The virus outbreak has roiled the stock market and affected travel around the world, with many events being . The governor's announcement came after the University of Maine System and Bowdoin College announced that students would be receiving instruction remotely for the remainder of the semester.

Cancellations continued Thursday: Hockey East its tournament, in which UMaine was hosting Connecticut in a weekend quarterfinal series in Orono; the city of Portland its annual St. Patrick's Day Parade, set for Sunday; and the state bicentennial committee a party celebrating Maine's statehood on Sunday.

The buzzwords of the governor's news conference were “social distancing.” The idea was to limit gatherings in which the virus could be easily spread.

“Reducing the interaction of large groups of people across the state, I think, will delay an outbreak and may substantially reduce the spread. Delaying or mitigating an outbreak will reduce the strain on our healthcare system so that it can respond effectively to people diagnosed with the virus, and still take care of their regular patients,” the governor told reporters.

The news of the state's first coronavirus case came a day after the announcement that the state was getting $4.6 million from the federal government to help fight the virus.

The funding was made available through the $7.8 billion coronavirus appropriations package that passed Congress last week. It will allow Maine to carry out surveillance, epidemiology, laboratory work, infection control, mitigation, communications, and other preparedness and response activities, officials said.