What a great IDEA!

The Sault’s IDEA Inc. (Integrated Design, Engineering and Architecture) is the subject of this week’s Mid-Week Mugging
Jul 25, 2018 10:00 AM By: Darren Taylor 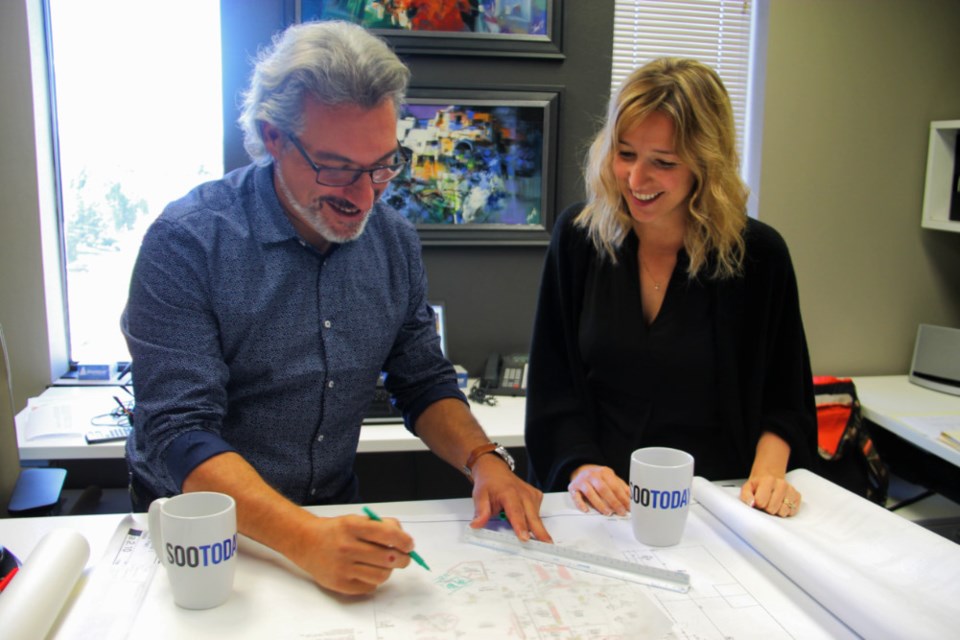 As you drive, cycle or walk around Sault Ste. Marie, you’ll recognize buildings designed by IDEA (Integrated Design, Engineering and Architecture) – or, you also likely work, play or study in one.

SooToday sat down and spoke with Franco Pastore and Jeanette Biemann, two of the company’s four owners, presented them with two complimentary SooToday coffee mugs, and chatted about the fascinating careers of architecture and engineering.

IDEA, most recently known as EPOH before rebranding in 2017, has designed many newer, landmark Sault buildings, including:

IDEA’s buildings are safe, modern, healthy places, with a great deal of space and natural light necessary for today’s larger community buildings, and, in the case of SAH and the border crossing buildings on both sides of the St. Marys River, packed with hi-tech features which aren’t readily visible.

“It’s pretty awesome, you start to get this signature,” Jeanette said, stating her children visually recognized the company’s work on the Essar Centre before they were told of it.

“You can see a little bit of the consistency between St. Mary’s College, the Sault Area Hospital, the Essar Centre, and that’s not deliberate. The hand and the brain produce things that are consistent, we don’t deliberately try to make buildings similar, but it is a good characteristic because I guess it associates a firm with a particular style of building,” Franco said.

“I like big, monumental space and when I walk through our buildings with other people and see how they react and get that extra experience in the spaces we create, that’s what excites me the most. Sure, I’m proud, but I don’t dwell too much on it because we’re constantly looking forward to our next project (much like a singer/songwriter looks forward to improving on his/her next album).”

Franco, born and raised in the Sault, returned to his hometown after completing his professional education and initial training in architecture.

Franco said he dreamed of being an architect as an elementary school student.

“It’s technology, it’s art. I was always creative when I was  a child, a very active artist and my family had a background in construction, so I thought about how to take everything I knew and experienced and turn it into a profession…(being an architect) is the only thing I wanted to do.”

“I had a great opportunity to come back to the Sault and eventually became an owner in this practice (beginning in 1994).”

Jeanette is a Toronto native whose husband is from the Sault. After university, the couple moved to the community, where she gained employment with EPOH, IDEA’s predecessor, in 2004.

“It’s been great. I go back to visit my family, but I do love living up here and I wonder why people live in the cluster that is southern Ontario. I enjoy being here very much, it’s a great place to raise a family, have a great job, and it takes me seven minutes to get to work. It used to take me an hour and a half each way,” Jeanette smiled, adding she and her family enjoy the Sault and area’s summer and winter outdoor activities.

Jeanette credits her father, with his love of science and engineering as an Ontario Hydro employee, with inspiring her to get involved in the engineering field.

“He told me if you get into a field like engineering, every day will be different, and it certainly is. There’s always a different project and a different challenge to solve, and I really like that aspect of engineering.”

“You drive by them (local buildings designed by IDEA) and you look and you say ‘I was part of something really amazing that will live on.’”

“Engineering is so diversified, you could be designing cars, but what Jeanette does, engineering particularly related to buildings...it’s important because buildings affect people more directly, affect life in a meaningful way,” Franco added.

“How much time do people spend in their offices? So many people spend the majority of their daytime in an office building, so making it an enjoyable, comfortable place for them to work everyday, it’s really satisfying to hear them say ‘we enjoy the space we work in,’” Jeanette said.

The company, Franco said, can trace its roots back to the 1950s in Elliot Lake, evolving through a series of different names and business partners over the years.

It was most recently known as EPOH (an acronym containing the names of the company’s previous group of partners), rebranding to IDEA in 2017.

IDEA is indicative of a new trend.

“Predominantly, in Canada, there are architectural firms, or engineering firms, or project management firms. There’s a greater trend to integrate the three, and we’re one of the first ones that have done it in Ontario, and in the Sault we were the first to do so...strategically, we started to do that back in 1997. That’s what makes us diverse,” Franco said.

Franco, Jeanette and Ken work and reside in the Sault, while Ryan has started up an IDEA office in Ottawa.

Franco said he is looking forward to the completion of  IDEA’s work on Sault College’s new Institute of Environment, Education and Entrepreneurship (iE3) project, as an example of architectural revival of a 50-year-old building.

“With iE3 we made some really bold decisions in terms of how to create this new institute...it’s bold because we tried to reintegrate facilities that were almost forgotten and needed new investment. It’ll be really interesting to see how people will react to that (when it is complete in August).”

Do either Jeanette or Franco have a favourite building they’ve worked on?

Jeanette said that was a tough one to answer, preferring to look at it in terms of the clients they have had.

“We just completed the renovations and additions at ARCH. Working with ARCH, we got to meet the management team there, and they’re incredible,” Jeanette said.

“The various management teams we work with, they shape us, so they’re giving back more to us than what we’re giving to them,” Franco said.

“I think the ones I’m most proud of are St. Mary’s College, the work done at Sault College’s Health and Wellness wing and iE3, the Essar Centre for sure because it’s the community’s living room, and Sault Area Hospital...they’re the ones that have had the most impact,” Franco said.

For more on IDEA, check out the group's website