Christmas Cheer is the subject of this week’s SooToday Mid-Week Mugging
Dec 19, 2018 10:00 AM By: Darren Taylor 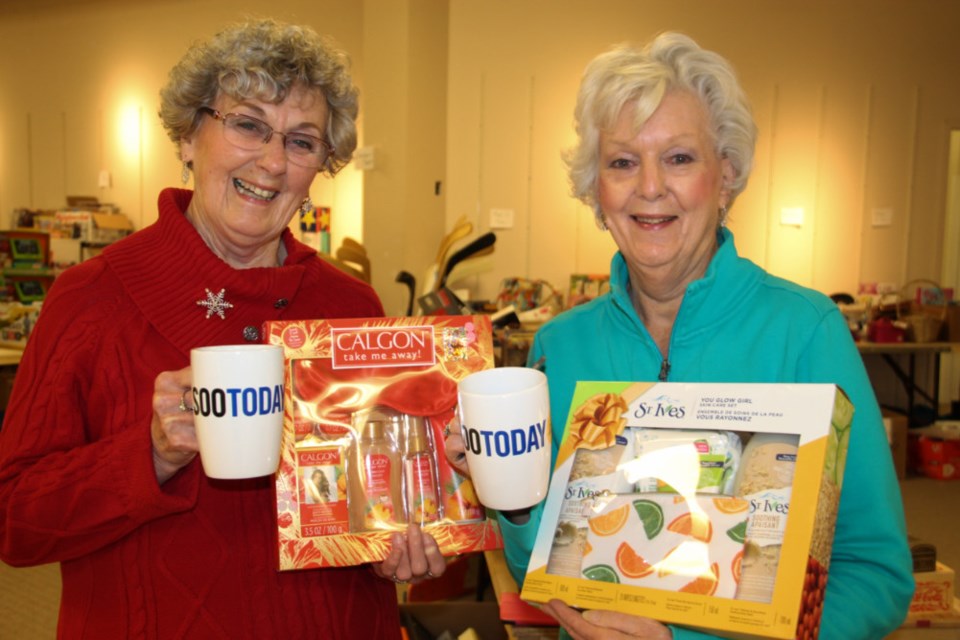 When you think of charity in Sault Ste. Marie, Christmas Cheer is one of the many good causes that comes to mind.

Last week, SooToday visited the Christmas Cheer volunteer team, located (for this year at least) in the former Sears store in Station Mall, and dropped off a pair of complimentary SooToday coffee mugs.

“We love this space. We’ve been able to spread out because we have the space. We’re very fortunate because we’re being allowed to store without paying for storage, because we have a lot of equipment we store from year to year with the caveat that if a new tenant moves in, then we have to move out,” said Diane Marshall, Christmas Cheer convenor.

“The price is right,” Marshall smiled.

Donations for Christmas Cheer baskets of food, toys and other goods for those in need is scheduled to take place Thursday, Dec. 20.

Donations of all types of items came in at a good pace this season, said Jill Raycroft, head of Christmas Cheer’s packing area.

“It’s been pretty good. I think it’s our location, the way the schools have rallied as well as different office groups. The office groups have gift exchanges for Christmas Cheer instead of exchanging gifts with other office members. They seem to have fun doing that.”

“We’re using at least half, maybe three quarters, of the first floor.”

Raycroft said she has approximately 20 steady members in her own packing department alone.

“They’re familiar with the packing, what to do and how to do it, but we do break some new volunteers in as well. There’s a ‘Mr. Fix It’ department, the packing department, the people who handle the dolls, the people who refurbish the toys, the book people, there’s a fellow that does puzzles and games, and a lady who sorts out the knitting that comes in and gets it all stitched together and sorts it according to size.”

Station Mall, for obvious business reasons, would like to fill the former Sears space with a new tenant(s), but if that should not happen over the next few months, Raycroft said “we’re hoping we can come back to this space next year.”

Raycroft has been with Christmas Cheer for 40 years.

“It’s helping others to hopefully have a better Christmas than what they would have had without Christmas Cheer. We’ve gotten our children involved in things we do, which is good for them, and we have great-grandchildren right now who do fundraisers and bring toys in, it’s their third year of doing that, and they’re just six and seven.”

“For me, it’s all about helping other people,” Raycroft said.

The local Christmas Cheer effort has been around since the 1950s in various forms, handled at one time by the City of Sault Ste. Marie, then the May Court Club, before the current crew of Christmas Cheer volunteers took it over.

“I’m just a newbie. I’ve only been here for 22 years, not like Jill,” chuckled Marshall.

“It makes a difference in our community, helping others have a happier Christmas than what they would have alone.”

“I always say how generous our community is. After people bring in their donations, they’ll ask ‘what else do you need?’ and then they’ll go and get it for us. Companies help with forklifts, hockey sticks, skates...our community, I think, is outstanding for generosity,” Marshall said.

The Christmas Cheer Depot has had several one-year-only locations in recent Christmas seasons.

In 2017, it was located in the now-vacant St. Pius X Catholic School at 48 Oryme Avenue, a side-street heading west off Great Northern Road, just south of Quattro Hotel and Conference Centre.

Previously, it was located in the now-demolished former Sir James Dunn Collegiate, then in 2015 at the former Alexander Henry High School and, in 2016, at the former Transcom building at 24 Second Line West.