Virtually everything today is a computer and can be fixed, says shop owner

Joel Niergarth, owner of 2nd Life Computer Repairs, feels good about keeping devices out of the landfill
Sep 30, 2020 10:30 AM By: Darren Taylor 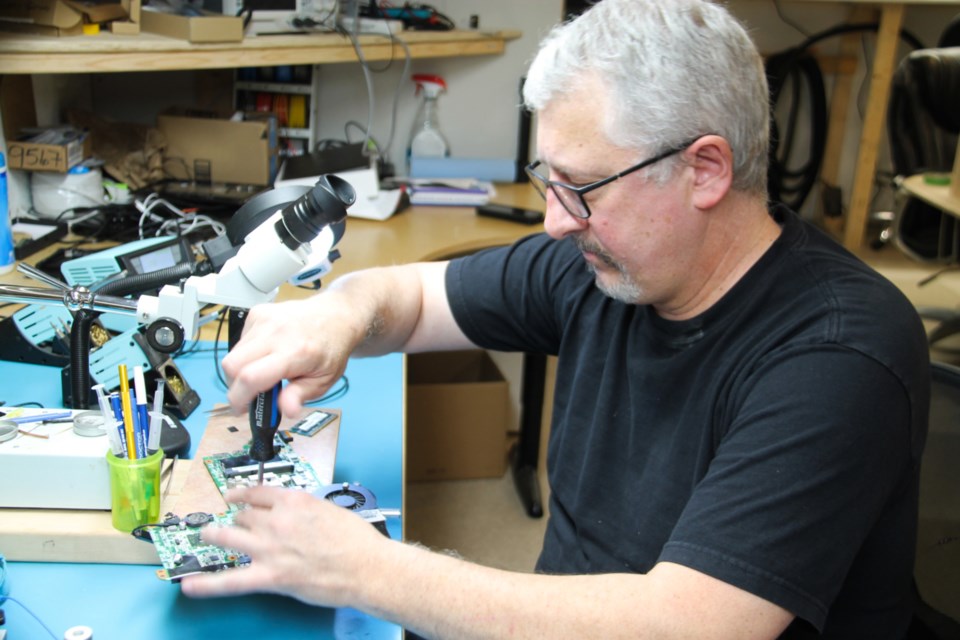 “I’ve got a better ability to separate work from home life now than I ever did at any point in the past.”

That from Joel Niergarth, 2nd Life Computer Repairs owner/operator, speaking to SooToday from his east-end shop.

“We love it here,” said Joel of living in the Sault after he and his wife Cathy lived much of their lives in the hustle and bustle of southern Ontario.

After enjoying several trips to the Sault and area to visit relatives, Joel and Cathy left the Kitchener/Waterloo region and moved to the Goulais River area in 2008, recently relocating to the Sault.

“Having an electronics background, friends and relatives would ask me to look at their stuff, fix their computers, and a friend said ‘hey, why don’t you go into business doing this sort of thing?’” Joel said.

After considering the matter for a few weeks, he decided ‘why not?’

“The vast majority of my business was through word of mouth. Things grew and grew,” Joel said.

A new business location at 149 Black Rd., easy to spot with a billboard at the corner of Black Road and McNabb Street became available in March 2019.

“We’re happy here. There’s been a great increase in business. The visibility is tremendous... almost immediately the volume doubled and it’s been going up steadily.”

“Almost anything can be fixed... it keeps us busy,” Joel said, foreseeing a day in which he will be able to hire additional employees.

“If somebody brings in a $1,000 cell phone and we can fix it, they’re really happy about that, and that’s great to see.”

Environmentally minded, Joel added “Americans throw out about 200 million cell phones a year and a lot of people don’t realize there are a lot of nasty chemicals that go into making them. Every device, every computer I can fix. I know I’m keeping it out of the landfill.”

Joel was born and raised in Kitchener, Ont.

“In high school, I was one of the cool kids who had his own computer, back in the early 1980s,” he chuckled.

“My father was an electronics technician so I had a lot of exposure to that, so I took that in high school, then I went to Conestoga College for three years for electronics and computer systems.”

He worked in information technology for many years for major insurance companies, the Toyota Canada manufacturing plant in Cambridge and Research In Motion (RIM, which introduced the BlackBerry brand of smartphones and tablets) in Waterloo.

In the late 1990s, Joel helped Toyota Canada prepare for the potential worldwide Y2K computer crash as the year 2000 approached.

“That was a major focus for a few years,” he recalled.

“If they (the public and private sectors around the world) hadn’t poured the resources into it that they did, hundreds of billions of dollars, the world would’ve been in total chaos. There was a ton of software that would have failed when the year rolled over to 2000. The networks the grocery stores order through, trucking, delivery, everything runs on software, and if the world hadn’t spent the money in time on it, everything would’ve fallen apart.”

Of his time at Research In Motion, Joel said “those were great days.”

“The company was growing like crazy. Their stock price kept climbing and climbing, there were a lot of perks, there were luncheons, Aerosmith concerts, that was a fun company to work for.”

But, returning to the topic of his new hometown of Sault Ste. Marie, Joel said “It’s so much more relaxed. It’s mellow here. We love it. The outdoors are great, the air is cleaner, the pace of life is good. People talk to one another... this is a wonderful place to live.”