The Sault’s most ‘Eazygoing’ delivery man

Eazy Express, employee Darren Robertson the subject of this week’s SooToday What’s Up Wednesday
Aug 14, 2019 10:00 AM By: Darren Taylor 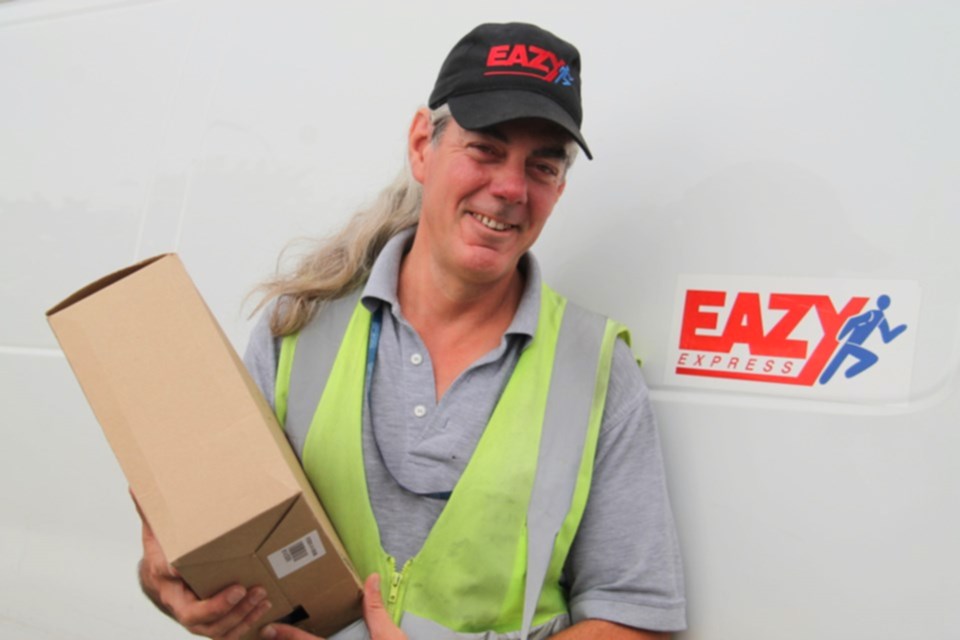 The white vans of locally-owned and operated parcel delivery service Eazy Express can be seen throughout Sault Ste. Marie every weekday.

Darren takes time to get to know his customers.

“If you treat the people you deliver to with respect and decency you’re going to get that back. I’ve developed a rapport and relationships with people I deliver to, and it’s great,” Darren said, speaking to SooToday.

“I’ll be driving along on my route and I’ll be waving at my customers in their yards when the weather’s nice. I feel like I’m in a parade,” Darren chuckled.

“I like this job because of the people I deliver to. When I go to events downtown I’ll see some of the people I deliver to and say ‘hey, how are you doing?’ There are people from different walks of life I’ve met when I’m delivering, and if I have time for a conversation, there are a lot of things I can learn from listening to other people’s stories, how they are doing in their health. It’s the little things like that I enjoy.”

Darren not only enjoys interacting with his customers, but in many cases, their pets as well.

Originally from Toronto, Darren moved north to the Sault and has worked for Eazy Express since 2012.

“It’s been an interesting time.”

“A day in the life at Eazy starts early, sorting all the parcels from Canada Post. We organize them as to how we’re going to deliver them for the day, load them on the van, go deliver them, go back to Canada Post and reload up to four times a day on heavy days,” Darren said.

“We get a lot of parcels because of online shopping...at Christmas we’ll be out there to about eight or eight-thirty at night (including Saturdays and Sundays). We’re all troopers and we give it our best.”

When not in his Eazy van, Darren thoroughly enjoys music.

“I’ve been playing guitar for over 35 years. I’ve got a number of guitars and keyboards. I write my own music, and a lot of the music I write is mainly for movie soundtracks or video game soundtracks.”

“To be doing something like what Hans Zimmer does would be fantastic, or like Danny Elfman doing movies for Tim Burton would be a dream come true.”

“I like a lot of different musical styles. I like to have a lot of guitar in my music and balance that off with string sections or a horn section, depending on the movie scene,” said Darren, who does all his recording in his home studio.

The months of August and September will also mark the second time Darren will be a committee member and a judge for The Soo’s Got Talent competition, a local talent show and ARCH fundraiser (see the event’s Facebook page for information on August and September audition dates and the Sept. 13 finale).

“It’s great to see little ones having the courage to show off what they do have and improve upon their talents. I like encouraging them to develop their talents and their art. Music is a big release to me, along with helping others.”

Eazy Express launched in Sault Ste. Marie in 1990 with a contract to deliver parcels for Canada Post, first concentrating locally, then expanding throughout northern Ontario in rural mail delivery and highway service.

By 1996, Eazy had formed relationships with other companies, distributing to 1,300 Avon Canada representatives in the Sault, North Bay, Sudbury and Timmins, the company with nearly 70 full-time and part-time employees by the end of the year.

There are approximately 10 Eazy Express drivers locally. By expanding its parcel delivery service and highway service contracts to other Canadian provinces since 2000, Eazy Express has offices in over 40 communities across Canada with over 200 full-time and part-time employees and subcontractors, truly a Sault-based, nationwide business success story.

Trending in What's Up Wednesday