Entomica, the Sault’s own live insect zoo, is the subject of this week’s SooToday Midweek Mugging
Aug 22, 2018 10:00 AM By: Darren Taylor 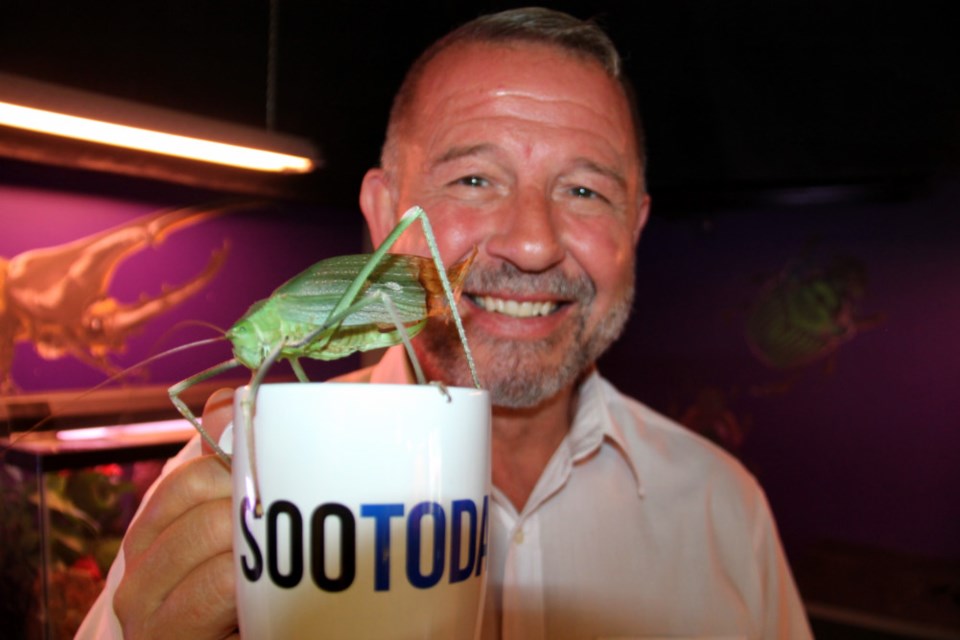 “In short, Entomica is important to me because I want to give back to a community that gave so much to me,” John told SooToday as we presented Entomica with a pair of complimentary SooToday coffee mugs.

“Sometimes,” John added, “some things you don’t pick in life. I really feel sometimes Entomica picked me somehow. Sometimes things are chosen for us. It hasn’t been easy, but it’s not about me anymore. It’s about everybody else who has contributed to Entomica and made it so special for the community.”

“I appreciate I’ve been given this opportunity and will not take it for granted."

John had the vision for a Sault live insect zoo, as an attraction for locals and tourists, for several years.

Through a mutual friend, John was introduced to Justus Veldman, the original developer of the former St. Marys Paper site, who also envisioned an insectarium for the Sault, to be located in one of the old mill’s buildings.

Eventually, John launched Entomica at Mill Market in 2014, in the old fish hatchery building, which Veldman leased from the city.

John was astonished at the public’s favourable response.

“In the first month at Entomica we were overwhelmed with all the kids and school groups, people loved holding the insects instead of seeing them behind glass,” John said, with outside groups then starting to invite Entomica staff and volunteers to visit their institutions and bring their bugs with them.

“They love them at the seniors centres, science festivals,” John smiled, Entomica having won widespread recognition and awards, such as the ‘Making a Difference’ award and ‘Best Program – Small Institution’ award from the The Canadian Association of Science Centres (CASC) in 2016.

Entomica has also taken its show on the road, to such prestigious places as The Royal Ontario Museum (ROM), each out-of-town trip undertaken by enthusiastic volunteers.

Entomica is staffed by one full-time employee, government-hired interns and a team of volunteers, John also praising Entomica’s “amazing, active board members, which come and work here and come to outreach events.”

Admission to Entomica, currently open during Mill Market hours from 12 p.m. to 4 p.m. Wednesdays and 10 a.m. to 2 p.m. Saturdays, is by donation.

“We make almost three times as much more money than we did when we were charging a fee,” John said, looking forward to Entomica’s move to the Canadian Bushplane Heritage Centre (Bushplane Museum).

Entomica’s move into its new home, John estimated, will take place in March, 2019, after major, recently-announced renovations to the Bushplane Museum are complete.

Another plan, which John emphasized is still only in its initial discussion stages with the City of Sault Ste. Marie and Mayor Christian Provenzano, is the building of a butterfly garden at Bellevue Park.

“There has been absolutely no confirmation that the project will proceed yet,” John said, adding it would not necessarily be an Entomica venture, but a City of Sault Ste. Marie venture.

John, born in Hamilton and raised in Toronto, has Greek parentage and remembers speaking only Macedonian until he was in Grade 2.

“I had a hard time learning English at first,” said John, who now speaks with a fine, articulate command of the English language.

He moved to the Sault in 1983 and chose to study forestry at Sault College, despite having been accepted at University of Toronto and other southern Ontario post secondary schools.

Why the move from the big city?

John has a humorous story behind that.

While he still remains naturally proud of his ancestry, John said “Sault Ste. Marie was 800 kilometres away from ‘my big fat Greek family’ in 1983. It was just like the movie. Everybody was at our house, if not every day, at least every weekend, so you had no time for yourself, so I thought ‘I really have to get away,’” he said with a chuckle.

He smiled when he said his family wasn’t, for a long time, at peace with him studying insects away from the family base in Toronto, but his mother (now deceased) and father eventually grew to be proud of their son’s work and visited Entomica.

He began work at the Great Lakes Forestry Centre at 1219 Queen St. E. immediately upon graduating from Sault College in 1986, at the forefront of research in insect pathology at the bug lab for 20 years, finding ways to replace chemical insecticides with biological alternatives.

During that time, he upgraded and studied biology at Lake Superior State University (LSSU).

“But you know, testing bugs and killing bugs really started weighing on me, so this job opportunity came up there to run the insect production facility and grow the bugs instead of killing them. I thought ‘I’d much rather do that.’”

Most of us who are not scientifically-minded think of insects as something to step on and squash, but they are indeed important to nature, John said, “for research, for studying behaviours, examining viruses and bacteria, their role in the environment,” pointing to the importance of growing and raising wasps as an example, as wasps kill off other, more pesky insects.