The folks at Green for Life Environmental are honoured as the subject of this week's Mid-Week Mugging
Sep 19, 2018 10:00 AM By: Darren Taylor 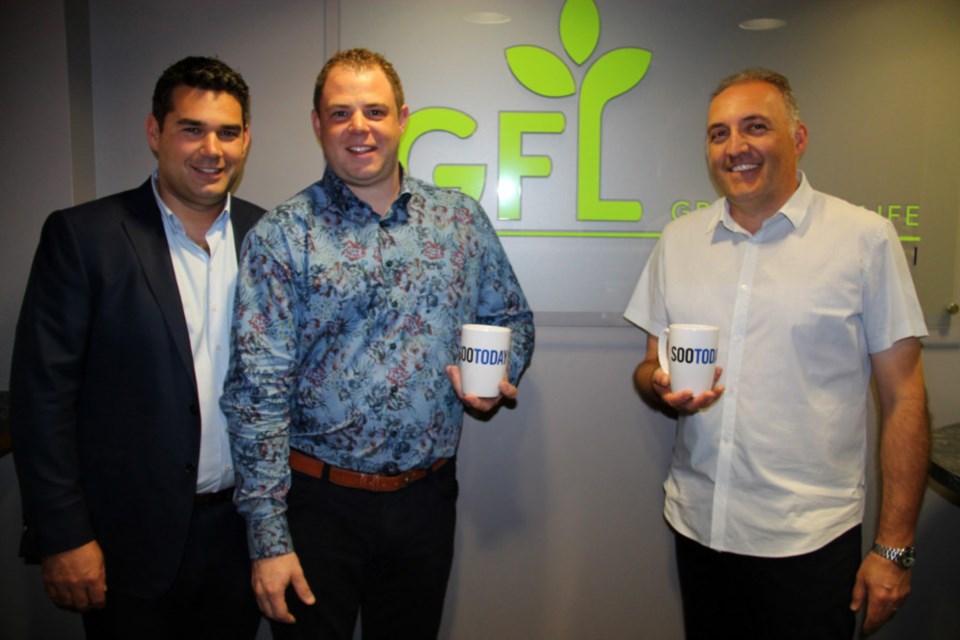 So, we thought it was only fitting the folks at GFL (Green for Life Environmental Inc.) should be honoured as the subjects of this week’s SooToday Midweek Mugging.

Patrick, a Sault native now based in Toronto, has seen GFL expand dramatically over the years.

Both Martella and Dovigi were in attendance for the Sept. 12 sign unveiling ceremony, it seeming only appropriate a large company linked to two Sault businessmen is now attached to the community’s main arena.

Patrick conferred with Martella and cousin Chris Dovigi, who manages GFL locally, and felt a return to the Memorial Gardens name was in order when the opportunity for naming rights to the city’s biggest arena came up.

“Essar didn’t really have any ties to the community and I thought it was important that we were able to come in. It meant something to me and the company, being able to have a local presence, and me being from here and growing up and playing hockey at the Memorial Gardens, there was a real significance to naming the arena.”

Today, GFL Environmental, with its head office in Toronto, has expanded to every province in Canada and into Michigan.

“We have 6,000 employees that work from Vancouver all the way to St. John’s, Newfoundland,” Patrick said.

“I moved away from home really early to play hockey, I grew up in the Sault and left home to play Junior B hockey in Waterloo, and then was drafted by the OHL and played for St. Mike’s and Erie, so I’ve been gone for 15 years, but it’s always good to come back. All my immediate family lives here. The Sault’s always home,” Patrick said.

At its May 28, 2018 meeting, city council approved the recommendation from city staff to award the naming rights of the arena to GFL.

GFL will pay the city $75,000 a year for 10 years in exchange for naming rights, year one of the agreement already paid. In addition, GFL will grant the arena a 50 percent discount on all waste and recycling containers.

Patrick said he hopes GFL will have the opportunity to pay for the naming rights to the Gardens after the 10-year period is over.

The arena, apart from being home to the Soo Greyhounds and a site for concerts, has a special significance for veterans.

The Gardens, which also has memorial plaques to Sault veterans in its foyer, is home to one of the more impressive and elaborate Remembrance Day ceremonies held in Canada every November.