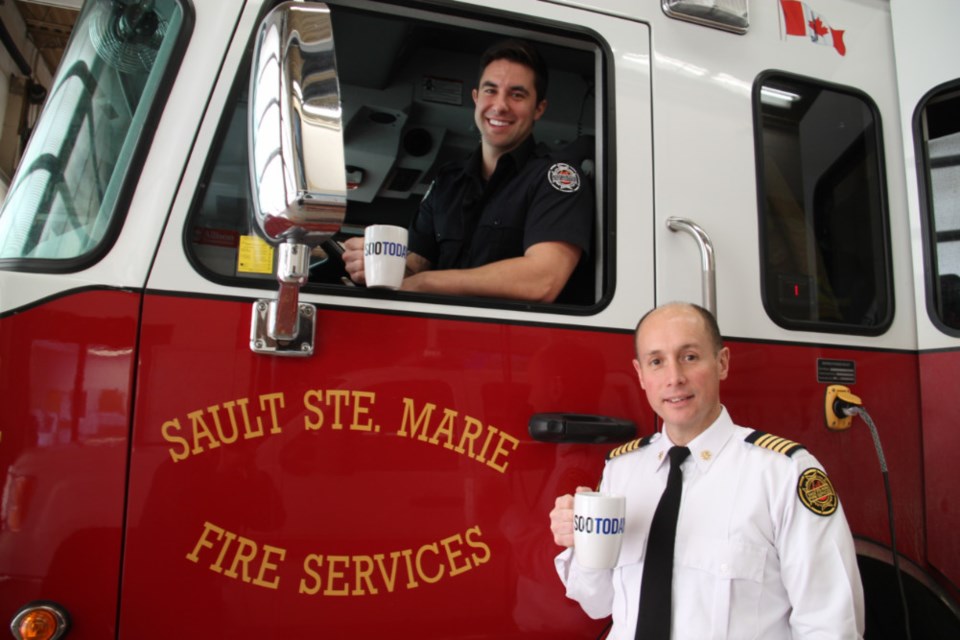 Each of our Sault firefighters will tell you what inspired him to become involved in such a noble yet dangerous profession, but Peter Johnson, Sault Fire Services chief, has an especially moving story.

“It was before I was born. My dad’s father, my grandfather, died in a fire in their house,” Johnson told SooToday.

“My dad always spoke about that night, and it always stood out to me, as a young man growing up, how my Dad spoke of the firefighters that were at the fire that night, how hard they worked, the efforts they made to save his dad, and he always held those firefighters in high regard.”

“It just stuck with me on how it impacted him. Even though it was an unfortunate outcome, he still knew they did everything they could to save his dad, and I just thought ‘I’d like to be able to have that impact on someone like it did on my dad',” Johnson said.

“I think, also, being on multiple sports teams in my childhood and young adult years, being a part of a team, it just fit to become part of a firefighting team...it’s a unique story. My dad was very proud I became a firefighter.”

Chief Johnson shared the compelling story with us as we visited Sault Fire Services Fire Station 1 at 72 Tancred St., dropping by with complimentary SooToday coffee mugs as a sign of our appreciation for a team which has been kept extraordinarily busy lately, with a series of especially devastating commercial and residential blazes.

Drawing on his memories of nearly 25 years as a firefighter, Johnson said “I’ve seen good and bad,” stating one of the most rewarding experiences he’s had was rescuing a fellow firefighter.

“It was at the scene of a house fire and one of our own firefighters got trapped in the basement.”

“I was at the top of the stairs, we were advancing into the basement and I noticed the hose stopped advancing. I gave it a few seconds, but it just seemed weird, the hose wasn’t moving, so I followed the hose down and I found our firefighter in a situation where he was tangled and trapped and couldn’t get free, so I got him out of it, got him upstairs and outside.”

“I was thankful I got to help him. That always stuck with me,” Johnson said, adding the firefighter was not injured.

“There are a lot of things you experience, but it’s the genuine thankfulness people give when you show up at the scene to help them...it’s a nice feeling you’re there and on someone’s worst day they’re having, you’re able to provide some type of help, small or large, and that to me is really rewarding about this career.”

Johnson said he recommends firefighting as a career “if you’re the type of individual who likes to work with your hands, be part of a team and likes to give back to the community.”

“It’s a lot of labour. You have to be resilient. You have to be able to cope, and you have to be open to change. We get a general idea of the types of calls we’re going to but the nature of them can change at a moment’s notice, anything can happen. You have to problem solve in a quick fashion.”

A Sault native, Johnson has been a Sault firefighter since 1995.

He began postsecondary studies in a Bachelor of Arts program at the University of Windsor, but, after one year, deciding to pursue a more hands-on career, switched over to the Detroit Fire Academy, then to the Lake Superior State University (LSSU) Bachelor of Science degree program, specializing in Fire Science.

“As a career firefighter, there’s always training. It’s one thing to study from books and know what the theories are but you have to be able to apply those theories in a practical sense at a fire scene.”

“I’m thankful for the opportunity the city’s provided me to be an employee here. It’s a great profession. Saut Fire Services has an excellent staff, from the new recruit to the person with 30 years experience,” Johnson said.

With that in mind, we also chatted with recent Sault Fire Services recruit Micky Sartoretto.

Like Chief Johnson, Sartoretto is a Sault native and earned his four-year Bachelor of Science degree, specializing in Fire Science, from Lake Superior State University (LSSU).

He was recruited by Sault Fire Services in February 2018.

“I love coming to work, the guys are great, every day is new and I embrace it.”

“I’ve always had a passion for helping others. There were some instances when I was a kid with some family medical calls and I was inspired by seeing emergency services coming to help out. I like being part of a team too, and that’s a big part of Fire Services is relying on each other, everybody pulling their weight.”

Is there a particular call which stands out in his memory as a recently hired Sault firefighter?

“There’ve definitely been some medical calls, keeping people alive and getting them to the hospital.”

“Getting off the truck at any call we go to still sends shivers up my spine. It is pressure, but that’s why I am here, that’s what I want to do. I love it,” Sartoretto said, adding he appreciates the guidance and advice provided by senior firefighters.

Sartoretto said he would recommend firefighting as a career.

“Absolutely. I coach hockey in town too, and a lot of the kids ask me questions at the rink. To me it’s the best job in the world and wouldn’t trade it for anything.”

Sault Fire Services personnel have recently been called to two devastating commercial fires, one on Queen Street East the other on Hudson Street

You can also check out the smiles Sault firefighters bring to the faces of children and parents during their Christmas season fire hall tour by clicking here.

Trending in What's Up Wednesday