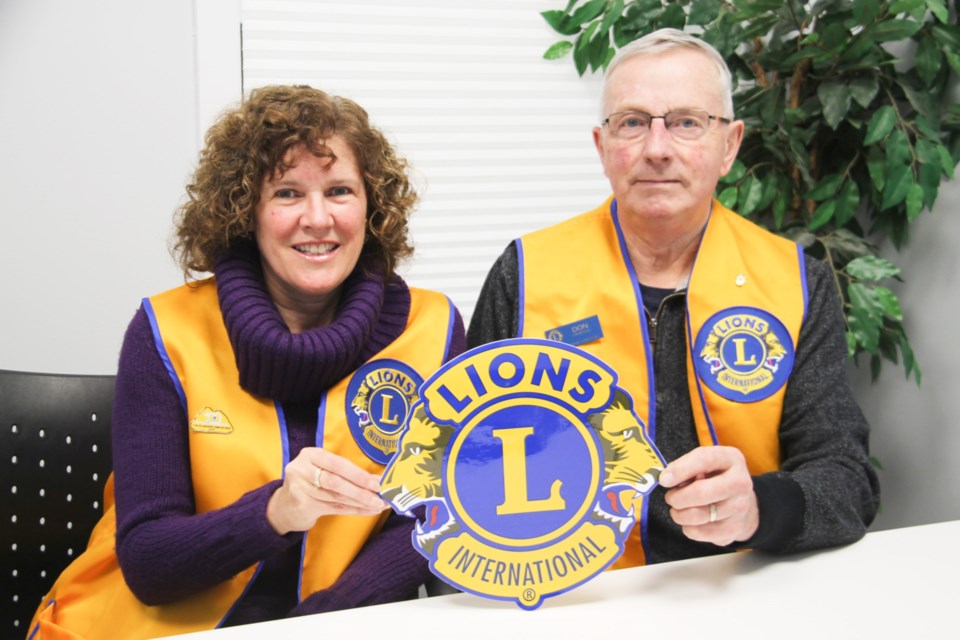 Established in Chicago in 1917, and now with 1.3 million members in approximately 45,000 local clubs in more than 200 countries, the Lions Club International is one of the largest service clubs in the world.

But the Lions Club of Sault Ste. Marie, established in 1936 with the help of the Sault, Mich. and Windsor, Ont. Lions Clubs, is down to 36 members and is eager to hear from community-minded men and women who wish to join the club.

‘Lions’ is an acronym for ‘Liberty, Intelligence, Our Nations Safety.’

“It would be nice for people in the community to come to us,” said Cheryl Pavoni, Lions Club of Sault Ste. Marie public relations committee chair, speaking to SooToday.

“We are definitely looking to recruit more members. We’re trying to get younger people involved, matching people’s skills with ways in which they can help us and the community.”

“The Lions Club is an organization that helps with the betterment of the community,” Cheryl said.

“It’s a very simple test, using a chart. If there are concerns we make a note of it, and the school will send a note home to the child’s parents and it’s up to them to take them to the optometrist of their choice and go from there.”

“We find about 25 per cent of the children need attention for their vision. We’ve never recommended any child for vision care who shouldn’t have gone for an appointment, so our tests are reliable,” Don said.

While caring for the wellbeing of children and youth, the local Lions Club has also supported the Sault Area Hospital Foundation (SAHF) over the years under a broader ‘health and welfare’ umbrella.

A recent addition to charitable events in which the Lions Club of Sault Ste. Marie takes part on an annual basis is the Walk for Dog Guides, held in cooperation with Pet Valu, a national fundraiser held to raise funds for the training of dog guides for those who are visually impaired, deaf or hard of hearing or have another physical disability, epilepsy, autism or type 1 diabetes.

“Normally it would cost $25,000 in total to get and train these dogs, but if people will pledge money we hold this walk at the Roberta Bondar Pavilion in May,” Cheryl said.

Now retired from her duties as Sault Area Hospital Foundation (SAHF) executive director, Cheryl joined the Lions with an eagerness to focus on public relations.

“It’s a way for me to give back, because the Lions Club supported me in my role when I was working for the Hospital Foundation. The Lions help the community, and health care is important to all of us. That encouraged me to join the club because I knew the Lions were doing something good, I could see where the donations were going and how they were being used efficiently.”

“There are no major strings attached (to becoming a member),” Don said.

“Some people like getting perfect attendance and this award and that award, but that’s not why I joined."

"We’re just looking for people who are reliable and interested in helping the community,” said Don, an Ontario Ministry of Transportation retiree.

“I like to give back to the community,” Don said, adding the looks on the faces of children the Lions have helped have made it all worth his while.

And even though it’s 2020, it needs to be added the Lions Club, like all other service clubs, are not ‘old boys clubs.’

“2018 was the first year a lady (Gudrun Yngvadottir) was our international president. She was from Iceland. A striking lady, but we couldn’t pronounce her name,” Don chuckled.

Those interested in checking the Lions out may do so by contacting Carol Russell, Lions Club of Sault Ste. Marie membership chair, at 705 946-2726 or by email

Prospective members are encouraged to attend a business meeting, a dinner meeting and take part in a Lions charitable activity to see if the club is for them.

“St. Vincent Place is incredibly appreciative of the donations we've received from the Lions Club of Sault Ste. Marie. Their generosity in supporting our shelter, food bank, and soup kitchen helps us to give hope to more than 3,000 individuals every year. The care and dedication to their community demonstrated by the Lions Club means so much to all of us here at St. Vincent Place,” wrote Sara McCleary, St. Vincent Place marketing and fundraising coordinator.

“Sault Area Hospital Foundation is grateful for the generosity of the Lions Club of Sault Ste. Marie. Over the past 40 years, local Lions have given more than $242,000 to our hospital. While their biggest undertaking was a $100,000 gift toward our ophthalmology department, their gifts have also supported surgical and inpatient programs at Sault Area Hospital. Our sincere thanks to the Lions, on behalf of all the patients their gifts have helped. Their contributions have made a significant impact on care for our community,” wrote Giselle Chiarello, SAHF major gifts/planned giving officer.

‘This place is a gem,’ says college’s athletics manager (9 photos)
Feb 5, 2020 2:07 PM
Comments
We welcome your feedback and encourage you to share your thoughts on this story. We ask that you be respectful of others and their points of view, refrain from personal attacks and stay on topic. To learn about our commenting policies and how we moderate, please read our Community Guidelines.