Check out Findlay’s Fungus. It’s good for your health

Findlay’s Fungus, a Mill Market vendor specializing in mushrooms, is the subject of this week’s Mid-Week Mugging
Sep 5, 2018 10:00 AM By: Darren Taylor 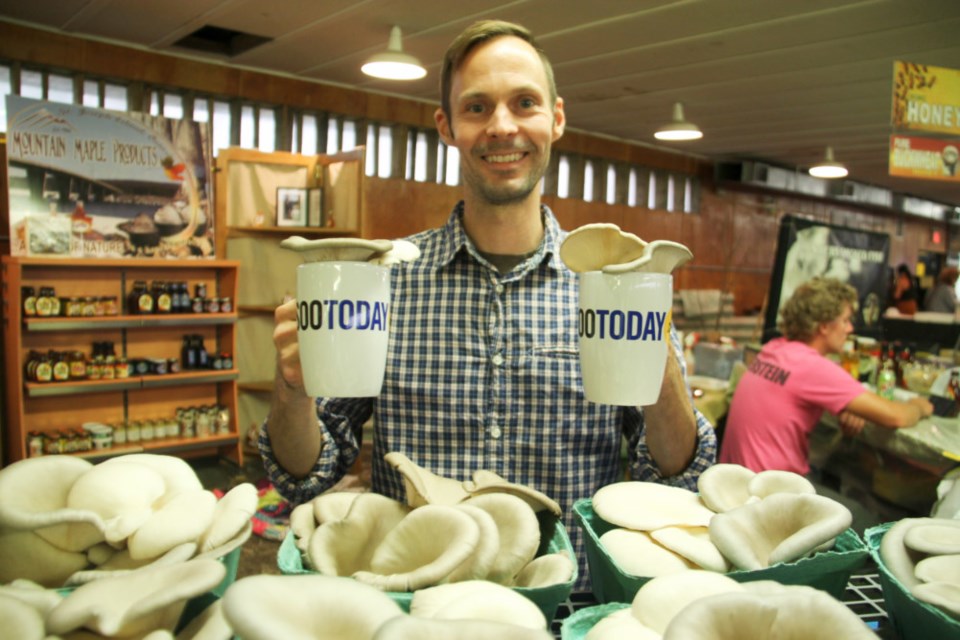 What began as an interest has become a full-time occupation for John Findlay, a local farmer and Mill Market vendor who specializes in mushrooms, running his own business known as Findlay’s Fungus.

He can be found at the Findlay’s Fungus location at Mill Market Saturdays and, eventually, he hopes, Wednesdays as well.

SooToday dropped in to Mill Market to visit with a pair of complimentary SooToday coffee mugs, Findlay’s Fungus the subject of this week’s SooToday Midweek Mugging.

However, a lot of people need to get over ‘mycophobia’ (a fear of mushrooms), he emphasized.

“People are so used to the common mushrooms, so that they don’t know about any other mushrooms.”

John said he is focusing on wood-loving species of mushrooms, which he describes as “a variety of gourmet and medicinal mushrooms.”

He grows his mushrooms indoors, at a Heyden facility.

“I’ve actually renovated a building to have a laboratory, an incubation space and fruiting room... all these mushrooms you see here have been grown from a test tube, on to a Petri dish, a grain jar, then a spawn bag, then a fruiting bag, then once colonized they’ll go into a fruiting room,” John said, enthusiastically explaining the whole process.

“The oyster mushrooms have certain medicinal qualities that are cholesterol-reducing, anti-tumour, and they’re really good for general immunity. My shiitake mushrooms which I’m just starting to grow have anti-cancer, anti-tumour properties, and as I work on other varieties like lion’s mane and reishi mushrooms, we’re going to get into some more serious medical benefits to eating these.”

“It’s not a magic pill by any means, but they are really good for you,” John said.

He said mushrooms can play a role in preventing cancer, diabetes management, heart health, the immune system and weight management.

“I personally have only found one cluster of oyster mushrooms in three years of hunting in the Sault and area, and the bugs got to it before I did so I wasn’t able to enjoy any of them, so that’s why I’m really happy I’m able to offer these wood-loving species that maybe people aren’t able to get out and pick anymore, and enjoy the taste and benefits of having them in their diet.”

“This is important to me because I really wanted to take part in this young farmer movement,” John said.

“With a plant-based diet now becoming a bigger thing, a lot of people are looking for an alternative to meats, and the mushroom is probably the best one out there,” John stated.

John was born and raised in Sault Ste. Marie, and returned to his hometown after spending a decade working as an aircraft mechanic with the Royal Canadian Air Force (RCAF), travelling throughout Canada, the U.S., Dubai and Afghanistan.

“I was listening to the Podcast world and found out I would have to find a niche in Sault Ste. Marie that nobody had taken, and also something that would resonate with me personally, and I found mushrooms to be that market.”

Findlay’s Fungus videos are also available for viewing on YouTube