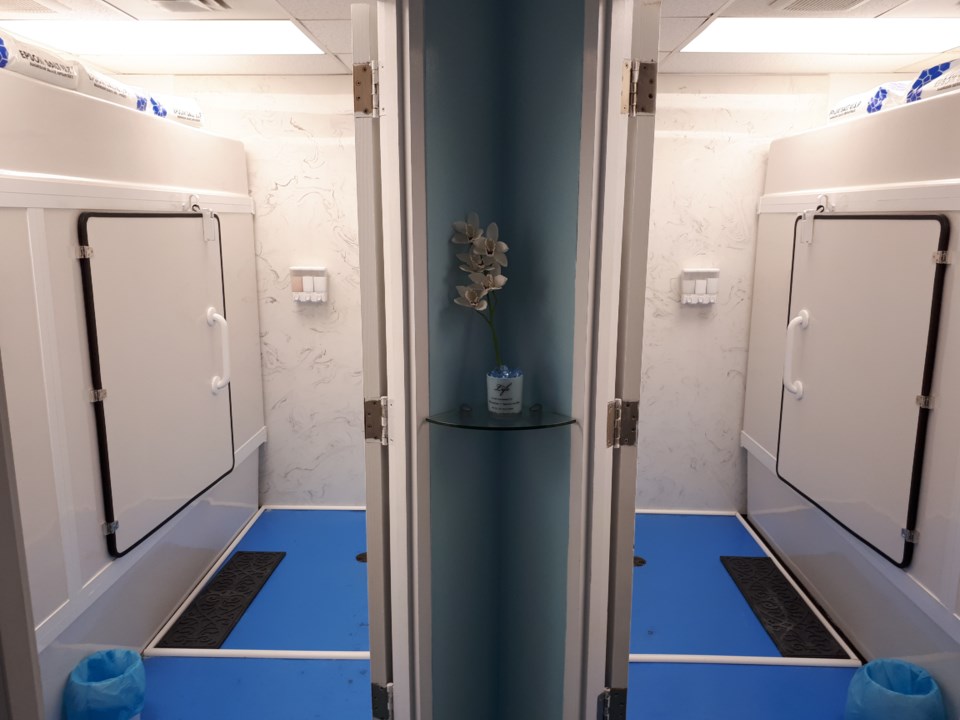 How many of us have described our state of existence as “being weighed down” or “carrying too much”? Maybe there’s something almost intuitive about the healing possibilities of weightlessness – of having the burden completely lifted – if only for an hour.

The local owners of InSPAration Float Centre on Great Northern Road, Brian and Stacey Lampe, both used to have managerial careers in military, banking, and policing. But it wasn’t until Stacey had what she describes as a “catastrophic failure of her surgical spine” that she discovered floating.

Brian explains, “My wife suffers from degenerative disk disease. Her discs actually blew apart and there was a pinching action that she just couldn’t get rid of. Since 2010, she had been on a cocktail of painkillers – but she just couldn’t lead a normal life.”

It wasn’t until after a float in 2016 that she acquired a deep sense of pain relief and well-being.

“And it seemed to last for days,” he said. “It was truly like a miracle – and that’s when we had our lightbulb moment.”

The couple says that they realized there had to be other people out there who would need the same services in the Sault. In 2017, they completed their market research and began a business plan with support from the local Community Development Corporation (CDC).

So how does it work? Each float cabin contains 1,100 pounds of magnesium sulfate (Epsom salt) which is the solution that allows people to float (as you might imagine it’s like to float in space) and creates the anti-inflammatory effect from the absorption of magnesium.

“Absorption through the skin is one of the best ways to get this essential nutrient,” says Brian. “So why not get it in one of the most relaxing ways possible.”

The extreme relaxation helps “turn off your production of cortisol – the stress hormone,” says Brian, and activates the “opposite of the fight or flight response – your parasympathetic system.”

When the parasympathetic nervous system is tapped into – such as through deep abdominal breathing – the heart rate slows and your body switches into a mode of restfulness. Akin to meditation, experiencing this state for a period of time in a floating tank can have a profound effect – both physically and psychologically.

“We have many doctors, psychotherapists, and psychologists send clients to us because of its profound effect,” says Brian.

Unlike many floating centres that deprive the client of all sensory stimulation, InSPAration provides it as one of their options.

“You can adjust your lighting and even leave the door open if you want,” says Brian.

There are also different sound options, but the most popular request is the ‘sound bath’, a ringing of crystal bowls used in zen buddhism.

“Each sound from the crystal bowl is supposed to align with the chakras in your body – and the bowls will ring at different frequencies for different intervals.”

“Though we are still battling many misconceptions out there – like people worry they have to close the door to the room,” says Brian.

He invites people to come for a tour and see their powerful water filtration system which he says ensures a ultra-clean, sanitary environment for each client.

“Words really fail to describe the experience,” laughs Brian. “You really just have to check it out for yourself.”