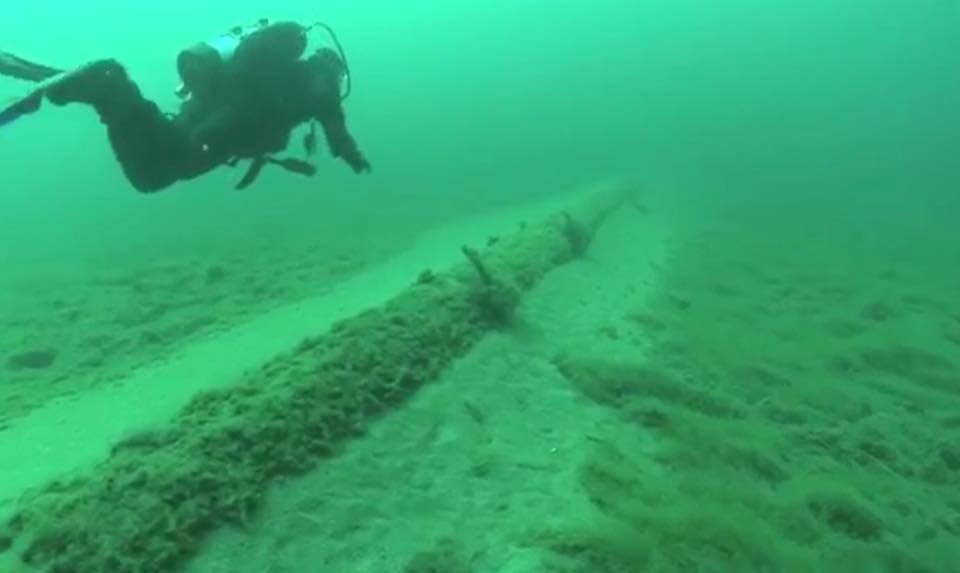 Still from 2013 National Wildlife Federation video of Enbridge Inc.'s Line 5 pipeline under the Straits of Mackinac

TRAVERSE CITY, Mich. — Michigan Gov. Gretchen Whitmer took legal action Friday to shut down a pipeline that carries oil beneath a channel that links two of the Great Lakes.

Whitmer's office notified the Canadian company that it was revoking an easement granted in 1953 to extend a roughly 4-mile (6.) section of the pipeline through the Straits of Mackinac. The revocation will take effect within 180 days, at which point the flow of oil must stop.

The Democratic governor's legal counsel said in a letter to Enbridge that the revocation resulted from “a violation of the public trust doctrine” and “a longstanding, persistent pattern of noncompliance with easement conditions and the standard of due care.”

“Enbridge has routinely refused to take action to protect our Great Lakes and the millions of Americans who depend on them for clean drinking water and good jobs,” Whitmer said in a statement. "They have repeatedly violated the terms of the 1953 easement by ignoring structural problems that put our Great Lakes and our families at risk.

"Most importantly, Enbridge has imposed on the people of Michigan an unacceptable risk of a catastrophic oil spill in the Great Lakes that could devastate our economy and way of life. That’s why we’re taking action now, and why I will continue to hold accountable anyone who threatens our Great Lakes and fresh water.”

Michigan Attorney General Dana Nessel said she filed a lawsuit Friday to carry out Whitmer's decision and shut down the line, saying the actions show that “Line 5 poses a great risk to our state, and it must be removed from our public waterways.”

Enbridge did not immediately respond to a request for comment.

The move escalates a multiyear battle over Line 5, which is part of Enbridge's Lakehead network of pipelines that carries oil from western Canada to refineries in the U.S. and Ontario. The pipeline carries about 23 million gallons (87 million ) of oil and natural gas liquids daily between Superior, Wisconsin, and Sarnia, Ontario.

The company says the underwater segment is in good condition has never leaked. Environmental groups contend it's vulnerable to a rupture that would devastate portions of Lake Huron and Lake Michigan.

Enbridge reached an agreement with then-Gov. Rick Snyder, a Republican, in 2018 to replace the underwater segment with a new pipe that would be housed in a tunnel to be drilled through bedrock beneath the Straits of Mackinac.

The company is seeking state and federal permits for the project, which is not affected by Whitmer's shutdown order regarding the existing pipeline.