Veteran referee turns his attention to the next generation

Dan Raycroft has a lifetime of memories, but keeps in the game by mentoring up and coming refs
Dec 31, 2019 12:30 PM By: Bill Montague 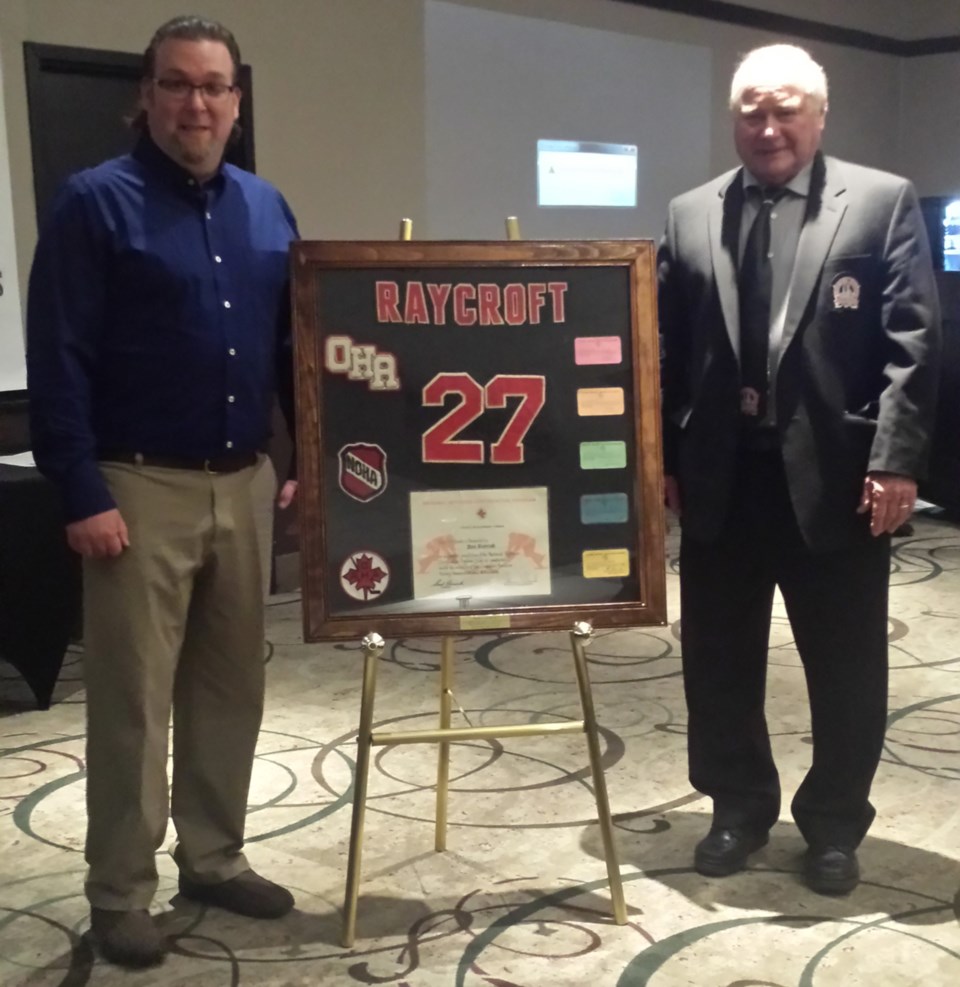 Scott Raycroft (left) and his father, Dan, are pictured with a board recognizing Dan for 50 years service to the Northern Ontario Hockey Association. Photo supplied

It was 54 years ago that Dan Raycroft first put on the zebra-striped jersey, but he remembers the impetus for that day as if it were yesterday.

It was 1965 and a much younger, more energetic Raycroft was hanging out with a friend of his when the dare began. It was a simple question, but the answer left a lingering impact.

“It was many many years ago,” said Raycroft. “A friend of mine (Dan Oliver) asked me if I could skate and I said yeah and he said ‘Do you want to referee?’ and I said 'Sure I’ll try it,' and that’s when it all began.

“It was so much fun and I was fortunate to achieve the levels I attained.”

What started out as a basic question developed into a love affair with officiating. Even today, as he enters the stretch run of a life of volunteering, Raycroft remains active in officiating, spending countless hours in cold arenas, grading young officials and mentoring them on the dos and don’ts of such a thankless job.

He does it because of his love for the game and his desire to make sure that today’s up-and-coming officials are getting the proper instruction to hone their skills.

And who else to learn from than Raycroft? He has been around the sport as an official for more than five decades. He has served such roles as referee in chief locally; he has been on the Northern Ontario Hockey Association’s board and was referee in chief of NOHA for one year.

He has officiated in the OHL, NCAA and he’s done semi-pro games in the States. During his officiating days, he reached Level 6 status, which qualified him to officiate at the international level, including the World Juniors, although he never did do one of those tournaments.

He officially put the whistle away in 2010 and now concentrates on mentorship and helping to develop today’s young officials.

“I like to see the young kids improve,” said Raycroft, whose wife Jill was the scheduler for many years. “I just want to guide and steer them to where they should be. I honestly get enjoyment out of this. It’s so much fun to go to the rink and be involved with these young kids that wanted to improve.”

And what does he look for?

Well, for Raycroft, officiating is a craft. It’s about being in the right position and understanding situations. It’s about communicating with coaches and managers and learning how to deal with unruly fans.

“I look to see if they’re (young officials) positioned properly to be able to make the right calls,” he said. “For me, it’s ‘Did you make the call and if you did, were you in the right spot?’

“For me, it’s critical to make sure these kids are positioning themselves properly to make the right calls.”

He recently spent a full day analyzing close to 16 officials at the John Rhodes Community Centre, GLF Memorial Gardens and the Soo Pee Wee Arena. He said he meets with all of them afterwards to go over ways in which to improve.

The game has changed a lot over the years and while referees still have to develop a thick skin, he said fan abuse or catcalls from the stands aren’t as nasty as they once were.

“It’s a different world today,” Raycroft said. “The kids don’t take a lot of guff from anybody anymore. In my day you had to have thicker skin, but not today, but society has a lot to do with that.

“You can’t say anything to anybody anymore without going to jail.”

For Raycroft, there are far too many memories to pick and choose the best, but he does remember it was a pleasure doing games back in the days when Wayne Gretzky donned the Greyhounds’ red-and-white.

“I had the pleasure of doing Wayne Gretzky’s first game in the Sault,” said Raycroft, who is a member of the Sault Ste. Marie Hockey Hall of Fame. “He was pretty elusive on the ice. I watched them try and get him in the corners and nail him down, but they couldn’t get him. He was good to watch.”

Another major highlight of his was the night he got to officiate a game with his son, Scott, and grandson, Paul doing the line.

Turn the subject to coaches and Raycroft starts to laugh. There were many colourful ones, he said, but none as memorable as the legendary Murray 'Muzz' MacPherson, whose rock-em sock-em style made for many interesting nights.

“Muzz MacPherson without a doubt was the biggest character I have come across,” Raycroft said. “You had a lot of fun with him, but boy you had to be on your toes. The team he had in the Sault was wild. They loved to fight and there was always a scrum and you just knew they were going to get into it.”

While Raycroft’s love of the game will never wane, he said a lot has changed, some for the better, some for the worse. The physicality is almost completely gone and the game is more one of skill than brawn.

“There’s a lot that goes on today but once the whistle blows, everybody backs off,” he said.  “Back in the day they kept coming and you got popped in the nose. It’s a different game now. The rules have changed and they’ve taken the emotion out of it, you know, the real rough stuff.

“Even in the NHL, when the whistle blows, everybody stops.”