Two peas in a pod: Anne and Marilyn a constant around local hockey arenas

Friends and sisters in law, the pair have been making the Hounds media room a special place for close to 25 years
Jan 12, 2020 3:00 PM By: Bill Montague 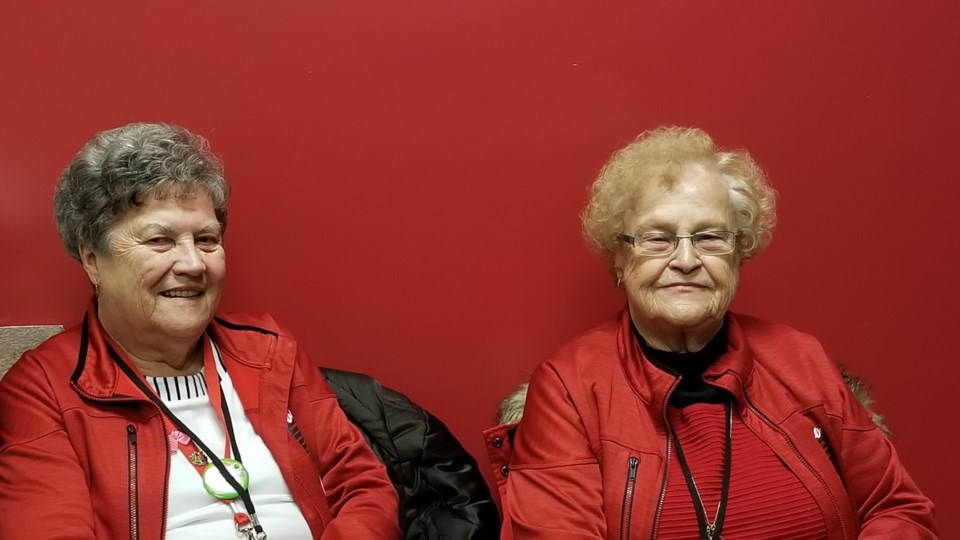 When you walk into the press room at the GFL Memorial Gardens, your eyes are immediately drawn to two elderly women who sit inconspicuously in the far left corner.

They are quiet and polite and they typically greet those that enter the room with a seven-word sentence that goes something like this: “Would you like a bowl of soup?”

It is a sentence they’ve been uttering for close to 25 years now and for sisters-in-law Anne Varcoe and Marilyn Schmidt, those who frequent that room will tell you things wouldn’t be the same without them.

Like snow in the winter in Sault Ste. Marie or those nasty potholes in the spring, Varcoe and Schmidt have been a constant around local arenas, not only serving as press room attendants at Greyhound games, but also as front door attendants at Soo Thunderbirds games where they handle the tickets and souvenir booth.

“It’s great doing that stuff,” said Schmidt, now 77. “We get to meet different people and we get to know a lot of the parents of the T-Birds players and they’re all very nice and treat us with respect.

“We were joking with someone in the Greyhounds’ press room recently and he said when we die they’re going to put our ashes up on the shelf.”

For Varcoe, being around a hockey arena or watching the sport on TV has been a lifelong hobby. Her late husband Forrest (Fordy) Varcoe, who was Marilyn’s brother, was an assistant trainer for the Greyhounds under John Mayne and later served as a trainer for the Thunderbirds. Fordy passed in 2002 after a short bout with cancer, but that wasn’t about to stop Anne from doing what she loves and staying busy.

“It’s something you do,” Anne said. “You know, it keeps you involved and keeps you young. It’s great. You meet people, you talk to people, you know what it’s like.”

For Anne, hockey has been a part of her life for what seems like an eternity. Her and Fordy were landparents to 15 different players over the years, with three of her favourties being Ralph Intranuovo, Perry Pappas and Tom MacDonald, all of whom played on the Hounds’ 1992-93 Memorial Cup championship team.

“Perry, Tom and Ralphie were great,” Anne said. “We had so much fun. When they weren’t in school and The Price is Right was on, they’d all come and sit in the front room and we’d guess the prices, but I had to write theirs down because they’d cheat. If they won, they’d get a special treat.

“I never had any problems with any of them and like I told all of them, the team has its rules, I have mine.”

She and Fordy were also very close to former Hounds star Joe Thornton, who spent a lot of time at their house and playing pranks on Fordy during those long Greyhounds bus trips.

Marilyn also lost her husband, Joe, in 1996 so today, more than ever, Marilyn and Anne are like each others shadow. If they’re not at a Hounds game or T-Birds game, they can be found at a Casino or volunteering somewhere.

Marilyn also volunteers at the Sault Area Hospital every second Monday and occasionally at the FJ Davey Home.

And despite their increased age - Anne is going to be 80 this year - both ladies still routinely do their own driveways in the winter, something they say keep them active and young.

“When Fordy first brough her (Anne) home (back in the 1950s), her and I became friends,” Marilyn said. “She has one child, I have three and they grew up together. We don’t live too far apart so we’ve always been close.”

At the Greyhound games, the ladies are responsible for the food that’s supplied to scouts, media and team staff. They make sure the area is clean and the food is hot and take care of the dishes by game’s end.

For both, it’s a night out, a way to kill time and socialize with the young and old. Many over the years have said the Hounds’ press room is among the best in the league, something both Varcoe and Schmidt take pride in.

“You have to keep pushing yourself,” Anne said. “I still do most of my own yard work, including shoveling in the winter and so does Marilyn.”

For some reason, that isn’t hard to believe. These two have a spirit about them that is infectious and both believe the key to staying young is staying active.

“I guess we’ll retire together or when they don’t want us anymore they’ll let us know,” said Marilyn.

For those that have attended Hounds games over the years, it’s hard to imagine that room without Varcoe and Schmidt. They are two peas in a pod and their absence would be a huge void and would surely be felt.