The Tom Annett factor: How the Korah Colts have stayed on top

In the debut edition of Pursuit, Bill Montague delves into the methods and the dedication that have allowed Korah's head coach to build a seemingly unstoppable team
Oct 31, 2019 12:30 PM By: Bill Montague 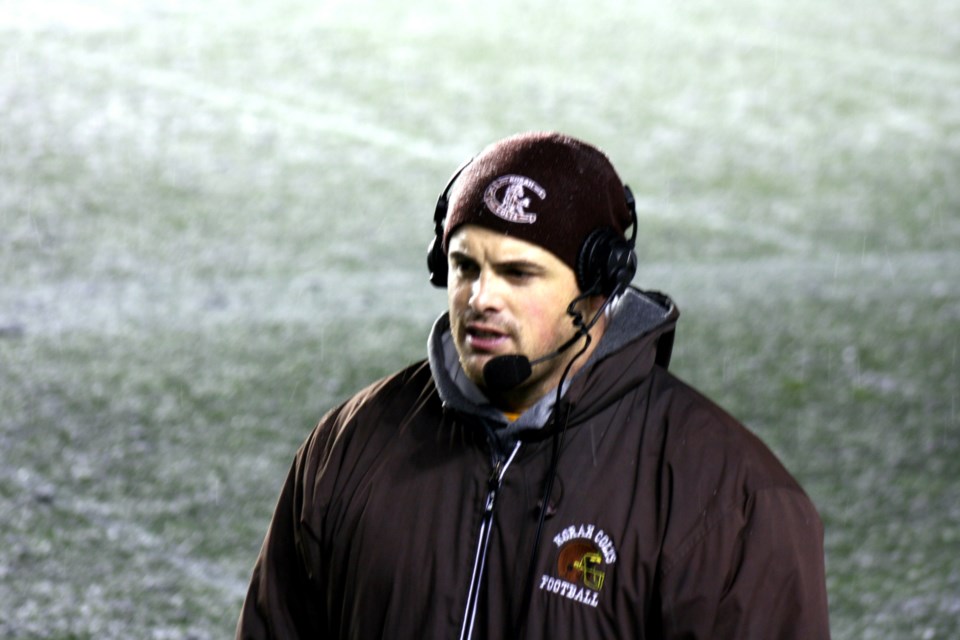 As Tom Annett makes his way up and down the Korah Colts sideline, one of the first things you notice about him is his six-foot-two, 260-pound frame. He is an imposing figure for a high school football coach and his thick neck, muscular legs and barrel chest are evidence of all the hard work he’s put in over the years.

But now 40 years old with two young girls, Annett is no longer delivering punishing hits as a middle linebacker and is instead a hit as one of the North’s brightest football minds. His Korah Colts senior boys football team just won its third consecutive city championship with a 42-3 win over the St. Mary’s Knights and are now the measuring stick that all other teams use to gauge success.

As the Colts prepare for the Northern Ontario Secondary Schools Associating championship Nov. 9 on the road against either North Bay or Sudbury, there is no denying that Annett has supplanted former Knights head coach Marty Smith as the dean of local coaches.

How does he do it, you wonder? He studies film, he preaches technique, he stresses physical fitness, he prepares his team for battle and he demands that those he works with are as committed toward excellence as he is. With Tom Annett, you are either all in or you are out.

“We really doubled down four years ago,” said Annett, whose team won the Ontario Federation of School Athletic Associations title a year ago wth a 45-12 win over St. Peter from Ottawa. “We almost had like an epiphany the way we do things. We really focus more on leadership, we got our players involved and gave them some ownership and we created some program core values. They picked them (the core values). They were commitment, compete, toughness, teamwork and family . . . We use those five core values to really teach a lot of other core values.”

Since hanging up the cleats during his fifth year of university due to a fractured vertebrae while playing for the University of Laurier, Annett knew he wanted to coach football. He was bred for it and he wanted to give back to a sport that has taught him so much. He insists that his success today is a byproduct of a litany of coaches who mentored him over the years, including Ken White and Bill Paul, both of whom coached him football at Sir James Dunn, along with former SJD basketball coach Dick Joy. He also played two seasons at the University of Windsor before transferring to Laurier.

“I knew for a really long time that I wanted to coach,” said Annett, now in his ninth year of teaching (geography and phys-ed) at Korah. “I was blessed with really good coaches, starting with hockey and basketball locally and my football coaches in high school and university were excellent.

“They were all big influences in my life. My father (Richard) coached basketball and football at Sir James Dunn and a lot of family on my mother’s (Patricia) side also coached sports.”

From the day he stepped onto the local scene Annett has done nothing but win. He transformed the former Sir James Dunn Eagles into a power, winning a city title in 2009 and he has now won three consecutive titles with the Colts. He runs his program like a pro environment, holding players accountable for their fitness, practice habits and off-field conduct. He said this year’s team isn’t necessarily the biggest, but his players are by far the strongest, thanks to a physical-fitness program that basically runs from February until football season. Players work out in the weight room twice a week and that year-long commitment has produced excellent results when it comes to strength training.

“It’s not Xs and Os that win championships, but execution and great players,” said Annett, who is also a distant cousin of the late Tom Tipton. “We preach multi-sport athletes at this school but what really separates us from other schools is our strength and conditioning program.

“We’re not always the biggest team, but physically I think most would agree we’re the strongest team on the field.”

As a coach, Annett is not the man he was when he first started out coaching some 12 years ago. Kids have changed, he said, and with that so too has his approach. He is still fiercely intense and demanding, but he has come to realize that part of getting kids to buy into the program, is building relationships with them.

“It’s always changing and adapting,” he said of coaching. “I think experience is one of the most important things. The way I coach now is not the way I coached when I started. Now it’s more about developing relationships with kids, finding out what makes them tick, getting to know them on a personal level.

“They don’t care what you know until they know that you care about them.”

And Tom Annett, despite his imposing and oft-times intimidating presence, has done an excellent job balancing business with pleasure and gaining the respect of his players.

And with that comes results!