Now coach of the Sault College Cougars, Hall sometimes wonders what could have been if given the chance at the next level
Jan 24, 2020 4:30 PM By: Bill Montague 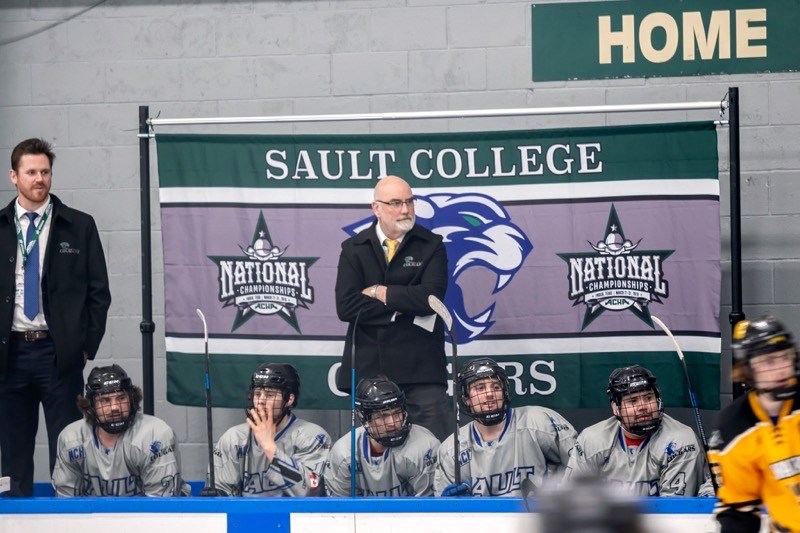 If you talk hockey long enough with Mike Hall, the question is eventually inevitable. It is like the elephant in the room and even a man of Hall’s experience and savvy knows that eventually those that have followed his career want to know ‘why.’

Like why at age 55 and with so much success on his resume, has he never been granted an opportunity to coach or assist at the next level? Here is a man who has coached midget hockey for 19 years, many of them highly successful ones, yet not one sniff from an Ontario Hockey League team. He even once applied for an assistant coaching job with the Soo Greyhounds when Dave Mayville was GM, but his resume was not even acknowledged.

For a man as fiercely competitive and committed as Hall, the answer to that question may haunt him forever, but deep down he knows that life is all about opportunities. Sometimes you get them. Sometimes you don’t.

“Everybody has aspirations of coaching at a higher level,” says Hall, who is now the head coach of the Sault College Cougars men’s hockey team, which sports a 17-3-2 record in American Collegiate Hockey Association Central Division 2 play. “I’ll be 55 this year so I suppose the opportunity has passed me by, but you never know. I applied for a job with the Hounds once but never got an interview. A big part of coaching is the right place, right time, right people.

“It’s just getting the chance and sometimes you get it, sometimes you don’t, but I’m enjoying what I’m doing at the college level so I guess you can say I’ve been fortunate.”

Make no mistake about it. The real fortunate ones have been those young men that have benefitted from Hall’s tutelage. He has coached hockey for close to 30 years and after a short hiatus, he’s back behind the bench, this time guiding the Cougars to the so-called Promised Land.

Last year, with Hall as head coach, Sault College became the first Canadian team to ever win the American Collegiate Hockey Association Division 3 title with a 12-3 thumping of Grand Valley State University. This weekend, the Cougars, who now play Division II are home to Michigan Tech University, tonight at 7 p.m. at the Rankin Arena and Saturday at 12 p.m., also at the Rankin.

“The whole college thing kind of intrigued me,” said Hall, who is now in his third year as head coach of the Cougars. “I had people ask me why I went back, you know, because of a new program, the pains you have to go through, but I saw that as a huge challenge. I liked the opportunity to work with the school and start a new program from the ground up.

“The biggest thing now is that the kids who have finished at the NOJHL (Northern Ontario Junior Hockey League) level, but who aren’t quite finished playing hockey, well, this gives them - especially the local kids - a chance to keep playing.”

And for as instrumental as Hall has been in the Cougars success, he says the real credit has to go to manager of hockey operations Mark Hebert, assistant coaches Rod Trudel and Tyler Brown and, of course, the players.

Hebert, who has worked tirelessly to transform the Cougars program into a winning one by convincing talented players to give Sault College a try, said when the chance came to add Hall as the head coach, there was really no decision to be made.

“Mike’s the kind of coach that brings an awful lot to the table,” said Hebert. “Not only does he have several years of experience coaching at many different levels, but he has always been considered a players coach. Players often like playing for him because he’s always trying to make it better for the team and the players.”

That is something Hebert witnessed first hand when his son, Nathan, played midget hockey for Hall during his Sault North Stars days.

“Mike never puts himself first and is always trying to do what’s best to improve it for the players and the team,” Hebert said. “My son was lucky enough to play for Mike for two years and to this day my son considers him to be one of the best coaches he’s ever had.”

While Hall treasures his time spent coaching minor hockey, he says there’s a definite difference coaching older players, many of whom are working toward a future career outside of hockey.

“The game has definitely changed,” he said. “The players have changed and the nice part about coaching men is that they’re not as sensitive as the younger kids.”

He now believes in more of a “puck possession” game and most of his focus with the Cougars is spent teaching defensive-zone coverage.

Throughout his coaching career, Hall has always been a man who has been adept at balancing discipline with care and concern. He is intense and dedicated and the look on his face often signals a no-nonsense approach to those he has coached. They know he’s the boss and as a player, you better don the hard hat when you punch the clock and report to Mike Hall’s place of employment.

“I was always a strong believer that you can’t ask hockey players to be committed if you’re not committed yourself,” Hall said. “You have to have both feet in all the time. That’s how I’ve coached. If you’re committed, your players will be committed and that’s always been a big part of it.”

While some have said he can be an imposing and intimidating figure behind the bench, Hall chuckles and said he prefers the word “demanding.”

“I wouldn’t use the word intimidating as much as demanding,” he said. “There’s certain things you can do as a player but there’s other things we won’t accept and one of them is lack of commitment to the team. It’s not every day in sport that you’ll do a great at it, but I’ve never met a player that puts the equipment on and says ‘I want to go out and lose today.’”

Talk to those that know Hall best, and they will tell you he genuinely cares about his players. He talks of how proud he is of Steven Noble, who played midget hockey for him before going onto Notre Dame where he posted a 4.0 grade-point average and captained the team.

But then, in the next breath, he talks about the personal struggles some endure and pointed to former Legion goaltender Gene Chiarello, who played four years in the OHL for the London Knights. Chiarello was diagnosed with brain cancer in his early 20s and eventually beat it and is now married with three kids and is a lawyer in London.

“Think of all the adversity Gene Paul Chiarello faced and he came out stronger on the other side,” Hall said. “I look up to Gene Paul with everything he’s gone through and done in his life. That was probably one of the proudest moments for me. It wasn’t winning the national title, but listening to Gene Paul speak of everything he went through when he was the guest speaker at the All Ontario’s at the Canadian Bushplane Heritage Centre (in 2013).

“They (the players) listened to every word he had to say, the battles, the struggles and everything he went through with his health. It was a great day to sit there and say I had an opportunity to coach a young fella like that. You like to think you had a small input into his development.”

While Hall doesn’t know how much longer he will coach, he said he takes comfort in the fact he’s played a role in putting the Cougars on the map.

“The biggest thing is how quickly the program has come together,” he said. “We were a first year ACHA Division 3 team last year and went all the way to a national championship. A lot of credit goes to the manager (Hebert) and the scouting staff for bringing in good players. We may have struggled early on, but now we’re getting calls daily form kids that want to come here.