Neil Ovey's love of soccer is rubbing off on the Sault 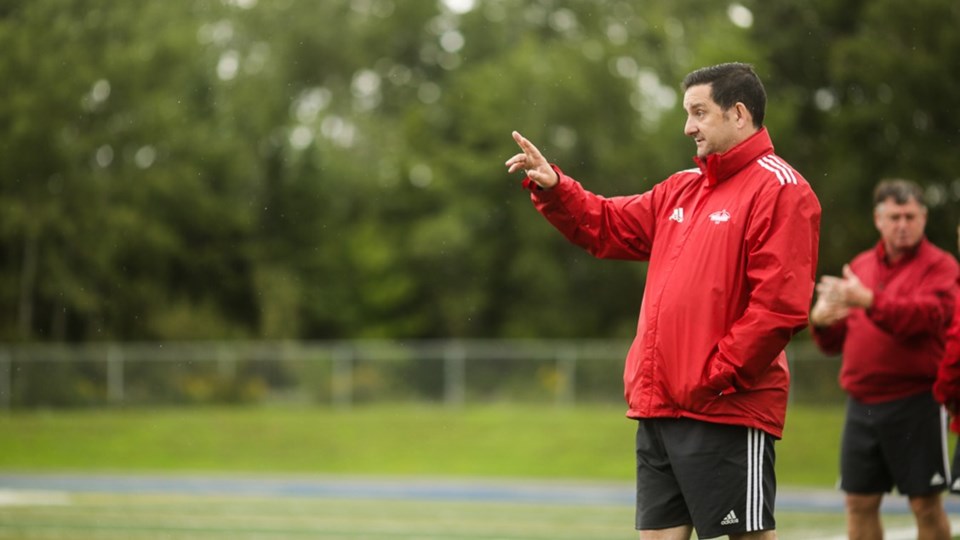 Neil Ovey knew from the moment he arrived in Sault Ste. Marie 13 years ago from England that his love for soccer wasn’t as passionate as most Northerners love for hockey and football.

It was a depressing reality for a man who grew up eating, breathing and sleeping soccer, but that hasn’t stopped the 51-year-old from trying to grow the sport locally.

“Soccer in England is equivalent to hockey over here,” said Ovey, who is the head coach of the men’s and women’s teams at Algoma University. “Soccer is the heartbeat of the country, but over here it’s on the back burner compared to traditional sports like football, hockey and baseball. Here, soccer was more viewed as a summer sport for the kids, you know, to keep them in shape, but it’s changing and I’m starting to see a lot more good talent here.”

Today, Ovey’s hard work and persistence is paying huge dividends and his ultimate goal of graduating players to post-secondary programs and beyond is coming more and more into focus.

He’s still in that so-called infancy stage, but at least there appears to be some light at the end of the tunnel.

And a big reason for that is Ovey, who brings impeccable credentials to Sault Ste. Marie and those that that have come to know him well, can’t help but take notice.

He is astute when it comes to the game of soccer and he has an uncanny ability to relay information to his athletes in a clear and simplistic way.

“His knowledge of the sport is second to none,” said Sault native Dan Scarpino, who has joined forces with Ovey at Algoma U and is highly involved in the Thunderbirds’ youth programs. “He’s played the game at incredibly high levels and he’s coached across Europe and England. He coached some rep level here and now varsity at Algoma and what he’s poured back into the game is remarkable.”

Ovey enjoyed a 25-year playing career in the UK, some at the semi professional level. He also coached semi pro at the Under-19 level before moving to the Sault in 2006. He has his Canadian National B coach’s license, which is one level below the National A Level, the highest a coach can achieve.

He quit his job at Pepsi in 2016 to pursue his first love and is gradually seeing some progress with the Algoma U men’s and women’s team. His women’s team won its firs ever OUA game this season with a 4-1 win over the Windsor Lancers.

But aside from the university level, Ovey is providing kids with another avenue to get top-notch coaching with the introduction of the Thunderbirds youth program. They have soccer camps for athletes in minis, juniors and seniors, as well as a goalkeeper camp.

They are also in the midst of creating a women’s U-14, U-16 and U-21 rep team, a great option for those kids who either did not make the Sault Civics program or who just want a change of scenery. His youth Academy is run by a parent committee and currently has 113 athletes enrolled in it.

“The goal is to get the kids submerged at a young age into soccer and into being around university and university students,” Ovey said. “As a program, we’re trying to have a positive impact on kids and we want them to know that they can come to university and play soccer.

“There’s no reason that just because we’re up in Sault Ste. Marie or Northern Ontario that we can’t produce players. One thing I know is we have some good athletes here, some great all-around athletes.”

Ovey said aside from Megan Girardi, a standout goalkeeper with the University of Western Mustangs, the Sault has fallen short when it comes to producing high-calibre soccer players and he’d love to see more kids pursue the game at the post-secondary level.

“She’s another great example for local kids,” he said. “Players from the Sault can go on and play for top programs like that . . . I would love to see more kids develop from a soccer perspective and make soccer their sport and to progress through the ranks whether that be with us or Soo United. The goal is to get kids to professional soccer somewhere whether that’s in Canada, the Premier League or in university.”

According to Scarpino, who grew up playing soccer in the Sault and who is now overseeing the Thunderbirds’ club teams, Ovey is a breath of fresh air for the soccer community. He is not driven by ego or self gratification and is instead fuelled by the desire to see kids improve and acquire a love for the game.

“Neil is able to get his message across, and it doesn’t matter if it’s at the varsity level or not, but he gets his message across in a direct way no matter the ideology, no matter the circumstances or the environment,” said Scarpino. “His ability to communicate with coaches and players is difficult to master and he’s got it down to a T.

“I’ve known Neil for eight years now and I’m still learning from him every single day, whether we’re talking professional soccer, our own teams, I’m still picking up so much from him and the way he sees the game is incredible.

“His ideas are innovative and he’s so good at explaining tactical ideologies and the way he wants his teams to play.”

For Ovey, the end game is simple. It isn’t so much about wins and losses – although those are important – but in a city that puts emphasis on hockey and football, he understands his goal is to plant the soccer seed and watch it grow. His programs focus on ball mastery, first touch, fitness and on getting the youth player comfortable with the ball on their feet.

And with that comfort, Ovey hopes the young player of today will grow up and fall in love with the sport and pursue it at higher levels.