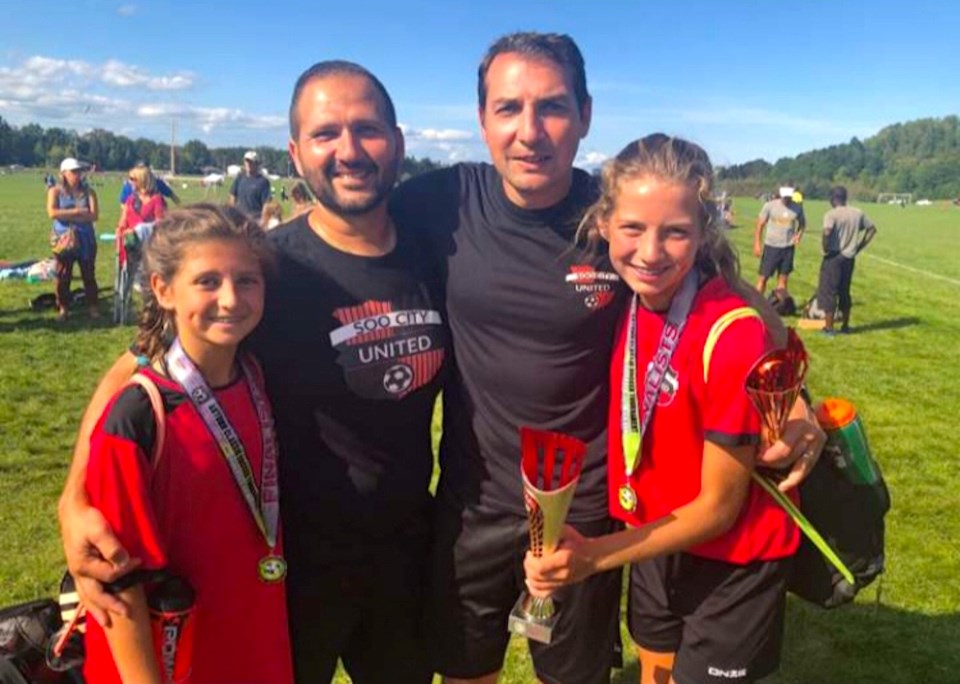 Simona Mazzuca (left to right), Steve Mazzuca, Mike Magli and Payton Magli. Photo supplied
If you talk to Steve Mazzuca long enough, you quickly learn the sky is the limit and there’s little you can’t achieve if you put your mind and heart into it.

The president of the Sault Youth Soccer League is driven by an unyielding desire to produce this city’s first provincial or national level soccer player and says achieving that goal all starts at the grassroots level.

“If you ask me, my primary objective as director of player development is to help produce for the first time in our city’s history a player on the national team," Mazzuca said. “We’ve never had one and I’d love to see someone from the Sault make a provincial team or get to the national level. I honestly believe that by having a strong grassroots program, we can get there one day.”

Aside from his role as president of SYSL, Mazzuca is also director of player development for the Sault’s competitive programs and is an assistant coach on the U-17 girls team and head coach of the U-14 girls Soo City United squad.

That means the 44-year-old logs a lot of hours on the field and in the office, but his passion for the sport and his quest to see the game grow is what keeps him motivated. He also has three kids that play the game — Samantha, 16, Simona, 14 and Sandro, 8.

He is obsessed with making sure players from the Sault reach their full potential and get an opportunity to play at the highest level possible, prompting him to help form an affiliation with the London Whitecaps, who play in the Ontario Development Provincial League, which is a stepping stone for players pursuing spots on the provincial and national team rosters.

“As developmental players, once you sign with that team it opens up gates for all developmental stuff the Whitecaps do,” Mazzuca said. “They can play up to 10 ODPL games for London and that’s great for their development.”

Mazzuca said the ODPL is the highest league a player can play in aside from competing for the provincial or national team.

Fata, a speedy and powerful forward, played in about five games last year and according to Mazzuca did exceptionally well, scoring in nearly every one of them.

“She’s an excellent player,” Mazzuca said. “They wanted her to try out for the team and move to London.”

“It’s exceptionally exciting to see those kids get to play at that level,” Mazzuca said. “Can you imagine if one of them ever made the national team. In soccer, that’s like making the NHL and it would be the first time in history anything like that ever happened to a Sault Ste. Marie player. It would be so great for our program. It would really elevate it.

“If it ever happened, I can honestly sit back one day and say all the time and effort I put into this paid off. I crave the idea of one day watching one of our former players play for Team Canada.”

Aside from growing the game, Mazzuca is also focused on growing as a coach. He’s a certified C licensed coach and is working on getting his national B license. He has completed phase one of that process and is working on the final stages.

But as he pursues that goal, his first objective is the kids. He runs junior development programs for kids as young as 7 and 8, primarily because he knows that a strong program hinges on the grassroots level.

He also wants to make Sault Ste. Marie a well-respected soccer hotbed in the North, something it’s becoming.

“If we look at comparables, we are more ahead of Sudbury, North Bay and Timmins when it comes to soccer and numbers and stuff like that,” Mazzuca said. “We’re one of the top programs in Northern Ontario based on numbers and our house-league numbers are far superior to a lot of other clubs.”

He said the Sault typically has about 1,200-1,300 players registered in its house-league programs. Today, due to COVID-19, there’s around 600 signed up on a what-if basis, but Mazzuca said the league will open registration up should the province give them the go-ahead. They are currently in Phase 1, working in small groups with the rep teams.

He said a lot of other centres in the province cancelled their rep programs altogether this season, but the Sault made a decision to offer some form of training, mainly to keep players interested and in the program.

“We questioned the idea of restarting and there were articles that said if we don’t offer something, we could lose a lot of players and some would either quit soccer or find other interests,” Mazzuca said. “Give them a year off and maybe these players don’t come back.  We wanted to make sure the 2021 season would still be strong and we felt if we didn’t offer something this season, 2021 would be broken down.”

And for as much as Mazzuca and others have helped build up soccer locally, the last thing they want to do is see COVID-19 tear it down.

“I really want to give a huge shout out to all the coaches and managers. If it weren’t for all their help, we would never be where we are today. They do so much work booking hotels and things like that. One of the biggest reasons our program is so good is because we have so many great volunteers in the community.”