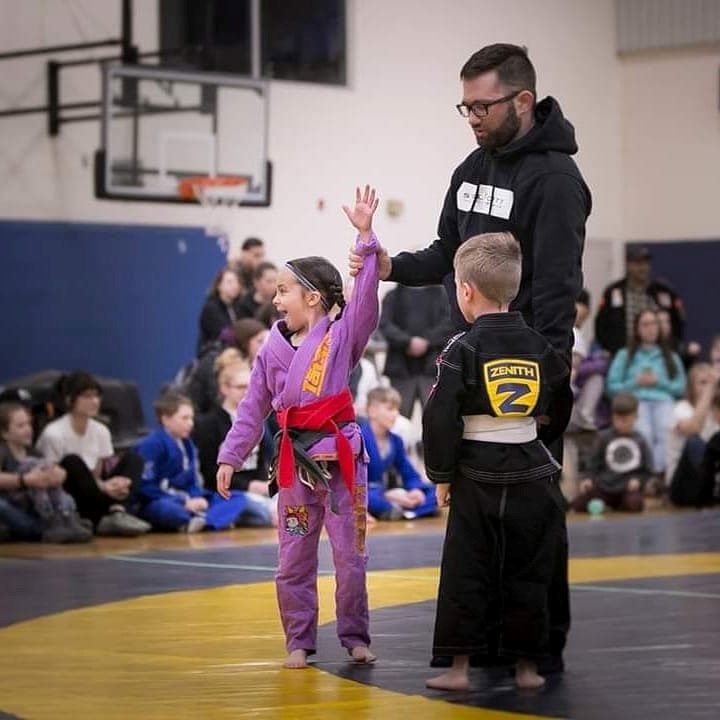 Brent Fryia is pictured with two of his young students

When you step into Brent Fryia’s 40x40 foot cushioned classroom, you better be prepared to work hard because in the world of mixed martial arts, ribbons and medals are not handed out to the undeserving.

Fryia, one of the best wrestlers Sault Ste. Marie has ever produced, continues to be an active member in the wrestling community, but this time instead of executing takedowns and pins, the 38-year-old is teaching others how to manoeuvre some of the sport’s finest moves.

His Steel City MMA club has come a long way since first opening its doors and for Fryia, it’s a way of giving back to the community and of trying to help other young kids reach the heights he once attained or to simply learn the art of self defence. His club focusses on disciplines such as wrestling, jiu jitsu, boxing and kick boxing.

And if ever there was an instructor adept at teaching such tactics, it is Fryia, whose resume is littered with medals after medals. He is a three-time Northern Ontario Secondary Schools Association champion and is a former bronze and silver medallist at OFSAA and was a bronze medallist at the national club championships.

During his university days at Lakehead, Fryia won three silver medals and a gold at the provincial championships and a bronze and silver at nationals. He was also a member of Lakehead’s 2002 wrestling team that was recently inducted into the Lakehead Hall of Fame.

But for Fryia, who also went on to sport an 8-4 record during a brief professional MMA career, it isn’t the medals that were most important to him. It is the life lessons. It’s the hard work, the so-called blood, sweat and tears. He said wrestling taught him that success can be earned by working hard and in a sport like wrestling, you have no one to blame but yourself for success and failure.

“If somebody said to me ‘Would you do it all again?' but you could never have any of the medals or accomplishments, I’d say yes, because it’s all about the camaraderie,” said Fryia, who also teaches English at Superior Heights Secondary School. “There’s a different type of camaraderie you get from one-on-one combat sports. It’s about what it makes people into. It’s not about all the success, but about who you become along the way.”

He said while some may construe martial arts as all about fighting, it is way more than that. It instills confidence in kids. It teaches them about work ethic and physical fitness and it preaches discipline.

“Sometimes people get into it with the wrong idea but they quickly learn it’s not all about fighting, but about bettering yourself,” Fryia said. “It’s the discipline, the hard work, the respect for others that are doing the same thing you are doing.”

He is excited about an upcoming charity event that will give some of his athletes a chance to showcase their skills. In conjunction with Algoma University, Steel City MMA will be hosting an event on March 14 at the Machine Shop, featuring adult, women and youth matches. Doors open at 6 p.m., with competition starting at 7 p.m. Tickets are $25 for adults and VIP tables/seating can be purchased for $400. Proceeds go to Algoma U and to help cover some of the travel costs for Steel City MMA.

Brent Fryia said he has eight matches locked in already, and is aiming for 12 altogether. Also expected to participate are female wrestlers Emily Duchesne and Natasha Doroodian.

“It’s a fundraiser and it should be pretty exciting,” Fryia said. “Algoma U has some very successful kids right now. We want to really showcase the wrestling side of things but we’re doing it with a fun, pro wrestling feel to it. Wrestling Tournaments normally aren’t that spectator-friendly but we’re gonna have the loud music, the big screen, kind of like the UFC and we really hope to showcase some of the young athletes wrestling in the Sault right now.”

Because local wresters normally have to travel to compete, Fryia is excited about putting on a show in Sault Ste. Marie. He comes from a wrestling family - his father Ted was a longtime coach and his brother Mitch was also an established wrester — and this will give parents and locals a chance to see their kids or friends in action.

“It’ll be fun,” said Fryia, who has two young boys of his own, Wesley and Wyatt. “There’s no doubt more than any other sport, people how have wrestled have unequivocally talked about the impact it’s had on their life. Even people who have only wrestled a year or two, they talk about how defining it was. There’s a different level of risk with wrestling and it gets you out of your comfort zone. In football, if somebody blows by you and scores a touchdown, well, it’s a team thing but in wrestling, you’re putting yourself out there to be physically dominated by someone else and that’s a whole other thing.”

For Fryia, who now teaches just 3/4 time at Superior Heights so he can focus more on his Steel City MMA club, it’s a safe bet that as long as he’s around, wrestling and mixed martial arts in Sault Ste. Marie will continue to flourish.