A fixture at Soo Greyhounds games, local couple continues to give back to the hockey community
Dec 21, 2019 12:30 PM By: Bill Montague 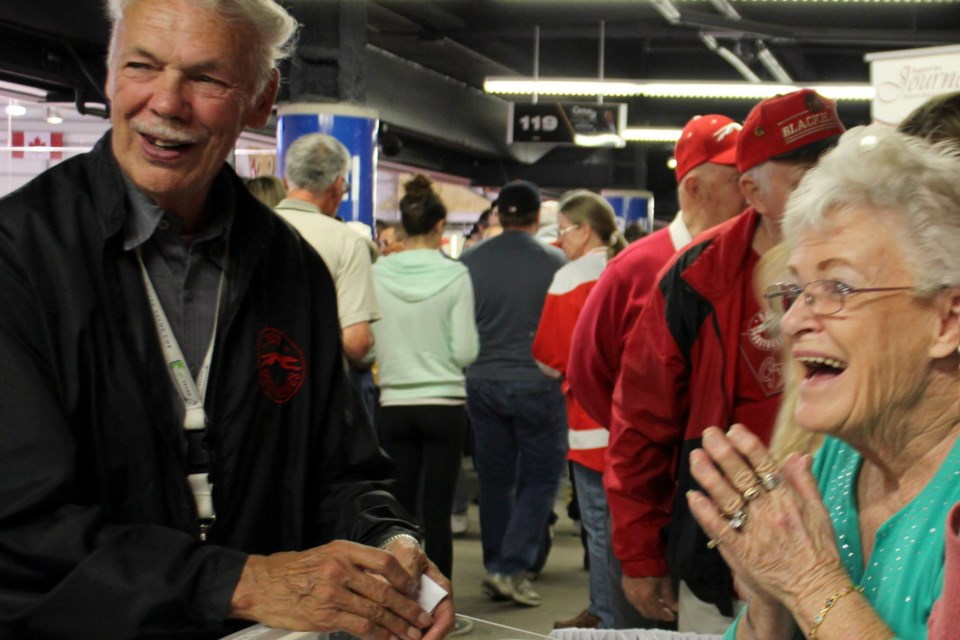 The step in their walk is much slower these days as age has robbed them of the fluidity they once exhibited, but John and Doreen Carlson aren’t about to let that stop them completely.

John, now 86, and Doreen, 78, have been fixtures at Soo Greyhounds hockey games for the past 40 years and their generous donation of time has benefited thousands of families over that span. The two represent the face of the Sault Major Hockey Association’s 50-50 draw, something they’ve been doing since its inception some four decades ago.

What began as a desire to give back locally after their son Derek played as a kid, has evolved into a major fundraising effort and little did the Carlsons know they’d be doing it for this long.

“We just felt that we wanted to give back to the community,” said Doreen. “Our son played all through the Pee Wee and Sault Major so we felt when he went off to university, we should get involved.”

And involved they’ve been. Aside from this season when Doreen was put on the injury shelf due to a nasty break of her femur bone (thighbone) in her right leg, the two have attended virtually every Greyhound game in 40 years. Doreen has broken the same bone twice in a year now, both due to falls, and just this week was released from Extendicare Van Daele Manor after five months of being out of her home – two in hospital, three in Van Daele. That injury snapped an incredible Ironwoman streak that would have made Brett Favre and Cal Ripken Jr. proud and John marvels over how his wife has been able to stay so active over the years.

“They had to operate and take all the hardware out that they put in last year and extend the (steel) plates another four inches,” John said. “She’s had two shoulders, two hips, two knees, two broken femurs and two back operations.”

The femur injury has taken the Carlsons out of action for most of this season, but they vow that once healthy they’ll be back full time again. John has been to just two games this year, mainly because he’s had to tend to Doreen at Van Daele.

“This is the most number of games I’ve ever missed,” said Doreen.

Said John: “Oh yeah, this is the most I’ve missed. I’ve missed very few over the years, if any at all.”

Ask John why they continue to support minor hockey by giving up so much of their time when they could be travelling and enjoying the warmth of the south, and there is no hesitation in his answer. It’s about giving back. It’s about helping families in need and creating memories for the kids in the community.

Aside from his 50-50 responsibilities over the years, John also served as SMHA president for 11 seasons. He said the idea of the 50-50 draw came up a long time ago when Sault Major had trouble paying its debt to the city.

“Lee Rodgers was the guy that got the 50-50 draw going,” John said. “He was president of Sault Major back then we every year they’d go to the city because they couldn’t afford to pay for ice time so the city picked up the tab. Lee talked to the Hounds and asked to do the 50-50 draw and they said OK but the city fathers had to OK it too. He told the city if they allow him to run the 50-50, he’d never knock on their door again and that has held true ever since. We have always paid our bills.”

For the Carlsons, it’s only fitting that so much of their life has been spent at the arena. After all, they met during an ice skating session when Doreen was just a teenage and, as she tells the story, it was John who made the first move.

“We met at ice skating and then started roller skating,” she said. “He tapped me on the shoulder one day and said ‘Hey you want to skate’ and that’s how it all started. We got engaged on top of a ferry going across the river.”

Fortunately for Sault Ste. Marie, that engagement led to 60 years of marriage and thousands and thousands of dollars raised for local hockey.