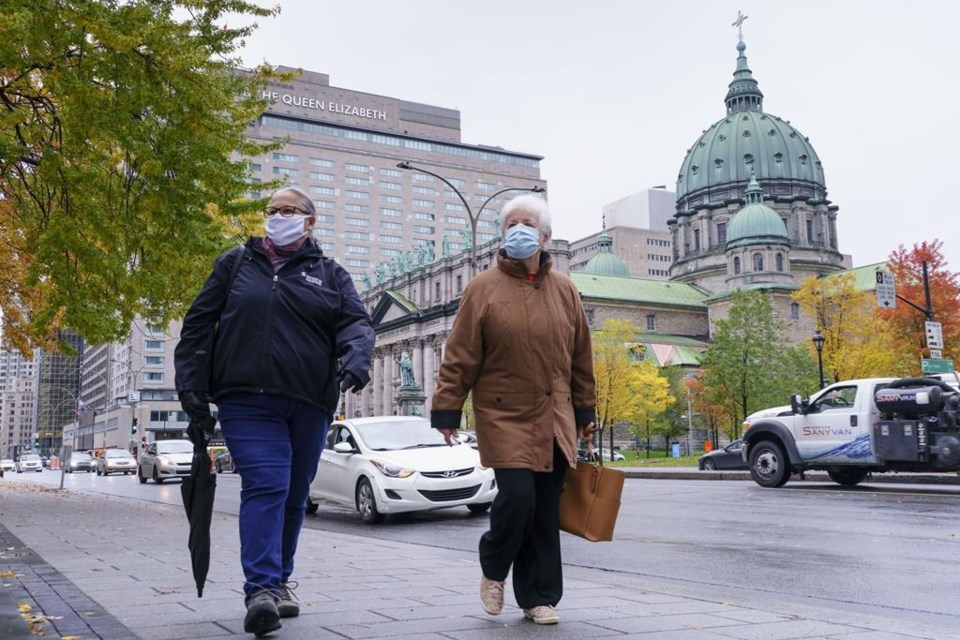 Legault imposed a 28-day partial lockdown on cities such as Montreal and Quebec City on Oct. 1, shutting gyms, bars and entertainment venues and banning most indoor and outdoor gatherings outside work settings.

Quebec reported 1,033 new cases of COVID-19 Thursday and 20 additional deaths attributed to the novel coronavirus. The province has reported about 1,000 new cases every day since the end of September.

Legault said given the fact the infection rate is stable and not declining, Quebecers need to reduce their contacts instead of increasing them.

"Twenty new deaths a day isn't acceptable," he said, adding that the odds are low that the restrictions he imposed at the beginning of the month would all be relaxed by Oct. 29. He said, however, that he planned on waiting until the beginning of next week to make a final decision.

The premier said it's not restaurant owners but their customers who he thinks won't follow public health directives.

"It's a question of risk," he said. “At this time, we need to reduce even the risk of contact because we cannot afford to continue having about 1,000 new cases every day,” he said.

The company said one worker died Wednesday after testing positive the day before.

Mireille Gaudreau, a spokeswoman for the regional health authority, said in an email that health officials are trying to determine whether the worker's death was caused by the coronavirus. She said 159 workers were tested on-site and about 15 other people were identified as possible contacts and are isolating for 14 days.

The Olymel Vallee-Jonction union, which represents 1,050 workers at the plant, has called for the facility to be temporarily closed. It said in a statement Wednesday that sanitary measures put in place during the first wave of the pandemic had been relaxed over the summer.

Olymel spokesman Richard Vigneault, however, said public health officials have not recommended the plant, located 55 kilometres southeast of Quebec City, be closed. In an interview Thursday, Vigneault said workers are being encouraged to get tested and that the company is following public health directives.

Health Minister Christian Dube told reporters Thursday the province is doing a better job controlling the spread of the virus in long-term care homes compared to its handling of the pandemic last spring.

Fifty days into the first wave of the pandemic, "we had roughly 100 outbreaks and 2,700 people were affected," Dube said.

In mid-October -- about 50 days into the second wave -- there are 327 active cases of COVID-19 in those facilities. "It's almost nine times less," he said.

Public health authorities said Thursday the number of hospitalizations declined by 12 to 553, while the number of people in intensive care rose by seven to 101.