TORONTO — Ontario expects 65 per cent of adults to have their first dose of a COVID-19 vaccine by the end of May and is working on a plan to offer Pfizer-BioNTech shots to children aged 12 and older based on new federal approval.
May 5, 2021 4:48 PM By: Canadian Press 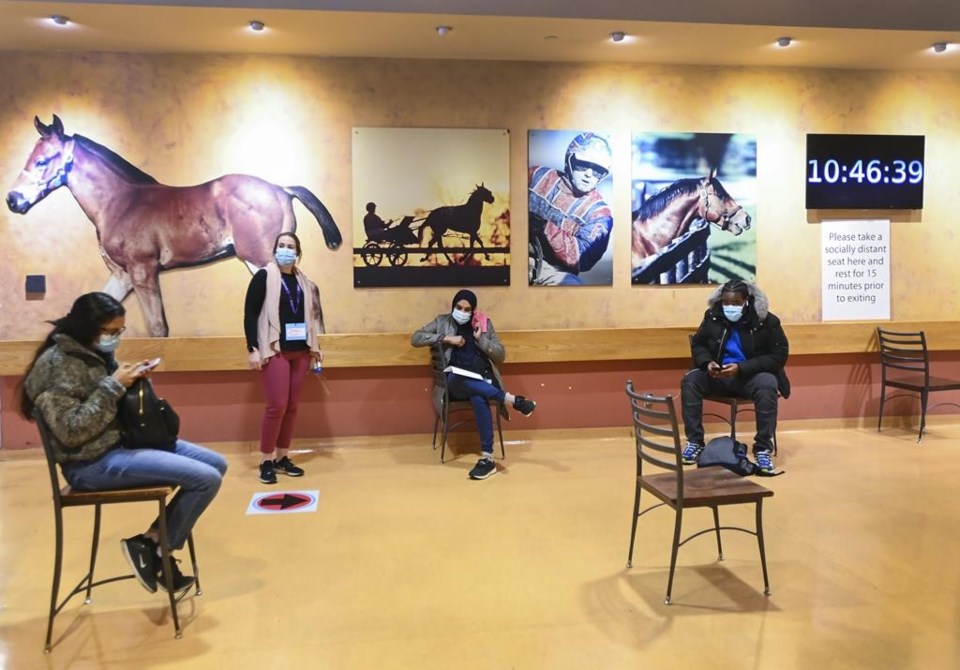 TORONTO — Ontario expects 65 per cent of adults to have their first dose of a COVID-19 vaccine by the end of May and is working on a plan to offer Pfizer-BioNTech shots to children aged 12 and older based on new federal approval.

Health Minister Christine Elliott said the revised vaccine target will mean 7.9 million people should have their first dose this month. That comes less than a week after the government said all adults would be eligible for a vaccine starting the week of May 24.

"The light at the end of the tunnel grows brighter with every vaccine administered, and together we can stop the spread of COVID-19," Elliott said.

The province, which is currently vaccinating residents aged 55 and older in all areas and those aged 18 and up in hot spots, is set to expand access to shots on Thursday.

People aged 50 and older, those with high-risk health conditions, and a number of employees who cannot work from home – including those in the education, child-care, food and manufacturing sectors – will be eligible to book vaccines across Ontario.

Elliott said the province was also "actively" working on a plan to vaccinate children aged 12 and older following Health Canada's approval Wednesday of the Pfizer-BioNTech shot for that age group. She did not, however, provide a firm timeline for that plan.

"We want to make sure that our young people are protected from COVID as well," Elliott said. "We've already been in conversations, discussions with the Minister of Education to make sure that we can start as soon as possible."

Elliott said the plan could see children aged 12 and older offered their first dose of a COVID-19 vaccine in schools, with a second dose given before the new school year begins in September.

She added that the province was also working to ensure education workers are able to get a second shot of a COVID-19 vaccine before September.

All schools are currently teaching classes online as the province remains under a stay-at-home order due to high COVID-19 rates.

The province also said it was adding new pathways for people in hot spots to get vaccines, with 10 employer-led vaccination clinics planned in the coming weeks including with the Ontario Food Terminal, Walmart Canada, and Loblaws.

It will also launch mobile vaccine units that will start visiting small and medium-sized workplaces in Toronto, Peel and York regions on Friday.

Green party Leader Mike Schreiner said he's glad to see mobile units are being sent to high-risk workplaces, but criticized the government for moving too slowly to get shots to those settings.

"It’s been clear for months that workplace spread is driving COVID transmission in Ontario," he said. "The government’s delay in getting vaccines to those who need them most is making the pandemic worse."

Ontario is sending half its vaccine supply to hot spots this week and next – up from its previous 25 per cent allocation – following a recommendation from the province's science advisers to allocate shots based on transmission rate rather than age group.

In Peel Region, one of the province's hardest-hit areas, the mayor of Mississauga urged the government to keep sending half of its vaccine supply to hot spots, saying it was in Ontario's best interest.

"We're holding up the province right now from getting their lives back to normal," said Bonnie Crombie. "The faster everyone in a hot spot is vaccinated, the faster the rest of the province can return to the new normal."

Crombie also said Peel will be offering vaccines to all residents aged 18 and older – not just those in hot-spot neighbourhoods – starting Thursday, weeks ahead of the province's schedule.

Meanwhile, the province also said that by the end of the week more than 2,500 pharmacies will be ready to administer vaccines, with 60 in hot spots offering Moderna shots.

More than four million Pfizer doses are expected in May, followed by more than 3.7 million doses in June.

Ontario is also now expecting an additional shipment of approximately 388,000 Moderna doses in May. A shipment of 116,000 Johnson & Johnson shots is also expected to arrive in May, and the province said it will share more information on use of that vaccine in the coming days.

Ontario has given out a total of nearly 5.6 million doses so far.

Premier Doug Ford's government has been criticized for a slow and disorganized vaccine rollout, but the province has blamed Ottawa for failing to provide a steady supply of doses.

Repeated delays in vaccine shipments appear set to resolve, but the province has cautioned that its plan, and goals, are contingent on supply.

The province reported 2,941 new cases of COVID-19 on Wednesday and 44 more deaths linked to the virus. It said 2,075 people are hospitalized with the virus, with 882 people in intensive care and 620 on a ventilator.

This report by The Canadian Press was first published May 5, 2021.