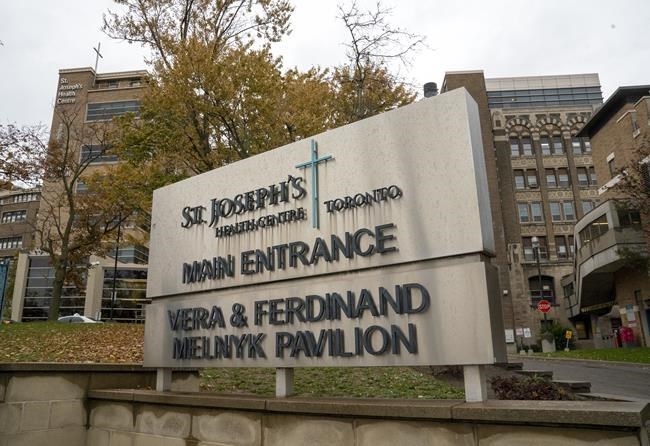 TORONTO — Two more hospitals in Toronto declared outbreaks of COVID-19 on Thursday, joining a growing number dealing with infections spreading within their walls.

The latest outbreaks mean at least six hospitals are dealing with outbreaks in Toronto, which is one of the province's COVID-19 hot spots.

The Scarborough Health Network said its general hospital had closed the unit experiencing the outbreak to new admissions in order to protect patients and staff.

Meanwhile, the University Health Network said the outbreak at the  Toronto Rehabilitation Institute involved patients at the musculoskeletal, multisystem and geriatric rehab in-patient unit at the hospital's University Centre site.

Spokeswoman Gillian Howard said staff and patients in the unit, as well as a neighbouring one, were all being tested and monitored.

An outbreak is declared when two or more people who could have reasonably caught COVID-19 in hospital test positive within 14 days.

CAMH said one additional patient had tested positive in the outbreak at its downtown Toronto site, bringing the total number of cases to six at two units

"CAMH has implemented standard infection prevention and control procedures for respiratory outbreaks, including closing both units to admissions and transfers," it said in a statement

"I think anytime we see an outbreak in any kind of a health-care setting, it's concerning," she said Thursday. "It's something that we're following very closely and if they need support, of course, we're there to provide it to them."

Epidemiologist Dr. David Fisman said that while the hospital outbreaks in Toronto are concerning, it is known that health-care settings have more risk of exposure to infectious diseases.

"I don't think anyone's particularly a bad actor or negligent here. It's just, this is the nature of the beast,'' said Fisman, who also serves as an infectious diseases consultant at Michael Garron Hospital in Toronto.

He said he would like to see more efforts to trace the source of the outbreaks at the hospitals, as well as the use of antibody testing to indicate overall infection rates in such settings. He added that being transparent about outbreaks in health-care settings is very important.

- with files from Adam Burns.

Note to readers: This is a corrected story. An earlier version had an incorrect number of total cases for the outbreak at CAMH.