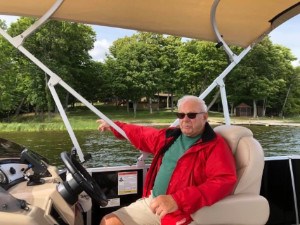 Clare and Bonnie came to Espanola in 1965 to purchase the local Canadian Tire store. It was to be a temporary move after working in the family CTC store in Sault Ste. Marie for many years. As plans often go, things changed and 29 years later Clare retired from CTC in 1994 to enjoy time at his favourite place, his cottage at Whitefish Falls. Over the years he was an active member of the Lions Club, enjoyed blooper ball, golf and fishing. The highlight of his early retirement years was Thursday fishing night with the crew at Red Deer Village. Many fun evenings were spent with Sheldon Brouse, Grant Moffatt, Glenn Newton, Stan Pawlowski, Harvey Dodge, Kelly Orr, Jim Wilkin, Kenny McNally, Wayne Craig, John Perfetto and Eric Bukowicki to name a few.

Those who knew Clare and those who were employed at the store over the years knew him to be a kind and easy going man, always interested to chat and listen to a story. He will be sadly missed by family and friends, and his grand dog Hazel.

The family has requested that donations be made to the Whitefish Falls Community Centre, as the village was Clare’s favourite place and considered home.

There will be no visitation or service at this time due to the current Covid 19 situation and Clare’s wishes. A celebration of life will be organized in his honour at a later date. Arrangements by BOURCIER FUNERAL HOME Ltd, Espanola

GREGORINI, Robert (Bob)
One year ago today you were taken away from us. You we're an amazing son, ...
Jollineau (Gloria)
In memory of a dear mother and grandmother who passed away July 12th, 1999: Our ...
De SIMON, Frank, Algesa and Chuck
In loving memory of our parents, Frank (July 12/03), Algesa (Feb.22/03) and our ...
WILSON, Joy
One year ago Mom peacefully left us behind to be with her Saviour and guide us ...