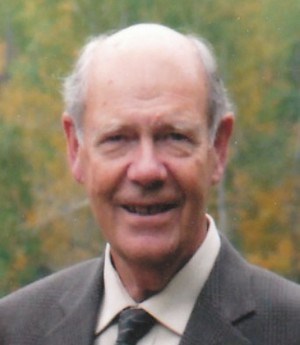 It is with great sadness that the family of Norman Stirling McIntyre
announces his passing on Tuesday, January 12th, 2021 at Guelph General
Hospital.

Norm was born and raised in Macklin, Saskatchewan. He met his wife
Thelma Everitt in Saskatoon and his banking career with RBC soon brought
them to Barrie. After moves to Corunna, Goderich, Sault Ste Marie,
Sudbury and Huntsville, Norm and Thelma returned to Barrie for their
retirement years. More recently Norm and Thelma lived in the Village by
the Arboretum in Guelph. Norm was an active member of the Collier Street
United Church, and many service clubs and enjoyed golf, curling and
bridge.

Norm is survived by his devoted wife of 62 years Thelma, children Lynda
(Ron) Spencer, and Scott (Clare) and daughter-in-law Denise. He will be
fondly remembered by grandchildren Danielle, Sydney, Neva, Sarah and
Andrew, his brothers Ian, Murray, Gary, Keith, and brother-in-law Ted
and their extended family members.

A celebration of life will take place when it is safe to do so.
As expressions of sympathy, donations to the Alzheimer’s Society or
Canadian Cancer Society would be appreciated by the family. Cards are
available at the funeral home (519-822-4731).

SICOLI, Maria
March 8th... the day the world celebrates and acknowledges the strength, ...

TESKE, Irene
You were exceptionally kind and caring with an infectious laugh and most ...
DAWSON, Mildred
Missing loving mom and grandmother..passed away March 8th..2003..missed by your ...
FRECH, Tom
“Say not in grief, ‘he is no more’ but in thankfulness that he was.” We are so ...

JAKOMAIT, Susan
Our dear sister Susan, left us one year ago. Her suffering ended. We all miss ...