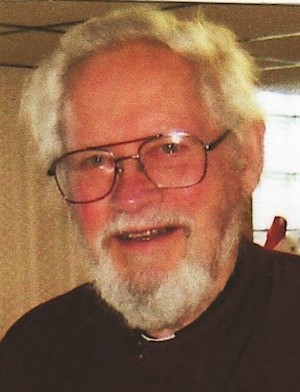 The Very Reverend Father Christopher Edward F. Mantle fell asleep in the Lord on Monday, December 4, 2017, in his 90th year. He was predeceased by Maria (Ingrassia), his beloved wife and companion of 56 years. He is remembered by his loving children, Kathleen (Wayne Barkel), Nancy (Ian Jacques), Edward (Sopa Luekhamhan), and grandchildren, Erin, Erik, Michael, Mark, Matthew, Adam and Kallayakorn, great granddaughter, Abigail, family members, Susan Minardi, sister in law, Vincenza DiGennaro, and many nieces and nephews. He will also be remembered by his many parishioners, friends and neighbours who lovingly supported him for years after the loss of Maria. Father Christopher was an avid outdoorsman and cross country skier who enjoyed his home for many years in the Algoma District with his beloved Maria. An ardent conservationist, Father Christopher worked for the Ministry of Natural Resources for 26 years before he felt called to the ministry. He took an early retirement and entered Holy Cross Greek Orthodox School of Theology in Brookline, Massachusetts. He was ordained to the deaconate in 1981. In 1982 he graduated with a Master of Divinity, and was ordained to the priesthood. With the support and guidance of Greek Orthodox Metropolitan Archbishop Sotirios, Father Christopher served the Greek Orthodox Christian communities of Sudbury, North Bay, Sault Ste Marie Michigan, Sault Ste Marie Ontario and Wawa. Friends and parishioners may call for visitation and prayers on Monday, December 11, 2017 from 6:00 to 8:00 pm., at ST. MARY’S UKRAINIAN CATHOLIC CHURCH, 293 St. Georges Ave. E., Sault Ste Marie, Ontario. The funeral service will be held at ST. MARY’S UKRAINIAN CATHOLIC CHURCH on Tuesday, December 12, 2017 at 1:00 pm., with Metropolitan Archbishop Sotirios presiding. Spring Interment Goulais River Cemetery. In lieu of floral tributes, memorial donations to the Sault Area Hospital, ARCH Hospice, Greek Orthodox Churches or charities of your choice, and daily acts of kindness to those in need, would be appreciated. The family also wishes to express our gratitude for the care, love and support shown to Father Christopher over the years by his friend and neighbour, Mr. Lynn Dunne, his brother in Christ, Father Jaroslaw (Jerry) Lazoryk, and Metropolitan Archbishop Sotirios. We are also grateful to the many health care professionals involved in Father Christopher’s care over the years. Arrangements entrusted to Northwood Funeral Home Cremation and Reception Centre (942 Great Northern Rd 705-945-7758).

Oscar Herzog
In loving memory of my wonderful Dad Hard to believe it’s been 9 long years ...

Ray DiPasquale
In loving memory of a dear father and Nono who left us six years ago Sad are ...

Charles Plaskett
Dad its been 2 years that you left us and we are missing you each and every day ...

MYLLYLA, Irene
Dear Sister, In life we loved you dearly, In death we love you still. In our ...

TAYLOR, Ron
We think about you always, we talk about you still . You have never been ...