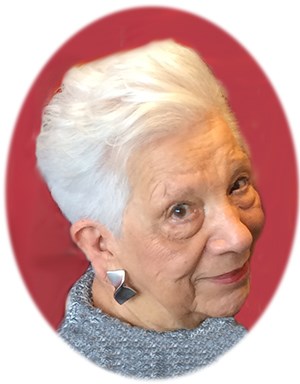 Predeceased by her loving husband Mike, Anne devoted her life to her four children, Rosanne (Cooper), Karen, Frank and Kenneth. A cherished grandmother to Matthew, Sarah, Michael, Catherine, Benjamin and Scott. A loving daughter to the late Rose and Robert Malesh, sister to the late Sam Malesh (late Rusty), dear cousin to the late Anne, Walter, and Angelo Glavas.  She will be lovingly remembered by her niece, Rosemary and nephews, Rob, Rick and Jim. Deeply supported and loved by her small but mighty tribe of late (best) friends, Blanche, Florrie and Aurora, Anne always held close the memories of her years growing up in Sault Ste. Marie, including her marriage to Mike and the arrival of their four children. Upon the sudden death of Mike in 1966, Anne, at the age of 39 was courageous as she adapted to single parenting and became a role model for all who knew her. She fearlessly encouraged her children to be independent, to always embrace learning and education and to foster confidence through achievement in work and in life. Anne’s career with the Federal Government epitomized what she sought for her children. She was resilient, raising her young family in the Sault while managing the demands of work. Anne’s promotion to Field Officer was the catalyst for her move to London Ontario in 1975, where she was given supervisory duties in Tillsonburg and St. Thomas, along with her responsibilities at the London office. Most recently, Anne resided at Balmoral Place in Collingwood, Ontario where she was lovingly cared for by the staff who deeply appreciated her witty stories and her sense of humour. The family would like to thank Dr. Christopher Kapusta for his kindness and attention to Anne. We also wish to acknowledge the staff at Hospice Georgian Triangle’s Campbell House in Collingwood for their outstanding care of Anne and the family during her final days. Memorial donations may be made to The Hospice Georgian Triangle Foundation. A celebration of Anne’s life will be held in Sault Ste. Marie for close family and friends at a future date to coincide at a time when people can safely congregate. Arrangements entrusted to Northwood Funeral Home Cremation and Reception Centre (942 Great Northern Rd, Sault Ste. Marie 705-945-7758).

MARIOTTI, Rosemarie
In loving memory of a dear sister, sister-in-law, auntie and great aunt, who ...
MARIOTTI, Rose-Marie
It's been one year since the angels took you home with them. Not a single day ...

SANTANA, Dominic
In loving memory of a dear brother, brother-in-law, uncle, and great-uncle, who ...

WRIGHT, Don
We lost you August 10, 2012 Hard to believe that it is 8 years already. You are ...
CHILDS, Gloria
7 years have come and gone - your memory lives on in the lives of your children ...