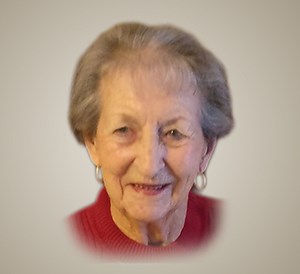 Dora's family regrets to announce that she left us on October 7, 2019 after a short illness, at the wise age of 96.

Staff at Extendicare Southwood Lakes expected that she would soon bounce back from Windsor Hospital to trounce the other residents at Bingo as usual, but alas her time had come.  Dora was predeceased by her husband Sid, five siblings -May, Sonny, Dorothy Lilian, Sidney and Ron - and is survived by her sister-in-law Hilary Bly.

Born in London, England, Dora's experience during WWII as a Leading Aircraft Woman in the WAAF taught her great resilience. She swore that she would never go out with an RAF pilot, but ended up marrying RAF Flight Lieutenant Sid Good and emigrating to Chatham, Ontario, with daughter Ann and son John in 1957. Cindy and Pauline joined the family when they moved to Sault Ste Marie. Decorator extraordinaire, Dora has always been able to stretch a budget - sewing clothes, reupholstering a tired sofa, and cultivating a luxurious garden. Bowling, camping and travel in the Caribbean, Europe and Ivory Coast, Argentina and India with Sid were highlights of their retirement years. She learned to swim at the age of 56 and became fairly proficient with emails. Once in a retirement home, she turned to painting acrylics and pastels. Dora could see the funny side of many a situation and is known for her laugh.

Dora's family would like to express their profound appreciation of the superior care, compassion and companionship she received, especially from the Essex team at Southwood Lakes, over the past 18 months. Cremation has taken place in Windsor and a celebration of life will be scheduled at a later date to allow for family and friends to plan their travel. Messages to the family can be addressed to jgoodsolutions@gmail.com. Memorial donations are welcome to the Canadian Cancer Society.

GREGORINI, Robert (Bob)
One year ago today you were taken away from us. You we're an amazing son, ...
Jollineau (Gloria)
In memory of a dear mother and grandmother who passed away July 12th, 1999: Our ...
De SIMON, Frank, Algesa and Chuck
In loving memory of our parents, Frank (July 12/03), Algesa (Feb.22/03) and our ...
WILSON, Joy
One year ago Mom peacefully left us behind to be with her Saviour and guide us ...
MORTIMORE, Robert
In loving memory of our special son brother in law and uncle who passed away ...