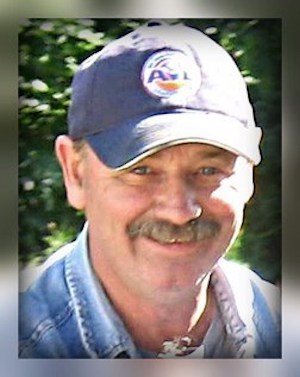 In a typical but elongated “Boston Goodbye”, whereby you need to go but don’t want to go, Dennis passed away at Algoma Residential Community Hospice, comforted by a room completely full of family and friends.
Since first being diagnosed with cancer a year ago, Dennis was continuously in severe pain but courageously did what was asked of him from day one, to fight the fight. All the while, despite the pain and continual setbacks, he maintained his sense of humour and courteously expressed his appreciation to his nurses, care givers, friends and anyone who came to be with him. When someone said “Love you”, he would always say “Love you more!”
Dennis had a tremendous love for his wife Tina, his son DJ (Nicki), and his daughter Carrie (Jeff). He loved his grandkids Jacob, Asia, Grady, Noah and Gracie, and had many special moments with them like taking them on tractor rides. He loved his mother-in-law Pat (late George), and brother-in laws late Michael, George (Carol) and Tim (Donna) McCreight. He loved his siblings, his nieces, nephews, and cousins, and his many friends. He loved his work, loved going to the cottage and hunting and fishing. He just loved life too much to let it go without a courageous, headstrong fight.
Dennis was the third child of Toby and Minerva and was the grandson of George and Bette Furkey and Hector and Helen Boston. He was also the step-son of Don Handley (Rhonda (Claude), Karen). He was affectionately identified as D3 in the family of six kids, behind siblings D1-Danny (Janna), D2-Doran (Nadine) and ahead of D4-Debbie Bouchard (Ronnie), D5-Donna (Al) and D6-late Douglas (Darla).
As a kid, he was known as Dennis the Menace as he always seemed to be in trouble. He had a mischievous, inquisitive mind that got him into trouble. If he didn’t cause the trouble, his older siblings made sure that he was blamed for it. He carried this on by calling those he loved by random names, seldom calling them by their actual name.
Dennis was a hands-on-learning type of guy so instead of completing high school, he opted to get an apprenticeship in the autobody repair business where, he became well respected and accomplished. In his early days, Dennis and buddies Jimmy Carbone, Donnie Robert and Brian Morrar would work endless hours on their race car called the Streak. That’s when they met Cindy Robert and her cousin Tina. Shortly thereafter, Jimmy married Cindy and Dennis married Tina and have remained best of friends to this day.
Dennis and Tina built a house on Carpin Beach Road, the homestead of his great-grandfather, Alex Furkey. Later, in an adjoining lot, he literally built his current home from the ground up with the help of DJ, family and friends, learning how to do seemingly endless tasks to code. If you knew his grandfather George Furkey, you would know what type of guy Dennis was. They had a gregarious, enthusiastic and infectious personality and Dennis would always greet someone with his spaced tooth grin that was partially obscured by his bushy moustache. Like George, he was hands-on, always inquisitive and always fixing things.
Dennis was always entertaining. Telling one of his many stories or jokes, he would be throwing his hands around wildly, would rub his watery eyes from the laff tears and with a wide grin, would almost always include a mild curse word in the conversation. But Dennis would not hesitate to say whatever was on his mind and often in a colourful language. Once said, he moved on without holding a grudge.
After many years in the autobody industry, Dennis wanted to transition to something different and spent 12 years on and off between the tube mill and autobody repair. He then went to Sault College where he not only earned his high school diploma, but received a diploma for the Computer Engineering Technician Program. Eager to learn more, he continued with the advanced level program, earning a Computer Engineering Technology Program diploma. Within these programs, he learned how to build/repair computers and became competent in computer diagnostic software. He was in his glory troubleshooting technical computer issues or repairing complex circuits and would be like a pitbull biting into the challenge and not letting go until things were resolved.  If you ever asked him what he was doing, he would go into a very detailed explanation of the complex intricacies involved, somethings only the cast of the Big Bang Theory would understand.
Dennis started working for Algoma Industrial supervising the body repair shop. His role evolved into the industrial side of the business, working along side Jerry Artuso. Dennis took on a supervisory role and, as a workaholic, he wore many different hats, taking on additional duties for a variety of other job functions such as quoting on contracts and projects, dealing with labour negotiations, worker safety, environmental controls and co-ordinating projects at various industrial locations. He was affectionately known there as Papa Smurf.
It took many years, but finally Dennis was pried away from work and would eventually get to enjoy few weeks each year in Florida with his friends and siblings.
Dennis will be remembered because he touched so many lives. The nursing and care staff at Arch, SAH and Sudbury Health Science North made his last days the best they could be.
In keeping with Dennis’s wishes, there will be no service but a Celebration of Life will be held on Sunday, December 8, 2019 from 1pm to 4pm at the Legion (96 Great Northern Road).
It would be appreciated if memorial donations can be made to ARCH, referencing the memory of Dennis Boston.  Arrangements entrusted to Arthur Funeral Home - Barton & Kiteley Chapel (492 Wellington St. E. - 705-759-2522).