VANCOUVER — Kendall Waston took a touch with his foot, another with his chest and then cooly fired past the goalkeeper. Not bad for a hulking defender who up until that point had only ever scored with his head in Major League Soccer.
Jun 3, 2017 9:59 PM By: Canadian Press 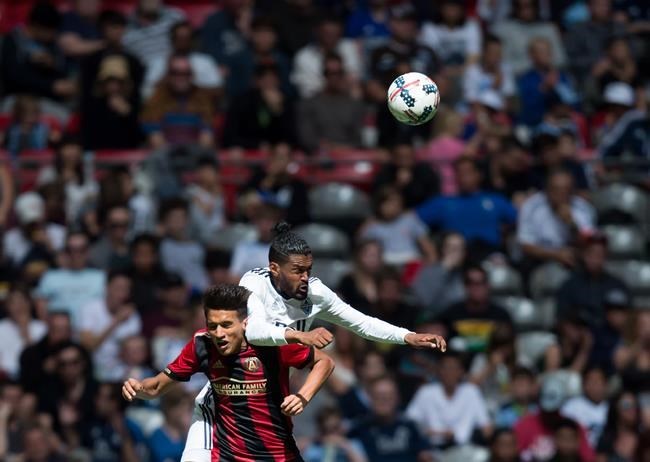 VANCOUVER — Kendall Waston took a touch with his foot, another with his chest and then cooly fired past the goalkeeper. Not bad for a hulking defender who up until that point had only ever scored with his head in Major League Soccer.

The Costa Rican international added another in the first half to erase an early deficit before Fredy Montero snapped a five-game goal drought as the Vancouver Whitecaps defeated Atlanta United 3-1 on Saturday afternoon.

Waston, who was up the field for a corner kick, cancelled out Greg Garza's opener after collecting a cheeky chip over the top from Andrew Jacobson and patiently beating Atlanta goalkeeper Alec Kann in the 31st minute. His previous seven goals in MLS had all come on headers.

"In Costa Rica, a long time ago," Waston said when asked if he remembered the last time he scored with his feet. "The most important thing is everybody worked very hard."

Having done his best impression of a striker for his first goal of the season, Waston returned to a more familiar manner of scoring in the 44th minute to give the Whitecaps (6-6-1) their first lead when he rose to meet Cristian Techera's corner kick and headed past a helpless Kann.

The six-foot-five, 215-pound Waston was also a force at the other end against Atlanta, winning almost every ball that came his way to go along with a goal-line clearance in the second half.

"Kendall has been absolutely excellent," said Whitecaps head coach Carl Robinson, who handed the 29-year-old the captain's arm band for 2017. "He's grown into that role. He's been a monster for us."

Vancouver was coming off a frustrating 1-0 home defeat to D.C. United last Saturday before getting knocked out of the Canadian Championship on Tuesday in Montreal against the Impact with a lineup of mostly inexperienced and fringe players.

An expansion team led by former Argentina and Barcelona manager Gerardo (Tata) Martino that has taken MLS by storm with a free-flowing and attacking style, Atlanta entered play tied atop the league with 27 goals and had won consecutive games at home by a combined 7-2 score.

"I said to my son today as I'm walking in: 'I'm trying to pick my wits against a top manager whose managed at the highest level,'" said Robinson. "His football IQ is phenomenal."

United (5-5-3) opened the scoring in the seventh minute through Garza on a sequence where Vancouver's defence was caught napping.

Julian Gressel took a pass on the right from Miguel Almiron before firing a low cross to the far post to the completely unmarked United left back, who beat Whitecaps 'keeper David Ousted for his first of the campaign.

"I thought character-wise ... we responded very well," said Robinson. "We didn't get caught up. It's easy when you're at home to play gung-ho, and if you do that against them they'll pick you off because they're really excellent with the ball.

"I thought it might come down to set pieces, and I was right."

Down 2-1 after Waston's double, Atlanta nearly tied the game before halftime, but Carlos Carmona's header off an Almiron free kick rattled the crossbar and stayed out.

The Whitecaps stretched their lead in the 68th minute when Montero blasted a rebound into the roof of the net after Kann made an incredible save on Tim Parker's header off another corner.

"I'm proud of our team," said Montero. "(Falling behind) against the quality players Atlanta has, it's not easy to come back."

A high-priced designated player brought in on loan to help solve Vancouver's striker woes this season, Montero hadn't scored since April 22 and crumpled to the turf earlier in the half when his free header flashed over the bar.

Television replays showed Parker's effort might have crossed the line before Montero pounced, but Robinson was eager to have the star forward claim his fifth goal of the campaign.

"Other people get more uptight about it than Fredy and me," Robinson said of Montero's recent struggles. "I'm sure he's been through these scenarios in his career before."

Atlanta came close to getting back in the match in the 76th when Almiron's shot hit Ousted and then the post before Leandro Gonzalez Pirez's header was cleared off the line by Waston. Referee Robert Sibiga initially awarded United a penalty on the play, but quickly reversed the call for a Vancouver free kick.

Robinson said Sibiga pointed to the spot when he saw Montero go down, not realizing it was at the Whitecaps' end of the field.

"It was a great explanation," said Robinson, who had five penalties called against his team over its previous five games in all competitions. "I really appreciated it."

Notes: Whitecaps midfielder Nicolas Mezquida will miss up to eight weeks with a sprained ankle suffered in the loss to Montreal.  ... After five games in 15 days, Vancouver doesn't play again until June 17.