Blayre Turnbull knows how it feels to lose a parent at a young age. Her mother died of cancer when she was a teenager.
Jun 2, 2020 5:12 PM By: Canadian Press 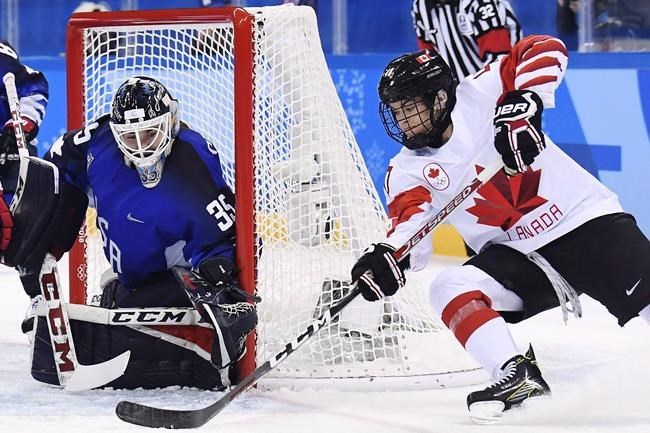 Blayre Turnbull knows how it feels to lose a parent at a young age. Her mother died of cancer when she was a teenager.

So the Canadian women's hockey team forward wanted to help children who lost a parent in a mass shooting in her home province of Nova Scotia.

In one of the worst mass killings in Canadian history, a gunman murdered 22 people during an April 18-19 rampage.

Turnbull, from Stellarton, saw fundraisers springing up on social media. She wanted to start one of her own.

The 26-year-old raised over $20,000 in just one week via her "Hope For Home Helmet Sticker" campaign.

Designed by Karley Gittens, who is Canadian teammate Victoria Bach's aunt, the stickers were produced in New Glasgow, N.S.

"Each kid who lost a parent or both their parents in the mass killing that took place back home, I was going to give each kid just a sum of money they could use to put towards a sport or any extracurricular activity that they wanted to start or continue doing," Turnbull said.

"There's around eight to 10 kids who will be getting the money, so they should be getting a little over two grand each. That hopefully will go along way in terms of covering any sports registration or maybe some equipment needs, or if they're going to play an instrument or anything like that."

Turnbull's mother Margie died of cancer when she was 15.

"A lot of what helped me stay on the right course and not turn down a dark road and start making poor choices was the fact that I was still so involved with extracurricular activities like hockey, soccer, rugby," she told The Canadian Press.

Turnbull capped her fundraiser after one week because it surpassed her expectations, but also because of the manpower it took to operate it.

"Since it was just me doing it all by myself, it was a lot of time spent on email," she said.

"I'd just started a new online class and with training ramping back up, I wasn't wanting to keep it going just because of how time-consuming everything was."

Turnbull was once cut from Canada's under-18 women's team, but went on to earn silver medals in three world championships and the 2018 Olympic Games.

She's compiled 11 goals and nine assists in 55 career games with the national team.

The five-foot-seven, 155-pound forward was named to Canada's roster for the 2020 world championship in Halifax and Truro, N.S.

The tournament was cancelled because of the COVID-19 pandemic, but her home province will get the championship in 2021.

When Turnbull suffered a tournament-ending injury in the 2019 semifinal — she was pushed head-first into the boards in the first period — head coach Perry Pearn said Canada lost "the conscience of the team."

Turnbull was an assistant captain to Marie Philip-Poulin during Canada's Rivalry Series against the United States this past winter.

"She is a great complement to Pou's leadership style," said former team captain and television commentator Cassie Campbell-Pascall. "They are a great balance for each other.

"The cool thing about Blayre is she didn't make an under-18 team like most of these players and yet found a way to improve and make an Olympic team. She wants nothing more than to win. Her work ethic is over the top."

Turnbull has split her time between Calgary and Kelowna, B.C., in recent weeks ramping up her training for a return to the ice.

She wants to head home to Nova Scotia soon to distribute the fundraiser's proceeds.

"Once more travel restrictions are lifted and it's safer to travel, I'm hoping to get back home for a couple weeks sometime throughout the summer," she said.

"Hopefully I'll be able to deliver the money to all the kids at that time."

This report by The Canadian Press was first published June 2, 2020