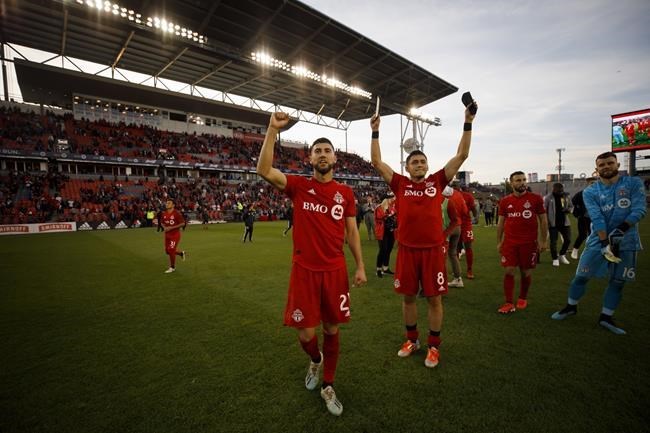 The 33-year-old Rooney, whose D.C. United visits Toronto in a first-round playoff game, is returning to England to join Derby County after the season.

Bradley's future is more mysterious. While his contract expires at the end of the year, the 32-year-old midfielder has elected to keep negotiations under wraps. The cone of silence has made for uncertainty, although the skipper seems keen to stay.

Bradley answered in the negative this week when asked whether he had considered Saturday could be his last home game at BMO Field.

"There's always moments to be sentimental and to think twice about things, to make sure that you enjoy certain things. And I find the right moments to do that," said Bradley, who has played 196 games in Toronto colours. "But I'm still in my mind very much operating under the assumption that there are more games to be played in that stadium. A lot more games."

"Ultimately any personal situations, anything like that take a back seat at moments like this," he added.

Bradley is making US$6.5 million this season, second only to LA Galaxy star Zlatan Ibrahimovic's $7.2 million. Whether TFC and Bradley's camp can come to a mutually agreeable number on a new contract will likely decide his future.

Bottom line, the captain is an integral part of the TFC culture.

"He's the glue between the offence and the defence. He's a true leader," said goalkeeper Quentin Westberg, who has known Bradley since he was 15.

"It's all about character and skills and he's a great mix. He's definitely crucial," he added.

The more immediate concern for Toronto is the health of star striker Jozy Altidore, who gingerly exited in the 70th minute of the Oct. 6 season-ending win over Columbus with a quad strain.

Altidore, whose 11 goals were second only to Alejandro Pozuelo's 12 for Toronto this season, saw some training time Friday.

"Every day is how does he respond to the day's work. We'll do another fitness test with him (Saturday) and see where we're at," said coach Greg Vanney. "It's for sure questionable going into (Saturday) but we're going to just play it by ear."

He conceded the burly striker would not be 100 per cent and "we're pushing the envelope if we decide to try him, at all."

"The question is what could we safely — for the player and for the team — even get out of him if we went with him (Saturday)," Vanney added.

Altidore said he is game.

Altidore is no stranger to heroics. Two years ago, hobbled by an ankle injury, he seemed destined to leave the Eastern Conference final against Columbus early. Instead he stayed on and scored the winning goal that sent Toronto to the MLS Cup final.

It's been a while since both teams lost although D.C. United's draw with FC Cincinnati on Decision Day, combined with the Toronto win over Columbus and Red Bulls loss in Montreal, allowed TFC to climb past D.C. into fourth spot to host the first-round playoff game.

TFC is also riding a five-game undefeated streak (4-0-1) at home.

Saturday's winner advances to play East-leading New York City FC next Wednesday in the conference semifinal with the game to be played at Citi Field due to the Yankees' playoff run.

MLS opted to shift the game from Yankee Stadium to allow time to plan for its playoff game, regardless of the status of the baseball playoffs. NYCFC also played at the Mets' stadium in the 2017 regular-season finale, against Columbus.

THIS SEASON: The two played to a goalless draw May 15 at BMO Field. On June 29 at Audi Field, a Wayne Rooney stoppage-time penalty cancelled out a Nick DeLeon goal in a 1-1 tie.

BMO FIELD FORM: D.C. has come away with points on five of its last seven trips to BMO Field, over the past five seasons, including two victories. The last two meetings have been draws.

IN EVENT OF TIE: Two 15-minute overtime periods will be played, followed by a penalty shootout if the score remains tied.